Mark used to manage this gourmet food store in Alexandria, Virginia.  Some weeks, his paycheck would actually be negative!  The house charges for food would often exceed his pay!


The gourmet food business is still thriving, even after it took a hit from the recession.  Upscale foods have taken off, and food shows on television are providing normative cues to people that they should spend more on special foods - often as a status symbol.

These are the sort of folks who call themselves "Foodies" - a term which makes me lose my appetite right away.  A real gourmet does not use the term, "Foodie"- excuse me!  Julia Child was not a "Foodie" - so let's just put that tacky, trailer-trash term where it belongs - in the dumpster behind Whole Foods.

And while we are at it, let's dump the term "Artisanal" - OK?  Domino's does not make "Artisanal" pizza, although I give them 5 points for at least trying to make something other than a salt lick in a cardboard box.

But getting back to gourmet food stores, they are a lot of fun - but are often wildly overpriced.  And we got into serious trouble there, when Mark, who was working the usual 10-12 hour days that they make "Managers" do (a neat trick, take some young kid, tell him he is a "Manager" or "Assistant Manager" pay him a salary, and make him work twice as hard for the same pay as an hourly would make).  He would be too tired to go shopping after work, so he would load up a basket with food items, including prepared meals and staple goods, and put it on his house charge account.

We ate well.   We gained weight.   He was making negative income.   The problem was, eating that way, every day, took up an awful amount of money.   And as he was making about $45,000 a year back then, it basically meant that his entire after-tax income was being spent on food.   Literally, this was "Whole Paycheck" shopping.  And this is not a sustainable model!

But for most people, buying food at such places was a matter of status.   Mark would recount how many people liked to have the white shopping bags with the prominent store logo on them.   I recall once, attending a furniture auction in Chantilly, and a young yuppie couple came prancing in, she displaying her Sutton Place Gourmet Shopping bag, with their sandwiches in it, prominently.  And like a bitch holding a Starbucks, she made sure to hold the bag up high, so everyone could see this.

It was funny, if it wasn't so pathetic - and typically Washingtonian.   Washington, D.C., is the land of "I'm better than you because I bought/own a...." and I am glad I escaped with my sanity (mostly) intact.

While a gourmet store may be a fun place to go once in a while to get certain things, it makes no sense at all, for basic staple items like paper towels, or milk.   And that is where we fell down.   As Mark worked there long hours, he did all his shopping there - including basic food items that you can buy at any grocery store in the world.

Since those days, much has changed in the grocery business.   Ordinary food stores now carry the salad mixes that only the upscale places once had.   And the cheese department in most stores (there is one, now, instead of just a shelf in "Dairy") has more than orange and white cheese.

In short, gourmet has now gone mainstream.   It is amazing to me, if we are shopping at Wal-Mart, how many items they have that "We used to carry at Sutton Place!"

So the overwhelming need to go to a gourmet food store is a lot less in our lives now.   You can get a good goat cheese at the Winn-Dixie or the wholesale club.  And many of the "prepared" items, well, we now prepare at home (knowing how they were prepared).  There are some places, too, that have gourmet or near-gourmet foods at more reasonable prices.  Trader Joe's often has very interesting stuff, priced on the budget of a college student.  Wegman's has nice stuff, although their prices are pushing it a bit.

When we go to gourmet stores today, well, the prices today seem somewhat obscene.   When you are in your 20's, prices don't seem like such a big deal.  After all, half the fun of being that age is trying new things and showing off how much you can spend, right?   Well, it was fun, until the bill came due.

We haven't shopped regularly at a gourmet store in more than a decade.   It was fun while it lasted, but in terms of real value, we were just kidding ourselves.   It was a status thing, plain and simple.   And we learned that good food is a lot more than the label on the bag where you got it from.   Far more than that.   But of course, a "Foodie" wouldn't get that, would they? 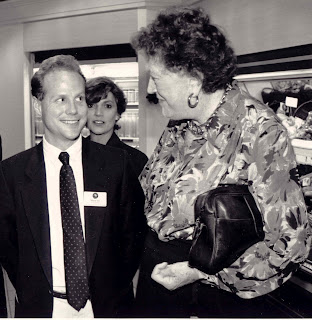 Mark See, circa 1990, At Sutton Place Gourmet.  I am not sure who the other two ladies are.
Newer Post Older Post Home