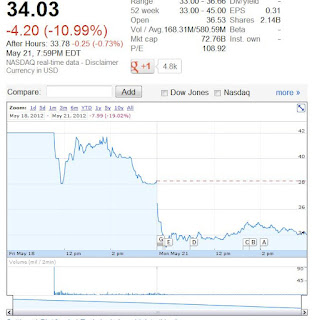 Whoops!  Another "Sure Thing" bites the dust.

Well, Facebook Face-Planted, and now the fingers are a-pointing.  Did the underwriter oversell the stock?  Should they have sold fewer shares at a lower price?  Maybe the "glitch" on the NASDAQ trading system is to blame?

Or maybe Facebook is just a shitty investment - overvalued by a factor of 10.   And gee, just like the housing bubble, if you bothered to read anything at all from anyone who cranked numbers on this, (as opposed to the media's "gee-whiz" articles) you would discover that, lo and behold, a lot of people saw this coming.   You just had to read the writing on the wall and not be distracted by the roar of the crowd.

The slump is likely to turn up the heat on Facebook to boost its performance by generating more revenue from its massive user base, which includes more than 900 million active users. The company's latest first-quarter earnings slipped 12% amid surging expenses.

Revenue actually fell compared with the fourth quarter, a decline the company blamed on "seasonal trends" in the advertising business and growth in markets where Facebook generates less revenue per user, according to a regulatory filing last month.

"The insiders made a ton of cash, but the investors who are probably Facebook users lost a lot of money, and it's going to affect their impression of the company," he said. Enderle added that he targets a "conservative" price between $18 and $20 based on the company's earnings and risk.


But hey, you still have your GOLD, right?  How's that doing?

Oh, sorry I asked.   Really bad day for the true-believers, ain't it?


But, of course, speculative gambling-like investments have to be better than plain old equities, right?

The Standard & Poor's 500-stock index added 20.77 points, or 1.6%, to 1315.99. The materials and information technology sectors led advances, with the latter snapping a 12-day losing streak, its longest ever.

In other words, No.  The stock market had quite a run since October, and in the last 12 days has been hammered, based mostly on fear.   But today alone, as Facebook fell flat on its face, the broader market took off again.   Because people realized that Facebook ain't "the next big thing" and moreover that the sky ain't falling, just yet.   Investing in moon colonies or underground bunkers are both bad ideas.


Diversification is the key to investing.  That and not trying to time the market.   Invest in a number of things, and get more conservative over time.


But walk away from anything advertised on television.  Once it is on the TeeVee, it is too late to invest.  And this is true for Facebook, Apple, or Gold.   When the gurus start hyping it, well, that ship has already sailed!