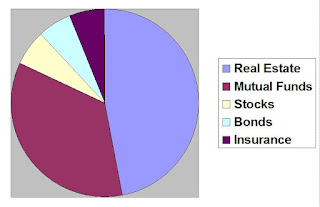 Your investment strategy depends a lot on where you are in life.  For me, my strategy is based more and more on conservation of assets, as well as reducing overall monthly cash-flow as I approach retirement.

So, how have I invested?  I have diversified as follows.  I am 52 years old, so I cannot afford too much risk at this point in my life, but I can afford some risk.  About 50% of my "investments" are in things that are pretty safe investments - things that will not go down in value over time, or at least not get wiped out.

1. Debt-Free:  Paying off debt and NOT paying interest is a 100% "safe" investment.  Investing in stocks that might return 10% annually while paying 17% in credit card debt makes no sense at all.   Owning your own home, free and clear, can be a good deal, as you save tons of money on interest, and don't have the mortgage monkey on your back.  Have a plan to get out of debt, over time.  Get debt-free and stay debt-free.  Live within your means.

2.  Real Estate:  About 47% of our net worth is in Real Estate - a paid-for house and an investment Condo in the DC area, that we rent to a friend at a break-even rate (don't think I am generous, the condo is now worth five times what I paid for it, and my friend paid off the mortgage over the years).  Real estate can go up and down in value, of course.  But it rarely goes to ZERO in value, except in Boom Towns.  Owning my own home, free and clear is a pretty "safe" investment, as is owning an investment property that has a zero carrying cost or makes a small profit.  Owning real estate that has a negative cash-flow is a bad idea, however.  Not having a mortgage saves me about $20,000 a year in interest!

My broker disagrees with this strategy (he thinks I should have a mortgage and invest that money with him!) and many folks will tell you the same thing.  After all, mortgage interest rates are at an all-time low!  But I would rather own my home outright than have hundreds of thousands of dollars in debt and as much invested in risky stocks.  Unless the stocks outperform the mortgage rate, you come out behind.  And if the stocks tank?  You end up totally screwed and out on the street.

And there is another reason for this:  As I get older, my income will go down, as I retire.   And as a self-employed person, having an onerous mortgage to pay, with no assure stream of income is, to say the least, stressful.   Coming up with $3000 a month to pay a mortgage means you have to consistently make well over $100,000 a year, which makes the IRS happy, as it boosts you into the next tax bracket.  But in terms of real wealth, it really doesn't do much for you.  I had a chance to live debt-free, so I took it.  Wouldn't you?

Eventually, the condo will be sold.  And someday, we may downsize to a smaller home.   In both cases, we will yield a nice amount of cash from both transactions, the latter of which will be tax-free.

Am I over-invested in Real Estate?  Perhaps.   But on the other hand, since the great declines of 2008, it isn't really going to drop much, at least in certain markets.  But again, people use FEAR as an investment guide, and most people right now are afraid of Real Estate.

3.  Mutual Funds:  Maybe 35% of my portfolio is in mutual funds, most of which have done well over the years.   We have several different funds - I think investing it all in ONE fund is asking for trouble.  Many folks online like to run down mutual funds.  Yes, they have fees and loads and are a pig-in-a-poke sometimes.   But on the other hand, trying to stock-pick on your own is something fraught with peril.   And the remaining investments out there?  Either wildly risky, or having ridiculously low rates of return.

Putting everything into one fund is not a good idea, I think, as you can easily lose it all when that fund tanks.  Many folks get greedy and put their money into a high-tech or overseas fund that had great returns - for the last five years.  Then a bubble bursts or investments go sour, and they lose it all.   Better to invest in a panoply of different types of funds than to put it all in one fund.

And, over time, you should have less and less in riskier investments, and put more into safe harbors.

4.  Direct Stock Ownership:  Maybe 6% is in stocks that I have purchased directly.  Some of these have done well, others tanked.  Overall, I am hardly outperforming my mutual funds.  What I have learned over time is that the amount of research needed to understand a stock is beyond the capabilities of the average investor.  Buying and selling stocks, for Joe Investor is like gambling.

And I have learned some hard lessons in this regard.  My self-traded IRA is not doing much better than Fidelity Equity Income or other mutual funds.   I have tried, in recent years, to sell off more speculative stocks (which were a mistake in the first place) and buy more steady, dividend-paying stocks.  This strategy has worked pretty well.

5. Corporate Bonds, Treasury Bills, CDs, Savings Bonds, Cash:  Maybe another 6%. Most of these are low-yield and safe investments, except the Corporate Bonds.  As I get older, I suspect more and more of my portfolio will end up here, particularly in government-backed issues, FDIC-insured CDs and the like.

6.  Whole Life Insurance:  maybe 6% of my portfolio. I have four policies, most of which by now are paying more in dividends that the premiums cost (e.g., they are self-funding).  Two are "paid up" and generate small annual dividends while still increasing in value.   Life insurance is not a great investment, but as a small part of a portfolio, it can be a nice adjunct.  At this stage in the game, these policies pay out about 2% per year in dividends, and increase about 4% each year in value.  Not bad - at this stage of the game - so I might as well keep them.  However, this is after decades of negative growth, which is how life insurance works.

7.  Living Within Our Means:  This is not part of a portfolio, but it is the real key.  Spending 95 cents of every dollar you make, instead of spending $1.05 for every dollar, is the key.  And yet so many of us (including myself!) spent more than they made, for decades at a time, over the last few years.  Learning to live on less is very important, as  you will eventually have to retire and live on your savings.  And even if you can save a million dollars for retirement, chances are, that won't be but $50,000 a year income

Diversification, no debt, living within your means.  I think that is a better plan than a scheme.

What have I not invested in?  In short, anything that the television and the media says is a sure thing.  No Apple stock, no Facebook IPO, no Groupon, no ZipCar, no Zynga, no Gold!   I tend to look for things that I think are good deals, not the clamoring mass of humanity thinks are good deals.

That is why, when the clamoring mass of humanity said Real Estate was a sour deal, in 1995, I bought.   And when they all said it was the best thing in the world in 2005, I sold.   You can call than "Contrarian Investing" but that is just putting another label on common sense.   Anything heavily advertised or hyped is a bad deal by definition.   Good deals present themselves - they don't need a shouting guy or a talk show host to sell them.