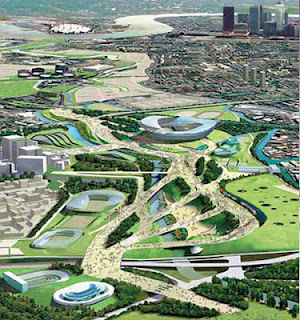 I won't be watching the Olympics this year, just as I did not watch them the last time around, or the time before that.  Why?  Because they are boring, irrelevant, and corrupt.  Let me explain.

1.  Games No One Plays:  Do you know anyone who got a free ride though college on a shot-put scholarship?  Didn't think so.   Olympic games are so esoteric and antiquated that commentators have to spend half the time explaining them to the audience.  And some of the "sports" are just bizarre.  In the Winter Olympics, they go cross-country skiing and then shoot at things.   What the fuck kind of "sport" is that, other than something practiced by Rocky Mountain Survivalists?

And don't get me started on things like Ski-Jumping and Bob-Sledding.  Who, other than Olympic Athletes, does these things?   No wonder the Jamaicans did as well as they did - it isn't really a real sport.  "Ya know, nothing beats a day of recreational Bob-Sledding, I always say!" - Actually no one says that.  Because no one DOES it.   It is just a made-up sport, because they needed more than "Skiing" on the roster.   What's next?  Snowmobiling?

2.  Corruption:  You recall the scandals in years past, where IOC members were bribed to steer the Olympics to certain countries and cities.  The Olympics is first and foremost about money, and lots of it.  Between the huge television contracts, the lucrative endorsement contracts for successful athletes, and the massive amounts of dough squandered by cities and countries to host these "games" the whole thing comes down to crass cash.

And the money to be made from the Olympics is staggering - from the construction contracts, to booting out your tenants and renting out your house.   Everyone, it seems, wants a slice of that Olympic booty.   And it is pretty sickening.

3.  Bombastic Fans and Reporting:  If there is an event where no one from the "Team USA" is coming in first, second, or third, it rarely is reported.   The US media always shows crowds of rowdy fans chanting "USA! USA!" like a bunch of jerks.   No wonder the rest of the world hates us.   Do the French all get together and shout "F! F! F!"  Of course not.  The Olympics is about competition and cooperation between countries, not a time for patriotic bombast.

But at least for our country, it is time for us, once again, to show ourselves off as self-centered jerks who don't give a rat's ass about anyone who wasn't lucky enough to be born here (which is apparently some sort of personal accomplishment).

4.  The Olympics Can Bankrupt the City:  Montreal is still reeling from its Olympics.  Many small countries spend Billions trying to build venues overnight - venues which become white elephants later on.  Taxpayers are stuck with the bill.   Only the largest cities, like Los Angeles, can swallow up an Olympics.   Smaller towns - and cities - often suffer.

And Greece, which hosted the 2004 Olympics, has been stuck with abandoned Olympic venues and hard-to-convert housing.  The debt load no doubt exacerbated the current Greek Debt crises.   Lake Placid, New York, being so isolated, proposed to convert its Olympic dorms into a prison, an option that was met with much political protest.

To be sure, the smarter countries and cities planned Post-Olympic uses for their venues carefully.  Larger cities with nearby Universities could make use of dorm rooms and Olympic venues.  Stadiums can be used by professional athletic teams, unless, of course, as in the case of Montreal, the team leaves.


5.  The Olympics are Homophobic:  The USOC was able to push through a special Trademark Law in the USA granting it exclusive rights to the word "Olympics" - even though the Trademark Office deemed the term generic.   Why did they do this?  To protect their lucrative marketing machine and ward off copy-cats?   Uh, no.  They did it because a few people got together one year and started a "Gay Olympics" and we couldn't have any of that!    After all, an event started in Ancient Greece couldn't have anything to do with Homosexuality (Frankly, I think they created the games, just so the fellows from Sparta could get a piece of Strange).   The USOC didn't go after anyone else - we still have a "Special Olympics" - just not a "Fabulous" Olympics.

But again, it illustrates how "The Olympics" has morphed into the International Money and Marketing Machine, which has more to do with making a few people rich, than in putting on an actual Olympic event - which should not require a lot of hoopla and payola.

6.  The Olympics are Expensive:   If you want to travel to the Olympics, find a place to stay, and buy tickets to the events, well good luck.   Because there are enough nutjobs out there who will pay stratospheric prices to see these events - and enough greedy landlords who will jack rates through the roof, to make it difficult, if not impossible, to go see them.

So, if you want to go, bring thousands and thousands of dollars, so you can see people do the pole vault and shot put.   I am sure you will find it highly worthwhile.

7.  The Olympics are Political:   Despite its origins as a non-political event, designed to draw people of all races, cultures, and countries together, the Olympics has been marred by politics, again and again.  In 1980, we boycotted the Summer Olympics in Moscow, because (now wait for this, it is precious) the Soviets invaded Afghanistan.   Doya think the Russians will boycott us this year?

But over the years, people have tried to use the Olympics as a platform for political statements, nationalistic programs, protests, intrigues, and even violence.

In point of fact, the modern Olympic era has been marked more by politics than anything else.   Even the vying for medals is totaled up, Nation by Nation, in an attempt to "prove" the superiority of one country over the other.   The era of friendly competition is over - if it ever existed.

9.  The Olympics are BORING:   It goes on for weeks, and most of the events are little-attended, until the finals.   Broadcasters realize this, and attempt to splice together highlights of events, which further strips them of context.   Since they are held in another time zone, you either have to stay up until the wee hours of the morning to watch them, or see an excerpted "highlighted" version the next day, after you've already read who won, in the morning's newspaper.

And of course, since the network who is broadcasting them paid Billions of dollars for the rights to broadcast them, you can be sure that a few minutes of Olympic gymnastics will be interrupted by five minutes of blaring ads for SUVs and McDonald's happy meals.


So, you'll pardon me if I say "who gives a fuck?" about the Olympics.   I am not going to sign up for Cable Tee Vee so I can see someone I have never heard of, play a sport I have never heard of, and then root for my country while wearing a red, white, and blue t-shirt.  That sort of thing is faux patriotism at its worst.

And to do this, while lining the pockets of our Corporate Overlords, seems, well, sort of against my own best interests.   Feigning interest in the Olympics is just not for me, thanks.
Newer Post Older Post Home