Dying with Dignity (The Cost of Health Care) 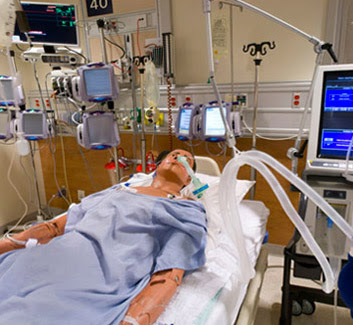 
The great American Way of Death is pretty sickening - and expensive.   According to some sources, about 20% of Americans spend their last days in the Intensive Care Unit, racking up bills of $10,000 a day or more.   It is an unpleasant way to go - and an unnecessarily expensive one - accounting for about one-third of our Medicare budget.

Why do hospitals do this?   Or moreover, why do some Doctors do this?   Well, in some regards, it can't be helped.   We often don't know in advance if someone is going to die.   A neighbor goes to the hospital, after a bout with lung cancer, and suffers a serious lung infection - pneumonia - and it looks pretty grim.

Three months (and hundreds of thousands of dollars later) he is out mowing his lawn, spry as ever.   It could have worked out differently, of course.   That's the way it works in hospitals, sometimes, where secondary infections kill off an otherwise healthy patient.

But in other instances, it would seem that some doctors may be over-prescribing care for patients who would be best served by Hospice, not the ICU.   And often, unnecessary surgical or other procedures are suggested or recommended, only because the patient has the ability to pay - often in the form of medicare.

I mentioned before how I switched dentists, after my fancy dentist recommended over $10,000 in procedures, including breaking my jaw to "correct my bite" (that has served me well for 50 some-odd years).    When I balked at the cost, she said, "No problem, your insurance will cover it!"

When I explained that I had no dental insurance (like most Americans) she shrugged, "Well, it really wasn't necessary, anyway".

And some dentists do this - drill out teeth that are perfectly healthy, or re-drilling perfectly good fillings, like they are drilling for oil.   And some odious chain-denistry stores do nothing but this, offering "free checkups" as a means of luring people in for a strong-arm sales pitch for a number of services - most of which are bogus or unneeded.

The doctoring business is no different.   And there are some doctors out there who prescribe services that are personally profitable to them, even if they are not strictly necessary to the patient.   Some do this directly to make money, others, well, as the old saying goes, "if the only tool you have is a hammer, every problem looks like a nail."

So the knife doctor will recommend cutting.   The pill doctor has a 'script for you.  And the doctor with the radiation machine - guess what he prescribes?

And of course, the doctor who owns a slice of an imaging center will surely recommend an MRI or Cat Scan.

Warren Buffet made headlines the other day, when he was diagnosed with Stage 1 prostate cancer.   Some analysts jumped to the conclusion that Buffet was dying, and that Berkshire-Hathaway had better find a successor - quickly!

However, prostate cancer is a very common thing among older men.   If you live long enough, you will get it - and you may already have it and go to your grave with it, dying from other causes, and never know it.   It is slow-growing, and oftentimes the best treatment is, well, no treatment.

And at age 81, Buffet is more likely to die of other causes, long before the prostate cancer is a real threat to him.   In other words, the best treatment may be no treatment at all.

Removing the prostate can result in impotence and incontinence, as well as a host of post-surgical problems, such as infections (one friend of ours has a permanent bladder infection as a result of this surgery, that cannot seem to be cured.   It has made his life miserable).

Some argue that as many as 80% of these surgeries are unnecessary.   So why do they do them?   Because Medicare Pays, that's why.   You may have only a decade or two left to live, but without your prostate, those last two decades will be as an incontinent old man, with a severely reduced quality of life.   And all for what?   The premise that you will live forever, "but for...."?

Even in clearly terminal patients, oftentimes unnecessary treatment is prescribed.   A good friend of mine was diagnosed with an aggressive form of pancreatic cancer (which is just about all the forms of pancreatic cancer).   Prognosis?   A few months to live, if that.

He was a  robust guy who lived large and loved to spend time partying and out on his boat.   So how did his life end?   In a harrowing two months of chemotherapy and radiation, watching his hair fall out and retching into toilets.   Living in hospitals and laying on stainless steel tables and staring up at fluorescent lights, as chemicals were pumped in to his body and tubes were inserted everywhere.  Did this extend his life?   Arguably it shortened it.   And it made those last two months misery.

Why did he do it?  A doctor recommended it.   Yes, there is a small - very small - chance of cure.   And recently, there has been more success in treating pancreatic cancer.   But in his instance, the cancer was so advanced that the doctor should have told him to go home.

But that doesn't generate a lot of billing for the hospital, does it?

Why do doctors do this?  Why do patients do this?    Well, doctors are people just like us, and as scared of death and dying as anyone else - even if they see it more on a daily basis.   Perhaps this makes them more scared of it.   And as a result, I think, they have a harder time telling patients - and their families - the unvarnished truth.

And patients?  Many believe that a medical degree and a white lab coat make you into a God - and that anything a doctor says is, well, the final authority in the matter.   The reality of course is, that a doctor can only do the best he can, and often he doesn't know with certainty if a particular treatment will work or not.

My late Sister struggled with breast cancer for nearly two decades.   Towards the end, it was clear that her life was about to end - the cancer had metastasized to nearly every organ in her body, including her liver.   You can't live without a liver.

A week before she died, I went to visit her, and the whole family was there.   I asked the doctor what the prognosis was.   And it was an interesting thing - he waffled.   And moreover, he told different family members different things, thinking it would be a "kindness" to "give them hope" instead of just flat-out saying she had only days to live.

We left the hospital with some family members saying, "The doctor told me she could go home soon, and then perhaps get into rehabilitation therapy!   There might still be a chance for her!"

This was cruelty of the first order, in my book.   But it was an interesting thing - they did send her home, and into Hospice care, the day she hit the lifetime cap on her health insurance policy.   In other words, they had wrung out all the money they could, and only then did they admit the obvious, which was that the best thing you can do for a dying person is to make them comfortable and allow them to die with dignity.

Medicare is one of the big problems in this area.   Living here on retirement island, it is interesting to see how many surgical procedures people have - once they reach age 65.   Suddenly, those cataract problems with the eyes can be fixed - because medicare pays for it.   And various ailments that have been bothering you for years, but never fixed, are now operated upon.

I mentioned before how taking Avelox caused one of my biceps to partially detach.   I was told by my doctor that generally they don't operate to repair that (with my insurance, anyway).   But a friend of mine - on medicare - said, "Oh, heck, they can fix that!  I had it done last year!"   Medicare pays.

In a way, our medical care system has devolved into that nightmare in the Sci-Fi movie The Matrix, where people are kept alive in pods, so they can be milked for their energy.   Only in this case, the energy is the medicare or insurance dollars.   Health care is expensive in this country, only because it is wildly profitable.   And if a hospital is to offset the cost of treating indigent patients, it needs to fill those hospital beds.

Again another a contrast with medicare and non-medicare treatments:  I have a diverticulitis attack, I am given Avelox and told to go home.   My neighbor, who is over 65, is given a hospital bed for three days.  Why?  They had empty beds to fill (I visited her, and there were several in the ward) so she gets a private room.    Why?   Medicare Pays.

So, when it comes to dying, the treatments prescribed are often based on the ability to pay - and since medicare pays - and pays well - it pays for a doctor or a hospital to prescribe treatment, even to a terminal patient.

I am not sure of the way around this.   My neighbor down the street was lucky.  One day she said she wasn't feeling well and would lay down on the couch and take a nap.  She woke up dead.   A neat, painless way to go, just go to sleep and be done with it.

The rest of us might not be so lucky - and we often don't have a choice in this matter.  And even when confronted with a choice, it is hard to know how we would react.   My friend who had pancreatic cancer, for example, I thought would go into hospice care, or ride his center-console out into the sunset.   But it is easy to make that call when you are in the land of the living, and not one foot in the grave.  It is easy to make brave pronouncements, until it is your life on the line.

And when that happens, well, you might just grab at whatever life-ring is tossed your way.   And if a well-meaning doctor (or an evil one, hoping to cash in) suggests a radical therapy with little hope of success, you may just grab that life-ring.  And who knows?  You might even be saved.