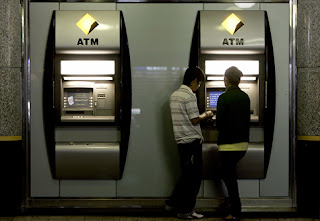 Some Banks are going to a new system whereby you get your card back before your start your transaction.   If you don't hit "DONE" when you are finished, the next person coming to the ATM can take up to $700 out of your account.  Fun.
I hate to rag on Bank of America some more, but they really are starting to get on my nerves.

The other day, I went to a drive-up ATM to deposit a check (how quaint, checks, I know, but it allows my clients to "play the float" for a week, so they still write them).  The lady ahead of me was in a hurry and she drove off.   When I pulled up, the ATM said, "Do you want another transaction?" and when I hit "NO" it gave me her ATM card.

I tried to chase her down on foot, but she drove off like her car was on fire (which is typical driving technique around here).  So I went into the bank and gave the card to a teller.  I'm a nice guy.  I could have stolen money from her account.   But then again, I probably would have gotten caught.   And anyway, would I want someone to do that to me?

Apparently, this happens a lot, so Bank of America decided to reprogram the ATMs so that you put your card in first, then it is returned to you.   THEN you enter your PIN and do your transactions.   I guess the thought was, no one will forget their ATM card this way.

The problem is, of course, that when you are done with your transactions, the machine is still logged in under your account.   If you take your receipt and walk away, without hitting "DONE" you leave yourself open to theft.

A thief - or even the next person in line, could  just hit "NEW TRANSACTION" and then "WITHDRAWAL" and then "$700" and take that amount of money out of your account.   Would the bank cover this?   Hard to say.   After all, you did leave the darn thing wide open!    But even if they did, this money would likely take days to be reimbursed, and in the interim, you would be socked with bounce fees.

The problem with this "solution" to the card problem is that it requires that you re-program your brain.   If you have been using an ATM for a couple of decades, you might get into a pattern of habit that is hard to break.

And yes, this happened to me, when I made a deposit at the ATM today.   And the nice girl in line behind me said, "You didn't hit DONE!"  which was very nice - and honest of her.  So I went back and hit it.

But it made me realize the vulnerability here.   When there is a line at the ATM, you feel rushed, and thus when that receipt pops out, your mind says "DONE" even if you are still logged in.

Of course, the actual physical use of cards will, in a few years, sound quaint.  I am sure by then, with RFID tagging technology and smart phones, you will just wave your phone in front of the ATM and get cash, and as soon as you are out of range, it will log you out automatically.   But perhaps by then, making "deposits" and "withdrawals" will be as archaic as the magnetically-encoded card.
Newer Post Older Post Home