How Do You Win at a Game That is Rigged? 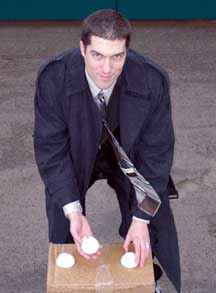 You can't win at a game like this.  So don't play.
In the last few posts, I've explored some ideas rolling around in my mind about investing.  A lot of people are coming to the conclusion that the whole Wall Street thing is rigged, and to some extent, they are right.  So how can you win at a game that is rigged?

For the average middle-class American, the money you have in retirement will largely be the money you contribute to your 401(k).   Saving money is more important than investing money.  And yet the media promotes the latter.

A lot of "little people" gamble smalls sums of money on hyped stocks, only to lose their shirt.   These are the people that Morgan Stanley and Mark Zuckerberg were hoping to fleece with the Facebook IPO.  And they did get fleeced, even if the stock is tumbling.  Because the folks who are paying even $32 a share today, are paying about $32 a share more than the founders paid for their shares.  Despite the lack of big first-day gains, this is still a winner for Facebook.

But the point is, you can't trust even the mainstream media anymore, to report impartially on investments.  MSNBC was the worst at hyping Facebook, and only at the end, did they disclose they had a quarter-billion invested in the place - which no doubt would be worth billions once the IPO dropped.

MSNBC did well.  You did not.

As this article about Jonathan Ledbed illustrates, the idea of hyping a stock, running up the price, and then selling out, while still technically illegal, is widely practiced.   Companies hire "Shareholder Relations Managers" who then groom the company's image online, in order to prop up the share price.  As the article notes, these folks did little more than teenager Jonathan Ledbed did, in pumping up penny stock prices.  And of course, there are the legions of investment advisers on television and online, each touting a stock, even if the recommendation makes no sense whatsoever.

In either case, it requires someone on the other end of the deal - a small investor, greedy to "make it big in stocks" who will spend money on this stuff.   And they feel, like the guy who bought $500 of Facebook stock, "What the heck, it's only $500, right?"  So they buy stuff they don't know anything about, other than what they hear about on a website, and they get creamed.  And this is the person that stock traders make a lot of money from - people who don't know what they are doing, but investing small amounts and basically gambling.

And people fall for this - and are raging true-believers.   They get burned on one stock, but rather than learning from the hot stove, they go back - sure that "this time" they will win.   They buy gold, too.

So winning at the savings game is as simple as saving, not investing.   Stop trying to get fabulously wealthy with small, speculative investments, and instead, invest in a panoply of sound investments, that over time, will hold their value.

You might not get Donald-Trump rich (which is fake, anyway, he just plays a rich guy on television) but you might get Retired New York State School Teacher comfortable - and that is mighty comfortable, let me tell you!

Just turn off and ignore all the financial channels - all of television in fact.  And when you hear of a stock being hyped, just run away from it, as it likely is a bad bet.   No one sells the goose that lays the golden eggs.  No one hands out "stock tips" either.   If you know a stock is going to go up in value, you BUY IT, you don't tell people about it.

Unless of course, like MSNBC, you already own it, and want others to drive up the price.

The law of supply and demand drives prices wildly.  Most people simply don't get this.  A tiny shift of 1% in the demand for housing can drive prices up 10% or more.   A tiny increase in the demand for gold can double the price overnight.

But similarly, tiny losses in demand - or increases in supply - can cause huge drops in prices, as we have seen in the past, and will see again.

Housing prices in some areas of the country dropped by 50% or more in the last few years.  This does not mean the demand for housing dropped 50% - only that if there was even one or two more houses for sale than there were buyers, a price-war erupts.

So, trying to time the market, or make your money by investing is a very hard thing to do, unless you are willing to cheat at it, and become one of the pump-and-dumpers.

A better idea is to concentrate on saving and living on your current income, rather than borrowing your way to success (as so many Americans do).  It may not be sexy, it may not be wildly profitable, but it is the 100% sure way to "win" at this game.
Newer Post Older Post Home