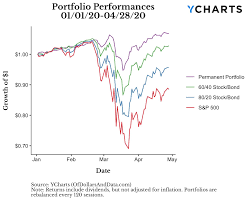 Wow, this "Permanent Portfolio" strategy really out-performs stocks!   But of course, who puts all their money into stocks? (Of course, this chart is only for four months!  Many other charts online show this portfolio far trailing stocks over time, probably due to the cash and gold content).


What is a "Permanent Portfolio" strategy?

Over the last 10 years, the "permanent portfolio" strategy made popular by libertarian investor Harry Browne several decades ago has had quite a heyday, earning insane amounts more than any U.S. stock market index.

The goal of the strategy was to essentially give the investor the ability to mess with his or her portfolio once per year, and then ignore it from that point onward. The idea was that a portfolio that has certain assets would be able to survive just about anything.

Although a little arbitrary, Browne decided to keep the portfolio incredibly simple and made it 25% stocks, 25% cash, 25% bonds, and 25% gold.

Does this strategy make sense?  Yes, sort of.  But frankly, I don't think it goes far enough.  And really, it is just two basic investment strategies - diversification and buy-and-hold, combined together and given a catchy name.   And catchy names, things hyped on the television, and "money-making systems" are usually gambits used by people looking to take your money.   If you want to invest this way, just invest.  But don't pay someone to do this for you.

Basically, what he has done is divide his portfolio into four groups and invested them in diverse assets (cash, stocks, bonds, gold).

Diversification is good, however, he is arbitrarily choosing only four investments, of which three traditionally have very low rates of return.  The run-up in gold prices has made him look like a genius.   But again, never confuse being struck by lighting with genius.  We all get lucky, that doesn't make us smart.

And when someone shows you a backward-looking chart of how much money you could have made if you had invested a certain way in the past, be wary.  Why?  Because investing via time machine is really an act of self-deception.   While you are at it, go back 10 years and buy all those winning lottery tickets.  It is easy to draw a chart showing stellar returns based on what could have been (as one Permanent Portfolio advocate does).   The problem with that approach is that you can tweak your criteria until you come up with a really nifty looking chart!

The second part of the strategy is to monkey with the investment only once a year - not tweak and trade and churn your account all the time, based on the news of the day.  In other words, buy-and-hold.   And this is what most of us do with our 401(k) plans, as they often only have limited windows to change the investment mix.  And it is what most sound investors do - buy-and-hold, not swap-and-trade.

This is also a sound strategy.  Trying to "time the market" usually results in catastrophe.   Should you sell it all now because of the Greek Debt crises?   Or should you have sold three weeks ago?   Or just hang on, bite the bullet, and stop trying to follow the Dow on a daily basis?

History suggests the latter approach is the best.  Yes, you COULD make a lot of money if you could time the market perfectly, but on the other hand, you could also lose it all.

In February 2009, a lot of people panicked and sold their stocks, effectively locking in their losses.   They thought they were timing the market - selling out before it got worse.  It didn't - the market roared back and recouped its losses.   Those that sold, cut their portfolios in half.

So yes, both aspects are sound strategies, but I think locking yourself into a rigid strategy of only four investments, is not very smart.

For example, putting 25% in Gold right now would just sit there and not gain in value much.  In fact, I suspect we will see Gold decline, as the law of SUPPLY and DEMAND kicks in.   Every day, they dig more out of the ground.  Every day, someone else sells some old ring or watch to the jewelery store.  Once the supply increases to satisfy demand, prices will drop - dramatically, just like the housing bubble.  And if demand drops, which it will, once people stop investing based on FEAR, well, we could see a precipitous decline.

And gold is all about investing based on FEAR - which is the worst way to invest.  (Gold seems to have hit a wall as of late, peaking at nearly $1900 an ounce, and then falling to about $1600 since last October.  Depending on what time range you choose, you can show Gold trouncing the stock market, or vice-versa.  Since February 2009, it has hardly done better than the market, and this is not taking into account dividends, which Gold never pays).

The stellar rate of return touted by folks is in comparing this strategy to a 100% stock investment strategy.  In other words, they are comparing diversification to NO DIVERSIFICATION WHATSOEVER.  If you  picked any one of the four elements and compared it to the diversified portfolio, the diversified portfolio wins - particularly when you pick the start and stop points, retroactively:

He believed this portfolio would be optimal through what he considered all possible market conditions: prosperity, inflation, deflation, and recession.

OK, so we see that Mr. Rowland, who apparently has a working time machine, went back into time and hypothetically re-invested his money.  The result?  A stunning 0.5% increase in the rate of return.   Pretty much what one would expect if you diversified your portfolio.  Is this the "insane amount" of earnings that the first author was talking about?  9.7%?  Insane!

But also note, that Mr. Rowland, in his backward-looking hypothetical, conveniently stops the comparison at the bottom of the market crash - in 2008.  That is sort of like "Disco Stu's" projection of the sale of disco records - whose data chart ends in 1976, but projections climb ever upward.   Picking starting and ending points conveniently can make any strategy look better than it is.  This is why, back in the 1990's, the Motley Fool would always talk about long-term stock-market gains, starting from 1930 onward.  Picking a good starting date - and ending date - is the key.


If his comparison went through to say, the spring of 2011, it might show that 100% stocks are better.  Or, if you use the "last decade" approach in the graph at the top of the page, you can show that the "Permanent Portfolio" smacks down the Dow like a wife-beater in a trailer park.   It all depends on the time-frames you selectively choose.   This is not to say the strategy is flawed, only that you should beware when someone tries to "sell" you an investment strategy, based on arbitrary stop and start dates, while using retroactive data to project into the future.

Like I said, diversification is a good idea.  But there other investments out there that are good ways of diversifying, which you might want to consider as well.

And note, the idea that you will "get rich" based on an investment STRATEGY is flawed.  About half the money you end up with, in retirement, is the money you contributed to that account.  Compound interest is a powerful thing!  But we put in little at age 20, and more at age 50.  Those latter dollars don't grow by much.  People who end up with a lot of money are people who saved a lot of money to begin with.  Investment strategy is less relevant that merely choosing to invest.

Trying to play "catch-up" with risky investments is usually a bad idea.  But a lot of people are trying to do this, these days, doubling-down their bets by taking what little they have saved and putting it into things like Gold, Facebook Stock, and other purely speculative investments.   You'd have better luck at a Casino.

NOTE ALSO that your allocation of assets should get more and more conservative as you get older.  By age 75, you should not have much in risky stocks or even gold, but rather have most of your portfolio in guaranteed rate-of-return, government insured investments.   And please, don't tell me that the government is going to go bankrupt and we all will have to eat gold.   Ain't happening.  Betting on the end-of-the-world is a sucker's bet.

Anyway, here are some other things that you can also diversify into.  The four he has chosen are not bad, but limiting yourself to only four seems somewhat arbitrary to me.

1.  It goes without saying that paying down or paying off debt is a good investment - you have to anyway, eventually.  Investing in the stock market, gold, or other speculative investments, while accumulating debt, is a very bad idea.   Before you "invest" make sure you are also paying down debt, not accumulating it.  Investments go sour, but debts are forever - if not paid off.  We saw this in 2009, when people invested everything in stocks, while borrowing more and more against their homes.  The housing prices tanked and the stocks tanked, leaving otherwise solvent people, insolvent.  The "idiot" who paid off (or paid down) his mortgage, on the other hand, had a place to live - and a positive net worth.   Before you invest, have a plan to pay off debts!  If your debt load is increasing as you are investing, then you are borrowing money to invest - leveraging yourself - which is always a bad idea, unless you can guarantee stellar rates of return.  You can't.

2.  Real Estate remains a sound investment, and will start to be a real bargain in the next year or two.  Again, I made a million dollars buying foreclosures and renting them out.  And then I sold out when the idiots bought in (as they are doing now, with gold).  Owning your own home is a good first step - you need a place to live, and houses, if bought in a reasonable market, hold their value.  Not having a mortgage saves me at least $20,000 a year in interest payments.   That is a pretty hefty rate of return, if you think about it = 6.6% and pretty safe harbor.  Investment properties, if they have a positive cash-flow can be self-funding money-makers, if you are astute and handy.

3. Insurance and annuities are another area to park money, but I would not put too much into these.  They are a negative rate of return for many years, but once they are paid-up, are nice little cash machines.  I have about $100,000 cash value in life insurance, that pays me about $1500 a year in dividends and increased in cash value by twice that every year.

4.  In addition to government bonds (which are not paying squat these days) there are also corporate bonds, which, while riskier, are paying pretty good rates of return.   And oddly enough, corporate bonds can be less risky than stocks.  If a company goes bankrupt, it is the bondholders who end up owning the place.  The stockholders are wiped out.

Of course, there are other investments out there - but they can be a lot riskier for the small investor.  The point is, with your own money, you can't afford to lose it all, and investing all of it on any one thing is a really bad idea.   Churning your account is an even worse idea.

So yes, this "Permanent Portfolio" thing sort of makes sense, on the one hand, but is just a trendy phrase on the other.  The guy who created it was just stating the obvious - or what was obvious to any real investor - diversify your portfolio, and invest for the long haul.  But I am not sure that 1/4 in Gold is a good idea, for the short-term, or the long haul.   Folk who "invest" in gold, usually end up getting burned, unless they have a working time-machine.
Newer Post Older Post Home