Is eBay dying for the small seller? 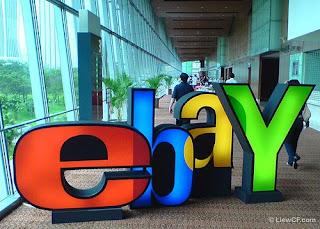 eBay used to be a place where you could buy and SELL items.  Today, it is more like an online store.

The beauty of the Internet is - or was - that it was interactive.  In the early days, before the big media companies stepped in, and the big corporations started taking over, anyone - even a schmuck with a computer and a URL, was on an equal playing field with everyone else.   You could compete with large corporations and media outlets.

And that is one reason, I think, AOL failed.  They tried to take the Internet and make it a branded media empire - and people resisted.   It was not that it was a bad idea, only that they were ahead of their time and charged a monthly fee.   If they had called it "Facebook" it might have worked, at least today.

But the most basic things on the Internet are getting harder and harder to do.   The raw data from real people is being shouted down by professional Trolls, who post angry messages, bait people, or make false laudatory reviews.

And the most basic thing you can do - dispose of your chattels - is harder than ever to do on the Internet.  Sure, you can use Craigslist to sell things locally - and have you had shouted down by paid commercial advertisers.  And of course, there is enough fraud on the Internet to discourage anyone from selling their car there - they want to keep just enough scare stories out there, so you trade-in, rather than sell.  And it works.

Recently, I tried to sell some things on eBay.   I had a wine opener stand that I thought I could get ten bucks for.   But when I went to list it on eBay, well, the shipping would be at least $12, parcel post or UPS.

I went online to see what they sell for, on Amazon and Wine Enthusiast, and they want $22 for the item, plus $5.80 shipping by UPS.   How the heck do they ship so cheaply?   I have to pay at least twice that much!

So, if I want to sell the item at a competitive cost, I have to list it for $10 or less, and then pay eBay a few dollars in a "final value fee."  And these seller fees have escalated rapidly in the last few years.  Perhaps this is because eBay is getting less and less business, compared to say, Amazon?  Whatever the reason, the costs of selling online are pretty steep, and the amount you realize is pretty small.

Guess what?  Ain't worth it.  You can hope to sell it on Craigslist, or at a garage sale, but that's about it.   Selling small, inexpensive items on eBay is just not practical anymore  - not when the big competition sells for the same price and gets a deal on shipping.

This is not a complaint - just a statement of reality.   And I find myself selling fewer and fewer items on eBay these days.   The last few items I sold garnered pitiful amounts of money, particularly after paying shipping costs and eBay fees.  Not worth the time it took to list the items, frankly.

Of course, this just reinforces in my mind that buying things, in general, sucks.   You buy something, and you have to dispose of it, down the road.   Otherwise, your house fills up with clutter.   And since it is so hard to sell things, well, you end up tossing a lot of junk away.