Keurig Coffee and the Subscription Model 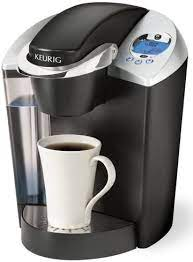 Does coffee-in-a-cartridge make any financial sense?


Green Mountain Coffee recently made news, when it reported lower-than-expected earnings.  When the stock price subsequently tumbled, some of the officers got into hot water when their margin calls triggered insider sales of stock, and they ended up losing their jobs.

But the problem the company is having goes beyond mere financial misdoings. The use of the subscription model to sell coffee may have backfired.

Green Mountain owns Keurig, a division that sells coffee in cartridges that fit into special makers.  The coffee makers are not cheap - a reconditioned model at Big Lots is offered for $99 apiece.  The fact that Big Lots has a $3 Million inventory (according to one recent newspaper ad) of these "reconditioned" (returned) models should tell you something about how consumers like them.   They don't.

(Of course, if you are the Motley Fool, you spin this into a positive thing - after all, if they are for sale at Big Lots, they must be popular! Of course, taking financial advice from guys in clown suits, is problematic.  And what did ever happen to the "great sell-off of 2011?"  We were supposed to lose $3 Trillion dollars, but ended up breaking even!)

For a commercial setting, the system makes sense.  I went to a conference that had a commercial version of this machine, and it makes good, hot coffee, instantly, with little fuss and muss, and without labor and endless pots of cooling coffee (or urns) that has to be thrown out once cold.  It actually saves labor and coffee - and thus money - in that kind of environment - and eliminates a messy cleanup as well.

(For an office environment, however, I suspect that the convenience of the device would encourage consumption and radically escalate costs.  Office workers stop drinking coffee in the afternoon, once the coffee gets stale and cold and the maker is cleaned out.  But with the cartridge, everyone can have "another cup" on a whim, only to cool on their desk, undrinken.  I saw this effect in my own office, when I offered my associates free bottled water, sodas, and juices.  The result was a lot of 3/4 full bottled water, soda, and juices we ended up throwing away at the end of the day.   I put a stop to that very shortly.)

For home use, it may be convenient, but it easily doubles the cost of making coffee.   They counter, of course, that it can be used to make specialty drinks (candy coffee) or tea.  But the staggering cost involved makes this impractical for home use.  Hence Big Lots has $3 Million of "reconditioned" Keurig makers to sell for $99 each.  You can only imagine what the retail price was, orginally

And by the way, $99 is a lot of money for a coffee-maker.   And coffee, made at home, costs about 25 cents a cup, while tea costs about 5 cents.  Keurig cartridges, even when bought in "bulk" packs of 48, cost anywhere from 50 cents to a dollar-a-cup, putting them within range of restaurant coffee.

Is doubling the price of a commodity justify the "convenience"?   The reduced earnings at Green Mountain and the tumble in stock price would seem to indicate "No."

And the reason is, I believe, subscription fatigue.   Simply stated, Green Mountain is trying to follow the lead of Hewlett-Packard (another company using the subscription model, that is also in financial trouble) in trying to fleece customers by selling "cartridges" which can only be bought from one source - or a limited number of sources.

Not only that, the cost of the cartridges makes the product more expensive.   As a result, consumers start to feel more than a little put-upon when it comes to these things.   And they start looking for less expensive alternatives - or learn to do without.   As I noted in The Death of Paper, people are learning to just "do without" printing - displaying photos on their computers, smart phones, or pads, rather than printing them out and putting them in albums.

Consumers are a little smarter than these marketers think.   And after you've gone to Staples for the umpteenth time to buy printer cartridges, you start to feel had - and realize you are paying an exorbitant cost for something that should be cheap.

And I suspect that is why these coffee makers get returned - a lot.  After paying $200 for a coffee maker, you then have to plunk down a buck every time you want a cup.   This could escalate your coffee expenses to $1000 a year, if a couple drinks 1-2 cups of coffee a day.

And like with most Subscription Model enterprises, the daily cost seems trivial, but over time, it adds up to a staggering number.    These are little holes in your rowboat, that, while they won't sink you right away, will fill your bilge with water over time.   Punch enough of these in your financial rowboat, and you sink.   Doing this for no appreciable reason, other than to have a fancy coffee maker, makes no sense at all.

Green Mountain's financial woes may just be beginning.   They are trying to do a joint venture with Starbucks, who is releasing its own single-serve coffee maker later this year.  And the Patents that protect the Keurig technology (if you can call it that) are set to expire this year, which could potentially cut into their subscription model, unless they can figure out a way to embed a chip in the coffee cartridges, the way H-P does with their ink cartridges (the chip contains copyrighted material, and interfaces with the printer to insure that only H-P cartridges - and not refills or 3rd party cartridges - are used.   And Copyrights last, well, a very long time).

But from a personal standpoint, voluntarily tying yourself down to a technology like this makes very little sense.   It can double your coffee costs, which over a period of a year, could be as much as $500.   Over your career (45 years) a whopping $152,875.88 missing from your retirement plan.

And for what?  So you don't have to grind beans and change filters?   If that is such a hassle, then do what I do - drink tea.    It is as little as two cents a cup, is easy to clean up (it comes in the original "cartridge" - the tea bag) and requires no special maker, other than a kettle.

What's next?   Buying gasoline for your car in special cartridges that are sold only in a dealer?   What idiot would subscribe to that?

UPDATE NOVEMBER 2014:  Keurig makes news again, when Green Mountain Coffee forecasts lower earnings and the stock drops 7%. Meanwhile Coca-Cola buys a 10% stake - perhaps the dampened enthusiasm for the stock is to allow the share price to drop so Coke can buy more?  Given that the last CEO left over an accounting scandal, anything is possible.

These machines are selling at Wal-Mart for about $100 each - or more.   Some folks are snatching them up.  Some folks are idiots - paying a hundred bucks for a coffee maker and then a buck-a-cup for coffee!  But there are folks around you who will pay that much for "convenience" and not think of the overall costs.

I think long-term the big problem is going to be competition from other "cartridge" coffee makers, and even today, you can buy generic cartridges that you can load your own coffee into (although that defeats the convenience issue, but illustrates that costs become an issue for users).
Newer Post Older Post Home