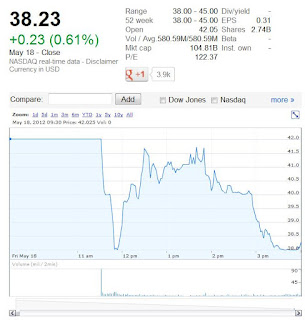 If you missed out on the Facebook IPO, don't fret, the price is still the same.

Well, the much-hyped Facebook IPO has come and gone.   And what happened?  Not a heck of a lot.   By the end of the day, Friday, the stock was, well, where it started at.  A few people foolishly bought at up to $42 a share, before it plummeted back to earth.

In fact, if you look at the volume of sales, you can see the price would go up, and then someone on the inside would then flood the market with shares, and then it would dump back to $38 a share.   Later in the day, the pump-and-dumpers seemed to catch on to this, releasing shares more slowly, to let the price rise back up again.   But by the end of the day, it seems interest had waned.

Monday will either bring greedy buyers, who want to get in on the "IPO Price!" or panic sellers, who want to get out before it goes lower - I can't decide which.  I was watching CNN at a hotel in Savannah this weekend, and they seemed to be still hyping the stock.   Again, the idiot media is no place to get sound information ("Coming up next, how opportunity cost should be taken into account in personal finances!" I turned it off after that).

But that is one reason I don't invest in crap like this - since my time machine broke, I have found it very hard to time the market.   And timing investments is NOT something you should do without a working time machine.

Now, note the fundamentals on this investment - a P/E ratio of 122.  Ouch.   The last time we saw this was, well, during the last "dot-com" bubble, which burst, and took out a lot of small investors, and even mutual fund owners who invested in "tech" mutual funds, hoping for high rates of return.

Is this an unreasonably high P/E ratio?  Well, yes it is.   The way some people look at it, the P/E ratio is an indication of how many years you would have to wait to make your initial investment back.   Thus, it will take 122 years, at this rate, for Facebook to have enough earnings to double your money.  That is a long time, considering a fairly conservative 5% investment would double in value in a paltry 15 years.

In other words, Facebook is earning a 0.6% rate of return, which is pretty sad, considering you can get more than that in an FDIC insured CD account, with zero risk.   Facebook is a risky stock, and the risk should be rewarded with great rates of return.  Or at least, that is how it usually is supposed to work.

Another way to look at this, is to compare it to other tech-sector stocks, such as Apple: 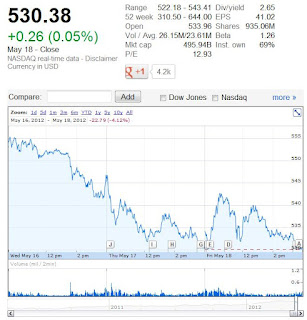 Apple has a P/E ratio of 12.93, which means it earns enough money in 12 years to equal your investment.
Apple, which has been showing some pretty amazing profits - at least in the short-term - has a fairly low P/E ratio of 12.93.   For Facebook to be as profitable as Apple, they would have to increase their earnings by a factor of ten.  Or in other words, my previous comments about Facebook stock being overpriced by a factor of five was conservative.   Facebook stock, to be on a par with Apple, would be worth about $3.80 or about 1/10th its current value.

A lot of Facebook investors are going to be crying in their soup when they figure this out.

And note that Apple's stock, while rising wildly in the last few months, has been hammered as of late.   A lot of people - myself included - are skeptical they can keep making huge monopoly profits, particularly as the Android platform has nearly twice the market share in cell phones, and will surely take a chunk of the pad market as well.  If you believe in the future of Apple, you believe that people will continue to pay $799 for an iPad (enough to buy two laptop computers) indefinitely, even in a market of $150 Android Pads.  People are foolish, but not that foolish.

So yea, I think Apple is overvalued - for the long-term.   If you bought it six months, a year, or two years ago, then you are doing fine.   But that train has left the station - never try to jump on at that point.  But even if overvalued, at least Apple has a rational P/E ratio and is returning $2.66 in dividends annually.

But, you say, what if Facebook can take this $16 Billion from the IPO and "invest" it in great new technologies and make lots more money?   Well, again, I am not sure what they could invest in that would grow profits by a factor of 10 or more.  Bear in mind, a growth factor of 10 would only make the stock a rational investment, not a  great one.

Personally, I am hearing more and more from people that they are using Facebook less, that it is no longer "cool" as it once was, and that moreover, no one clicks on the ads - which are mostly for come-ons, rip-offs and crap.

Facebook's ultimate challenge is that they have opened a nightclub in a trailer park.   Maybe giving away free beer to the kids is filling the place, but it ain't profitable.   And if you want to attract the velvet-rope crowd, who wants the trendy DJ's and the fancy cocktails - and who will pay a $20 cover charge, well, you have to move the club from the trailer park - and get people to forget it started in a trailer park.

"One trick of the tiny belly" and disturbing image hairy homeless man selling car insurance isn't going to cut it.   Already, GM has pulled the plug on their ads - noting correctly that having your car ad next to the "Obama wants Moms to Go Back to School!" ad is really bringing down your own brand.   People want aspirational brands, and advertising next to a payday loan place is not going to do that.

The other problem with Facebook is just saturation - it is everywhere and people are starting to feel more than a little put-upon and marketed-to.    Every business in the world says, "Follow us on Facebook!"   And let me ask you a question:  Do you?

Do you follow your favorite restaurant on Facebook?   I've tried to visit some of these Facebook Pages, but they are not really interesting.   Either they are too concentrated on a core group of consumers (the bar flies) to the point where I feel less inclined to visit the place, or the page is too vague and has no current information (like tonight's dinner special) to make "following" worthwhile.

And frankly, there are few businesses that I really need to want to "follow" anyway.   Being a corporate groupie is sort of, well, dumb.   Like I said before, you might wear a hat that says "CHEVY RULES!" on it, but the President of Chevrolet Division doesn't have a hat that says "MERLE RULES!".   You can be "fans" of them, they don't know you exist.  Why be a patsy for someone's marketing machine?

Also, while you can "follow" someone on Facebook, you can't buy their products through their Facebook page.  To do that, you have to go to their web page, or to Amazon.   Facebook is dropping the ball here, in terms of interactive marketing - considering how much people buy online these days.   If I "follow" a sneaker company on Facebook, it would make more sense if I could one-click "buy" a pair of sneakers, rather than merely "like" them.   And if Facebook got 5% of each sale, well....

But they ain't doing that.   All you can do is just "like" things.

So, unless they branch out into new areas - including things not related to Facebook at all (and not try to make them part of Facebook) - I am not sure how they can grow by a factor of 10.

And then there is the CEO - a 28-year-old who wears a hoodie.   Again, never confuse getting lucky with brilliance, and here is a prime example.   This fellow is no "genius of the Internet" anymore than the guy who started MySpace  - who subsequently nearly ran it into the ground.  And that is the problem right there - Hubris.   People become wildly successful and think their success is do to their genius, and not a lot of "right place, right time" kind of deals.   They then try to leverage their "genius" into other areas, and discover too late that being hit by lighting is not an actual skill.

But of course, most folks don't think logically.  They watch the television, four or five hours a day, and think what is on television is important, and moreover, true.   So if they see lots of television shows about something, they assume it is important - and true.   And in the short-term, you can steal a lot of money from people like this, by telling them something is valuable and getting them to buy it - gold or Facebook stock, or condos in Las Vegas.

But eventually, they realize they have been had, and they get all pissed off  - but at the wrong people.   They don't ask themselves whether they shouldn't have been such fools to buy snake oil.  And instead of getting mad at the snake oil salesman and tarring and feathering him, they get mad at the wrong person - Wall Street or the President - as if they had something to do with their missing money.

In a way, this Facebook thing is a good teaching example of how these deals go down.   Watch how it plays out, and learn from it.   Remember how much hype and hoopla surrounded this company and the IPO - and how it all played out in the end.   And watch it through to the end, and see the sad lessons it will teach - and it will teach them.

And then remember these lesson the next time this comes around - as it did only a few years ago in Real Estate, this year in Gold, and maybe a decade ago in "dot com".  The market is not to blame for these unstable investments, investors are, for looking without leaping.

And then take this lesson and apply it to other areas of your life.  Where else are people lying to you?  Who else is hyping bad bets, bad investments, and bad practices?   And if you look around you with this lesson in mind, you will see it everywhere, on every billboard promoting title pawn loans and rent-to-own furniture, and every TeeVee ad promoting payday loans.

They are lying to you.  Yes, that is bad.  But if you choose to believe them, then that is your problem.
Newer Post Older Post Home