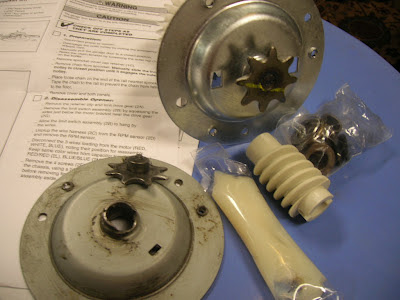 I recently repaired my garage door opener for about $25, which saved me about $110 over the cost of a new one.   How can you repair things like this, and is it worthwhile?  The Internet makes this a lot easier.

As I noted in another post, we recently insulated our garage door.   So it was a big surprise when the automatic opener ceased to work.   At first we were concerned that the weight of the insulation had somehow broken it.  But as it turns out, the main bushing on the sprocket shaft had worn out over the years, cutting through the sprocket case and eventually snapping the shaft, as shown in the photo above (old sprocket and housing on the left).

This took several years to do, and a few years back, I remember the chain falling off the sprocket and wondering why this was happening.  I adjusted the chain and it worked fine - for a while - but the main shaft kept wearing down, over time, until it broke.

I wrote down the model number and serial number and then went online.   While it is branded as a Sears Craftsman opener, it is made by Chamberlain and sold under a number of names.   But I thought I would try the Sears Parts Direct website first, as that is what came up when I typed in "Sears Parts 139.53615SR" into Google, the last bit being the Model Number.

The Sears Parts page had this diagram, which was helpful: 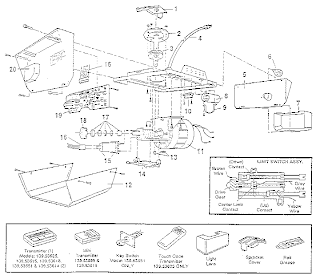 And under that, were a number of "repair kits" offered for sale, including this one: 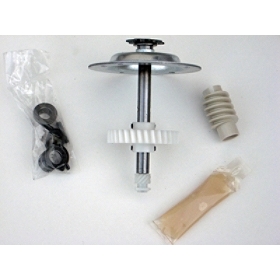 A nice little kit, with the main shaft, worm gear and main gear, chain sprocket, and even the housing that had been eaten through by the shaft!  They even give you new grease!  The bad news, Sears wants $47 plus shipping for this part number 41C4220A.

But, that gives us a new lead, and a new Google Search, and plugging the kit number into Google finds this kit on Amazon for as little as $27 and on eBay for $26 including express shipping.   Two days later, the kit arrives.

I read also online, some discussion groups about this repair, and how this is a typical failure mode for these openers.   The unit is actually well designed, as it allows you to replace the "guts" of the transmission, quickly and easily, basically renewing the whole unit.   And that is one point about most machinery - they usually fail in the same modes, and you will find that whatever broke your machine also broke someone else's - and information on the repair is available online.

In the meantime, I cleaned the unit, removing old grease and getting it ready for the new part.  The main spiral gear showed no signs of wear, so I left it in place.   The new shaft and housing merely slid into place and was held in with three screws.  Apply the supplied grease and you are ready to go.

Well, not quite.  I had to figure out which position was "UP" and "DOWN" on the opener and then attach the chain and adjust the tension in the proper position.   Then, it was a matter of adjusting the limit switches so the door would fully open and fully close.   Total time, about an hour.  Total savings, about $110.

Ten or twenty years ago, without the Internet, this would not be possible to do.  I would have had to spend hours on the phone trying to track down these parts, if I could get them at all (most parts places back then would sell only "to the trade" and not to retail customers).   I would have ended up replacing the whole thing, or calling a repairman to have it fixed - at considerable expense.

And this same technique - Googling part numbers or model numbers - can help you find the parts for a number of things, including cars, at a low cost.  Moreover, you can find helpful instructions online on how to fix something, because, chances are, if your sprocket shaft broke, someone else's did as well.   Again, most machine fail in common failure modes, and your experience is not unique - someone else had the same problem before you.

Using this online part number search technique, I have been able to repair computers (memory, display card, hard drive), cars (various parts), appliances, and the like.   The Internet is actually useful for things beyond updating your "Status" on Facebook or Twitter.

This is not to say you should attempt such a repair.   If you are not handy with tools and can't figure out basic mechanical systems, then all the instructions in the world will be of little help.    But if you are handy and can fix things, well, you can live better, on less, and save a lot at the same time!
Newer Post Older Post Home