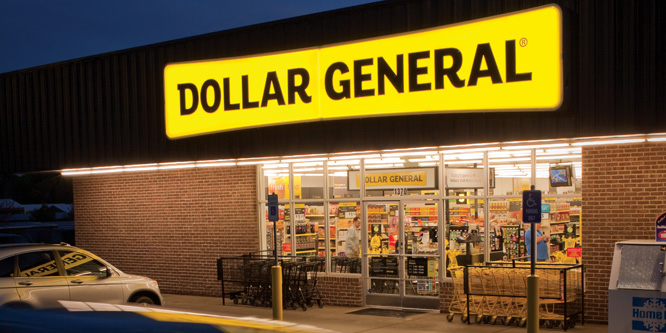 
In a previous posting, I mentioned that I checked out our local Dollar Store.   I was not overwhelmed with any "bargains" in there, but thought I would give it a try and see what the fuss was all about.

My skepticism about Dollar Stores is that they are usually located in depressed areas - either in the city or country - and are geared toward poor people.   The poor are offered the shittiest deals on the planet - and they bite on them, which is why they are poor.   So, it seemed to me that these Dollar Stores were going to be a bad bargain from the get-go, just by definition.   Any bargain aimed at the poor is usually a poor bargain.   That's another quotable quote!

Payday loans, pawn shops, buy-here-pay-here used cars, check cashing stores, title pawn loans, and rent-to-own furniture (or bling rim) stores all flourish in poor neighborhoods - and they are all horribly rotten bargains.    But even the "legitimate" businesses in poor neighborhoods are crappy bargains - overpriced goods, usually of a lesser quality.

In the ghetto, or impoverished rural areas, you see things like used tire stores, used appliance stores, lots of convenience stores, liquor stores with bars on the windows (selling everything in pints), and of course, fast-food restaurants.   These are not "scam" businesses, just bad bargains.   And I have written about most of these, before.  They are just poor bargains.

Down the street from the crappy liquor store, is a good liquor store, selling quality booze by the quart for what the ghetto store charges for a pint.   For the cost of two or three sets of used tires (including mounting) you can buy a new set that will last twice as long as the used sets, combined.  Used appliances can be a good bargain - if fairly new and bought from a neighbor.   But used appliance stores sell clapped out junk for not a lot less than the big-box store charges for new.  Convenience stores are convenient, but charge 3-5 times as much for basic grocery items.  And fast food?  Just overpriced poison.

One way to get ahead in life is to stop thinking poor and not patronizing these sorts of places.   And since most people have cars there is no need to patronize such places.  But many poor folks make poor choices, which makes them poor.   Getting ahead, for many people, means only to stop making poor choices - in both senses of the word.

So what about the Dollar Stores?   Well, to begin with, they are not all alike.   There are Dollar Stores, Family Dollars, Thrifty Dollar, Dollar General, and even stores that don't have the word "dollar" in them.  Some of them charge a dollar for everything, others do not.

The traditional "Dollar Store" owes its heritage to the old "Five and Dime" store, where everything was five or ten-cents.   And yes, we had these when I was a kid.   The name lives on in our lexicon, as in "dime-store novelty" or "cheap dime-store merchandise."

In a traditional Dollar Store, everything is a dollar.   Everything.   But of course, as inflation marches on, over time, this will be harder and harder to do, without cheapening everything too much - and explains why the "dime-stores" went bust.  Most of the stuff sold in Dollar Stores is made in China or India, but since labor costs are rising in those countries (as their standard of living rises) it is getting harder and harder to sell things at a dollar.   So, I expect that you will see Dollar Stores morph into "Two Dollar Stores" sometime soon, perhaps.

In these types of stores, since everything is a Dollar, they don't carry a lot of large merchandise.   If you want to buy laundry soap or dishwasher soap, it comes in a pretty small bottle.    And speaking of which, their soaps are a mixed bag.   Anti-bacterial hand soap and shower soap seem like a pretty good deal at a dollar-a-bottle (compared to $2.50 at the Grocery Store next door).   However, if you buy the jumbo-sized bottle of Berkley & Jensen anti-bacterial hand soap at BJ's Wholesale, it is about $1.50 a quart.  So there is no great savings there.

The laundry soap seems a little watered down, too.  And I received similar complaints about the bleach.  Frankly, I suspect that the packaging cost more than the contents, in any event.   With such small bottles, you have to buy lot of them, or go back every day.   The jumbo two-gallon container of Arm & Hammer laundry detergent, from the wholesale club is, I think, a better bet.

If you are traveling or camping and need a "travel size" thing of soap, however, the Dollar Store has your back.

Paper goods are not bad bargains, and I have bought napkins and paper towels there.  A standard sized roll of paper towels is a buck.   Next door, at the grocery, six rolls are $5.99.   This is a tie.  The wholesale club has 15 rolls for $14.50, which is a very slightly better deal.  The paper towel industry seems to like this buck-a-roll pricing, as it seems to be ubiquitous - and hard to beat.  No one, it seems, is selling paper towels at 50 cents a roll.

If you are having a party, they have a lot of "fun" party decorations and accessories, all for a buck each.   This month, they are running a Tiki theme.   But to buy all the stuff for the party, you could easily spend $20 to $40, buck pricing or not.

What about FOOD?   I was skeptical about this at first - buying food at a dollar store?  A sure recipe for salmonella, right?   I bought some pickles and olives, and they were OK - although you could bet for damn sure I made sure the lids "popped" when I opened them.   They were made in India, which is very weird to me (talk about not buying local!) and were, well, BLAND.   The Grocery store next door might charge more, but you can get a Kosher dill in a jar with a ton of minced garlic in the bottom.  Or olives stuffed with jalapeno peppers, cheese, onions, pimentos, or whatever.   The pitted olives in the dollar store were stuffed with nothing.  I guess the pimento is their profit margin.

Crackers seemed like a safe bet, and they were "OK" I guess, although one "flavored" version had a ton of artificial flavors on it.  For a buck, not bad.   But for 50 cents more, I would rather have Wal Mart "woven squares" crackers, which are their version of the Triscuit, which is actually better than the Triscuit but sometimes maddeningly hard to find at a Wal-Mart.  So, again, the Dollar Store does "OK" but provides no compelling reason to shop there.

Overall?  I'd say if you don't go to the Dollar Store, you ain't missing much.

Now, the other kind of "Dollar Stores" are these ones that just sell things at prices that are not a dollar.  And often, the prices are no bargains.   At a recent stop in Jacksonville Beach, we went to a really nice Thai restaurant in a strip-mall.  Next door was a "Dollar Whatever" or something, and we thought we would poke our head in.

We got in the door and saw that they were selling Barefoot Pino Grigio for $12 for the large bottle and $6.50 for the small one.  A friend of ours drinks this, so we stock it at our bar, and we know the price for it.   And twelve bucks a bottle is at least 50% higher than most other outlets.   No bargains here.

What was weird, was that the display for the wine had a big sign that said, "Check out these low prices!" when in fact the price was not low.   Again, the poor making poor choices.   You might assume that since it is a "Dollar Whatever" store that the prices are the lowest.   You would assume wrongly.

Wal-Mart is the same way - "Always the low price, except on the promotional items we hope you impulse purchase!"   If you go to Wal-Mart, bring a shopping list and stick to it.   The stuff in the centers and end caps of the aisles is usually not a very good bargain.   But many folks impulse-buy things and end up paying more than they should, as they just "Assume" that since it is Wal-Mart, it must be a good price.   Not always.


Speaking of impulse purchases, the Dollar Store I went to has a number of impulse items stacked on the end of the conveyor belt at checkout.   When you checkout, the clerk asks you if you want to add a candy bar, roll of paper towels, toilet paper, bleach, water, or whatever.   It is an interesting marketing ploy, and the girl running the register told me the management does it to "get the average ticket up".   They make money in volume sales, so if someone comes in and spends a dollar, they probably lose money just on the plastic bag and the cost of printing the receipt.

I also noticed that a lot of people do impulse shop there and just pick things at random off the shelves.  It is tempting.  Say, a set of wine glasses!  Only a dollar each!  Let's get some!   Oh, wait, maybe we don't need a set of wine glasses.   Well, if we did, it would be a nice deal.  Wouldn't it?  Oh, wait, we did buy our present set at the Syracuse China factory sale for 50 cents each.    Maybe not such a good deal.

My general take on it is this:  Dollar Stores are a mediocre bargain at best, aimed at the poor.  They are no screaming bargain, and if you don't go, you ain't missing much.

UPDATE:  Family Dollar, Dollar Store, and Dollar TREE are all different beasts.  Dollar TREE has everything for... a dollar.  They have good bargains on paper goods and soaps and whatnot (but NOT laundry detergent!).  But not everything there is a bargain, of course.  You still have to be an astute shopper by comparing prices with regular stores.   We regularly buy cleaners, car soap, jarred food items (although Walmart is undercutting even these, to 89 cents), tissues, mouthwash, and a few other things.   Many other things there are not a bargain - you have to compare prices to be sure.
Newer Post Older Post Home