You Don't Even See It! 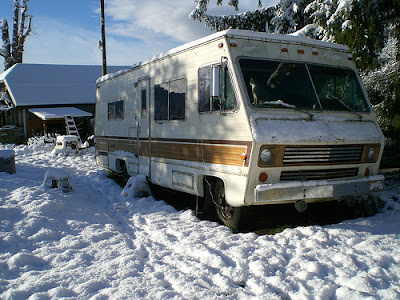 Realizing self-justifications for the idiotic reasoning they are is one step to alleviating this problem.  And the largest of these self-justifications is, of course, "I don't have time to deal with that right now, I'm busy!"   But you can deal with things, in small increments, sometimes, and get things done.   Realizing there is a problem - that needs to be solved - is the first step.
Getting a fresh perspective on your own life is one technique, which is why going on vacation is a good thing.  You come home and say, "What is this cardboard box doing in the hallway?"   It materialized, out of thin air.
And mentally, this also means listening to other viewpoints, instead of getting normative cues from the television and your equally-as-broke friends.   When everyone in Foreclosure Estates Mews talks about what great deals they got on their home equity loans, you may be tempted to thing that this is a good idea, and in fact, "Normal".   You may adapt to the idea that more and more debt is good, frequent-flyer-miles cards are a bargain, and that your credit score is the most important thing in your life.
And perhaps that is why I started this blog - to reinforce in my own mind that these are not normal things - that perpetual debt is not right, nor desirable.   That it is possible to build wealth, over time, if you spend a penny less than you make.
That is the norm I am trying to adapt to.
Newer Post Older Post Home