HereUare, Inc. and the JOBS Act. 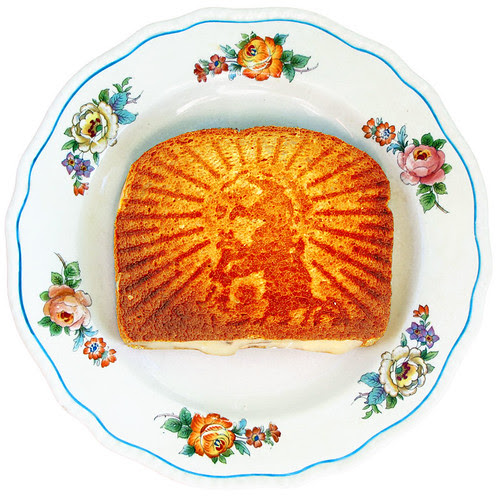 Under the JOBS act, "crowd funding" will be legal, and getting kickstart money for projects like the Grilled Cheesus sandwich maker will be a lot easier.   Is this a good or bad thing?

Under the recently passed JOBS act (Jumpstart Our Business Startups) folks will be able to more easily sell securities in startup companies without having to jump through a lot of hoops with the SEC and get officially "listed" on an exchange.

Is this a good thing?  Of course not.   It is horrible.   In an era when the excesses of the snake-oil salesmen and the carnival barkers have caused millions of people to lose Billions of dollars, collectively, the last thing we need is less regulation.

And HereUare, Inc. is an interesting example of this effect.   When you search for "Facebook Stock Price" on Yahoo! Finance, HereUare, Inc. pops up as a "related company" with a stock price of ZERO trading in the over-the-counter "pink slips" market.

What is  HereUare, Inc.?   Probably a bad bet, as they appear to be selling securities illegally, at least according to this Desist and Refrain Order from the California Department of Corporations, and haven't filed an annual report since 2010, according to this Administrative Proceeding at the SEC which effectively de-listed the security.  And some folks claim the whole thing is a scam, sold mostly to Vietnamese immigrants, hoping to strike it rich.  Another notes that he is being charged with Fraud by claiming to have created "the Next Google."

But under the JOBS act, such "formalities" are a thing of the past.   You can sell stakes in a new startup through something called "Crowd Funding".   Crowd Funding (or Crowdfunding) started off as a way for fans of obscure rock groups to band together to fund tours and even albums.   It is a startling breakthrough in that regard.

People have taken this a step further, for entrepreneurs, at sites such as KickStarter, which I wrote about before.

This technique is interesting, but it also raises concerns.   Since the amounts raised are usually fairly small, most "investors" in these deals would walk away if their money was taken and nothing given in return.   So they are ripe for fraud, as you could go on a site, create a fake business model, solicit $25,000 to $100,000 in donations, and then walk off.   Unlike a traditional stock offering or even a Subchapter-S corporation, there are few checks and balances.

But then again, with fraud rampant in traditional markets, maybe those checks and balances are illusory.  While HereUare was eventually shut down by the SEC, the investors never got their money back - nearly $8 million overall.   Where the money went, is anyone's guess.   It is incumbent on the investor not to fall for such schemes.

The JOBS act does away with what few checks and balances exist.   The SEC has 270 days from the implementation of the act, to set up Crowdfunding and select an entity to host this activity on the Internet.

From one perspective, this may be considered a good thing, as it allows sites like KickStarter to operate without fear of running afoul of Securities laws (although if Kickstarter is not chosen as the "official" site by the SEC, it may fade away rather quickly).  Crowdfunding advocates surely will welcome this.

And it is possible, with Crowdfunding "legalized" it may be possible to monitor it and weed out the fraudsters - if the SEC has a budget for oversight.   As the HereUare example illustrates, though, even when they take action and "take out" a company accused of fraud, they can do little but stop trading in the company, once the money has already changed hands.   They close the barn door, after the horse has bolted.

But on the other hand, it also means that companies like HereUare needn't worry about things like the State Corporation Commission or the SEC, if they want to raise capital.   And this could result in a number of bad bets being hyped to investors - all under the rubric of "Crowdfunding".

But again, as with anything else - from onerous credit card debt, to car leasing, to student loans, to the Facebook IPO, to condos in Vegas, to Gold, you can't get "ripped off" if you don't sign up.

And people fall into these traps based on dreams of avarice - they want to strike it rich, or have a fancy car, or whatever.   And it usually goes horribly wrong, too.

With crowdfunding, it doesn't appear you would end up losing your shirt - unless of course, you decided to go and fund every single thing out there and spend your every last dime.   A more serious threat, I think, is that people will "invest" trivial amounts of money, as long-shot "what if" investments - like buying lottery tickets.   Like the guy who bought $500 of Facebook at $40 a share, they will figure, "Well, what have I got to lose?  It's just $500, and you never know!"

It makes no sense at all.   And that is my concern with Crowdfunding - a lot of people will toss away money, then later complain they are broke, and that I should pay them, through my taxes, to fund their wasteful lifestyle.
Newer Post Older Post Home