Should You Build a Bunker? 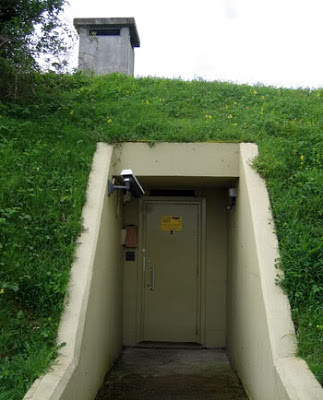 Does building a bunker make any sense?


A lot of folks today think the world is coming to an end.   Well, actually, it is a small minority of folks, but they are very loud people.   And some of them are building bunkers for the end times, either literally or metaphorically.  What do I mean by this?

A good friend of mine who is a fundamentalist Christian (not the hatey kind) once told me that he home-schooled his kids.  When I asked him why, he gave me a serious look, and then said, "I don't want to send them to the gub-ment school!"

I was silent for a moment and then he broke out laughing.  "I really had you there for a moment!  You should have seen the expression on your face!  Priceless!"

As it turns out, some of his kids were home-schooled, and others went to public school - they had a choice.  But, as he put it, if you home-school your kids, people think you are some sort of freak who is building a cabin out on the woods and stocking it with canned goods.

"Although," he admitted, "I am building a cabin out in the woods!"

He showed me pictures - it as more of a vacation lodge.  But again, as a self-identified Christian, he can't really tell people he is building a cabin in the woods, without raising some eyebrows.

But the stereotype he was spoofing does speak volumes - there are websites and magazines and all sorts of "survivalist" groups that believe the end is nigh and that building a bunker is the only way out.

Unfortunately, bunkers are very, very expensive to build, and spending tons of money on canned goods and bottled water on a long-shot "what if?" neglects the all-too-possible outcome of nothing happening, and you outliving your money - ending up destitute in your bunker.

In fact, the world not ending seems to be the big beef these people have.   It should have ended long ago, according to them.   What's the big holdup?

Similarly, investing with end-of-the-world scenarios is equally as risky.   The idea that the United States will go bankrupt and default on its obligations, be taken over by space aliens, or that we will all revert to a subsistence existence, hunting squirrels with black-powder rifles, is, to say the least, a little far-fetched.

Why do I say this with authority?   Well, our country has endured far worse crises that the present ones, and survived and thrived.   And moreover, the vast majority of the 330 Million people in this country have too much invested in our current system to see it overthrown or abandoned.   You might think the end of Democracy is nigh, but a lot of people will literally fight you on this.

So buying bullets and canned goods is not a "smart" investment, unless in retirement you want to eat expired canned goods in your basement bunker and shoot off moldering damp ammunition for entertainment.

Similarly, the idea of investing in gold (or silver) as a "safe harbor" for the end times, is equally as ridiculous.   And that is the "logic" that gold-bugs use to sell you gold - that the world economy will collapse, and you, sitting on your hoard of gold, will be in the cat bird's seat.   Unfortunately, the fellow who invested in bullets will likely take all your gold, then.

And if you invested in bullets and gold, well, here's the deal.  Suppose the world doesn't end as you'd like it to (and admit it, you have dystopian fantasies about this - the result of watching too many video games)?  What then?   Suppose the economy - as it has since the founding of this country - actually recovers and prospers?

What then?  What do you do with bunker investments when no one longer wants to buy bunkers?

And this literally has been the case in years past.  In the 1950's, some Americans spend thousands and thousands of dollars - more than the price of a new car - building backyard bunkers.   Today, most are filled in, or mere novelties.   They ended up being colossal wastes of money.  They were sold on FEAR and fear alone, and that is the worst way to buy or invest in anything.

Similarly, in 1979, when unemployment was 10% (and yet I had a job) and mortgage rates were 14%, and you could only buy gasoline on even or odd days at the gas station (and coffee and peanut butter were being rationed!) people started buying gold.   They drove the price of gold into the stratosphere, and then, once the economy recovered, it sank back down and stayed there, for twenty years.   The "end times" investment strategy turned out not to be such a swell idea.

Despite the fact that a lot of people engage in "fake investing" - buying hyped stocks like the Facebook IPO (which seems to be staying pretty flat, so far), there are actually stocks in the marketplace that are holding their values - companies that make products, sell them at a profit, and pay dividends on a regular basis.   I own a lot of such stocks, and they pay off rather handsomely, even in a recession.  People need electricity, to buy food, clothing, and whatnot.   And these sorts of companies, while not sexy or talked about by the shouting guy, crank out profits every quarter.

And yea, they make up the bulk of the market - the part of the market that no one talks about, because it doesn't make dramatic gains.   And anything that happens gradually isn't considered "News" just as a slow leak in your roof isn't covered by your homeowners insurance - but a branch falling through it, is.

The odds are, the end of the world won't happen in your lifetime.   Betting on this is thus a sucker's bet.   What will more likely happen is that you will retire or be laid-off, and you will spend your retirement years, bitter and angry that you spend all your money on foolish things, rather than saving.

Bunker investments are a bad bet.  There is no profit in them, quite literally, and no growth.
Newer Post Older Post Home