The Real Power of Prayer 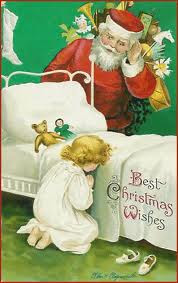 Most people think of Prayer as they would a letter to Santa Claus.   They are missing the point.

There is a small scene in the movie Driving Miss Daisy, where Hoke, the Chauffeur, is eating his lunch in the kitchen, while Miss Daisy eats her meal in the dining room, alone.   Before he eats, Hoke says a short silent prayer in thanks for the meal he is about to receive.

It is a brief scene - mere seconds on screen.   But is is a powerful scene, nevertheless, as it shows Hoke being thankful for what he has, not pining for what he has not.

Being thankful for what you have is the point of Prayer - not to ask for more.

Yet, most modern religions, particularly the new hatey-kind of Christian sects, preach the latter - that God is Santa, handing out the goodies, and all you have to do is pray for what you want.   And if he doesn't give it to you, then you did something wrong - or your country did.  He keeps a list of who is naughty or nice - and the "good Christians" will get bling and eternal life.  Or so the story goes.

My old neighbors (back in 1985) were sucked into one of these wacky "churches" that met in an old storefront or the basement of some other church.   They believed that if you prayed hard enough, you would get swag from God.   And when they bought a rusted-out 1977 Chrysler Cordoba, running on 7 of its 8 cylinders, she told me, "Jesus gave us this car!"

To which I replied, "I wonder what you did to piss off Jesus?" - because the car was a load of shit.

But that is the attitude today - not to be thankful for what you have, but to want more, and to petition God for it.   Is someone sick?  Ask God to cure them!   Is someone out of a job?  Then ask God to intervene!   Is someone poor, feeling sad, or having a run of bad luck?   Ask God for help!  And if he says "No" then you must have had it coming, buddy!

This is sick thinking of the first order.

The problem with this approach to Prayer - and religion in general - is that things happen in the world for no reason whatsoever - or at least no reason that we can discern.   So the idea that there is an order in the universe and that a tree limb falling on your house is an act of God (according to the Insurance Company, anyway) really makes no sense.

You can pray all you want, under that model, and bad shit will still happen to you.   Grandma will still die, your Cordoba will drop a rod, and your credit card bills will not get paid off.   In fact, this form of prayer is hurtful, as it fills the petitioner with false hope, and then castigates them with fault, if their wishes are not granted magically.

It also prevents them from being self-actualizing and taking initiative in their lives - when they can.  It encourages passivity and makes them easier to manipulate.

But the first type of Prayer - a Prayer of Thanks - is a very powerful thing indeed.  Why is this?  Because if you take the time in the day to give thanks for the very simple things in life, you appreciate how little you really need in life, and what daily miracles are indeed heaped on your doorstep.

Giving thanks for a meal may sound dumb, until you realize that the human brain is a calorie-hog and needs food to survive.   And food on the table is not something trivial - but something that many people on the planet (but not in this country) don't see on a regular basis.

Once you realize how blessed you are, life doesn't seem all that harsh.   And you realize that your "problems" in life are largely self-inflicted, caused not by your need for basis sustenance, but by your greed for a used Chrysler Cordoba.

Today in the mail is a letter from something called "Saint Matthews Church" which has all this weird writing that is bolded and then underlined in red marker and then highlighted (and very odd words chosen to highlight!).

The upshot?  If I pray to the enclosed "Prayer Rug" (a sheet a newspaper with a picture of Jebus on it) I will have money beyond my wildest dreams!

Accompanying the "Prayer Rug" is an "article" about a woman "Blessed with $46,000 after using Prayer Rug!"

That is what God is all about, right?  Handing out money to people?

Talk about missing the big picture!

"Dear Saint Matthew's, My husband listed 7 things that he wanted God to do for him....He sent it off the same day which was the second day of Feb. and last Sat. GOD BLESSED US WITH $10,700.  HE WENT OUT AND BOUGHT US A CAR...Enclosed is a....donation from both of us..."

Note that bold and ellipses are in the original....

Wow, not only does God throw money at you, he acts as your personal shopper and actually goes out and buys the car!  I wonder what God looked like?  Did he fill the tank?  Does he offer extended warranties?  Sounds like a swell deal to me!  I don't know about YOU, but I'm sending my money in to this church - they rock!

This truly IS a sign of the "end times" that religions are whoring for parishioners by offering A NEW CAR! like Monty Hall did on "Let's Make a Deal!"

How about your soul for what's behind curtain number one?

Sorry, but I just had to scan this in, it is too funny (click on image for larger view): 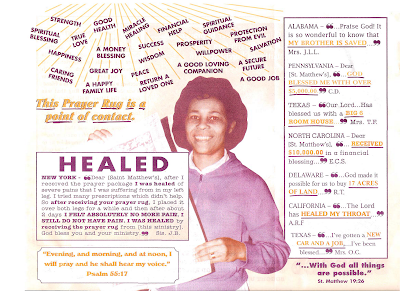 God is giving away FABULOUS PRIZES (and so is Bill Gates!) And I won a $100 coupon for Red Lobster, at least according to an e-mail I received today.  Here is the pitch - SEND BACK the "prayer rug" after praying on it, and then, just check off what you want!  There was not check box for "New Gulfstream Jet" so I didn't send it in. 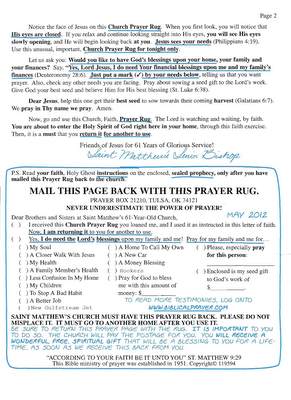 "Church Prayer Rug for tonight only!"  - no double-dipping on Jesus!   Note that the "Senior Bishop" apparently doesn't have a name - he just signs "Senior Bishop".  Perhaps he is Mexican, and his last name is "Bishop", so he is signing "Señor Bishop" and something got lost in the translation.