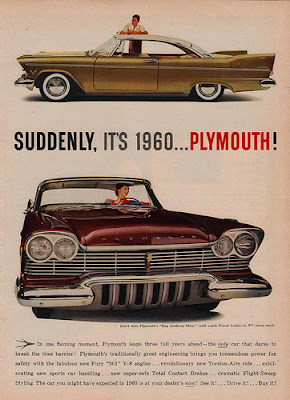 Plymouth touted its 1957 models as being ''three years ahead'' of the competition.  But by 1960, tail fins were a thing of the past.  So much for modernism.

Penicillin seems like such a simple idea, in retrospect.  Yet until about midway through the 20th Century, people were dying - in droves - from simple bacterial infections.  More people died in the Civil War from infection that from wounds.  And something as simple as an ear infection could end up as a death sentence.

Quite frankly, I would not have lived long in that era, as in the past I have had ear and nasal infections as well as bouts of diverticulitis.

Today, we consider ourselves quite modern - advanced, sophisticated, technologically superior.  But the funny thing is, people back then felt the same way - every generation does.  And yet, in only a few short years, we will look back and shudder at our primitivism and lack of sophistication, convinced that the knowledge of a new era makes us so much superior to our crude ancestors.

Worse yet, much of what we consider modern thinking is usually a re-hash of what went on, just a few years prior.  We never really learn, it seems.

So we laugh at the folks "back in the day" falling for Ponzi schemes or other get-rich-quick gags.   But then Bernie Madoff demonstrates to us that we aren't so sophisticated and modern after all.

We scratch our heads in wonderment how people could be caught in the railroad bubble of the late 1800's, and then bid "dot com" stocks through the roof - 100 years later - and sit in amazement when it all blows up in our face.  And less than 20 years from then, we all salivate at the prospect of having the privilege to buy a tiny minority share in a money-losing company that is talked about a lot in the media.  Obviously, we know better, now.

Or the great depression - how stupid was that?  People bid stock prices up into the stratosphere and didn't see the writing on the wall.   I'm glad we're so much smarter than that, today!  Oh, wait....

And during the depression, then what?  People embrace Communism, Unionism, or Demagoguery - or fundamentalist preachers who talk on the radio, non-stop.  Fortunately, we are smarter and more sophisticated today.  No one would believe, seriously, in the failed ideologies of that era, would they?  Of course not.

But of course, I am just being sarcastic.  In reality, people pretty much are about the same, from generation to generation - and have not advanced much, in terms of psychology, intelligence, or sophistication, since the dawn of time.  We are still prone to our lesser and baser instincts.  We are still prejudiced, we are still gullible.  We will believe whatever it is we want to hear.  Tell us we look good and can get something-for-nothing, and most of us scramble to get out our wallets.  People just haven't changed - we just have a lot more technological shit to do things with.

So, what does this have to do with finances?  Well, a lot.  One reason, I think, that people get themselves into trouble, on both a personal, national, and global scale, is this false belief that we are so much more sophisticated that people in the past - often the fairly recent past or in fact, ourselves just a few years ago.

For example, in 1995, young entrepreneurs started "dot com" companies that hemorrhaged cash.  When asked about their lack of profits, they sneered, "Profits are a thing of the past!  Today is a new paradigm!  The Internet has changed everything!"

And of course, the Internet, while changing much, hadn't changed the basic profit/loss scenario that is not only the underpinnings of Capitalism, but of nature itself.  And within a few short years, or as with the case of Pets.com - before the year was out - their stocks went from high-flying superstars to bankrupt.

But, that was 15 years ago - an eternity in the tech world.   And many young investors today were pimply-face teens when all that happened.  Today, of course, is far different.  We've learned our lessons from the tech bust of 1995!

But have we?  People are getting all riled up for the next round of IPOs of money-losing "dot com" companies - and have put on their blinders.  The media hypes these companies and doesn't point out some of the fundamental flaws in the offerings.  The media often, in fact, touts horribly bad investments or raw deals.

For example, you would think that by now, we would all be too sophisticated to fall for schemes like "penny auctions" - where you pay, not pennies, but 60 cents to a dollar, just for the privilege of bidding.  And I have written about these before and what a bad bargain they are.  You pay to bid, and the only way you can "win" is if everyone else stops bidding.  It is not an auction at all, really, just a lottery, where you pay 60 cents a ticket.

But the media - bless their souls - hypes the snot out of this stuff.  CNN recently ran a piece about a guy "winning" a car for $5.  Now, to be fair, they point out that most of these auctions suck - that you pay more than the retail price with your bids for the item.  But they don't bother to tell us what the fellow who won the car actually paid, in terms of bids.  And even with warnings, they cheerfully report that you should "be informed" before you take on this exciting and fun new hobby!

It is sort of like saying, "Well, you know, there are downsides to smoking crack, so be sure to read this pamphlet about it before taking up this exciting fun new drug!"  That's responsible journalism.  In reality it is just a huge advertisement for horribly bad personal behavior.

And at least once a day, someone finds my blog by searching on the terms "sniping QuiBids" which tells you they really don't understand penny auctions in the first place.  People are idiots and there appears to be an endless supply of them.

But of course, to some folks, this is not a problem.  People are idiots, to be sure.  But they also can be harvested like corn and slaughtered like cattle.  The fact that people are stupid with money is not a problem, but an opportunity.  And many of these folks make an awful lot of money from other people's stupidity.

Now, you could argue, as my hippie friends do, that this is just awful and another sign that Capitalism is evil, corrupt, and venal.  Good argument, but it fails on two grounds.  First, Communism is so much worse.  Second, trying to "fix" other people's bad behavior never really works.

The great thing about Capitalism is that you do have choices and if you can see through the media smoke-and-fog and their distracting noises and lights, you can make choices that make your life better.  You can eschew the media and TeeVee and all the poor normative cues and stop spending money on crap like "smart phones" which don't make your life any easier than it was 20 minutes ago before we had them - just more expensive.

Once you buy into the idea (literally) that you need to buy things to be happy - and that owning things is a sign of wealth - then they have you.  And you have fallen for the oldest gag in the book - one that ensnared our ancestors since the dawn of time - the lure of the money-lender and the merchant, and the despair and distress of poverty and the poor-house.

You may think you are sophisticated and modern, but you are hardly smarter than our disease-riddled ancestors of 100 years ago - if you fall for the same gags they did.