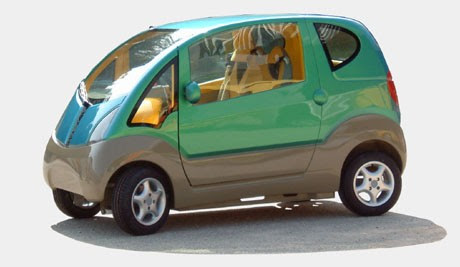 Should you invest in compressed-air powered cars?  No.

A few years back, when gasoline hit $5 a gallon, a fellow in France was making headlines by touting his compressed air car.   The media had a lot of fun with it, touting it as a car that "runs on air!" which of course, it really doesn't.  It just uses an horribly inefficient means of storing energy through compressed air.

So while you can build a compressed-air powered car, it suffers from two major problems.  First, the efficiency of compressing air and then using it to drive a motor is about half that of an internal combustion engine.   So in terms of "energy savings" it is a non-starter.   Second, the range of such a vehicle is limited, as the volume of the storage tank, even for short trips, has to be huge.   In other words, compressed-air vehicles make battery-powered cars look like rock stars.

The proponents of this "technology" (which has been around since the early 1900's) say that these problems can be worked out, over time, with further investment and research.   However, unlike battery technology, which has improved dramatically since the days of the flooded wet cell - with promises of improvements to come - compressed air really has nowhere to go, in terms of the laws of physics.

In other words, this just isn't happening.  It ain't going anywhere.   So why were people following this?

Well, as I noted in Free Gas, the plebes will bite on anything having to do with gas savings.   People are obsessed with the cost of gas, as they are obsessed with driving like maniacs all over the place.  To the average debt-slave, the idea of driving for free has the appeal of 1,000 simultaneous orgasms.

So, when you tell people they can get something-for-nothing, well, they buy into it, big time.   You tell them the government (or the oil companies, or both) are suppressing the "100 mpg carburetor" or the Howard Johnson Motor, or perpetual motion, or cold fusion - or whatever.  And they believe it.

And if you ask them to invest in these schemes, well, like Ralph Cramden, they believe their ship has come in, and they hand over what little money they have, with their blubbering thanks!

But of course, the factories were never built - and never will be.   And the compressed air car is constantly said to be entering production "next year!" or  is in pre-production, or whatever.   Problem is, "next year!" has been every year since the mid-1990's!

Well, actually, the investors, usually being elderly people duped into these schemes, are too embarrassed to admit to squandering money on this sort of junk, and as a result, the fraudsters are rarely prosecuted.

The Patent Office used to reject Patents directed toward perpetual motion machines.   However, this backfired, as the "inventors" would then nail themselves to the cross and claim that the Patent Office was "in on the conspiracy with the oil companies and the government" to "suppress the technology" and prevent it from being marketed.  As a result, the Patent Office stopped going out of their way to reject such Patents.  If they allowed a Patent, the "inventor" would claim it was "proof" it worked.  If they rejected it, the inventor would claim this was "proof" it was being suppressed.

And in the 1980's, I recall one fellow doing this with his miracle battery.  He even got on the Johnny Carson show!   Like I said, the media loves these stories, particularly if they can pitch it as "the little guy versus the big, bad, oil companies" kind of deal.

And usually, the inventors end up being caught up in an investment scam.  The inventor may really believe they have invented cold fusion or perpetual motion or the compressed air car.   But then a fellow approaches them and convinces them to sign up with him, and it is usually this other fellow who turns the whole thing into an investment scam.

As it turned out, the miracle battery was no miracle, just a case of instrumentation error showing apparent energy gain.   We actually did the same thing once, at Carrier, showing a motor having 110% efficiency.   And no, the motor company did not "snatch away the prototype" which was released mistakenly.

Rather, the technician involved did not understand that an AC watt-meter is calibrated for a certain frequency range, and by using a chopping inverter for variable speed operation, the meter was not providing a proper reading.   As an instrumentation technician, I understood this right away, of course.   But a lot of folks see a reading on a meter and assume it is the word of God handed down from the mount.

Why is following these sort of scams bad for you - even if you don't squander your life's savings "investing" in them?

Because it does you no good - it adds nothing to your bottom line - and it encourages weak thinking, and wishful thinking, as well as self-destructive behaviors.  It is no better than obsessing about the Kennedy Assassination, or claiming to be a "9/11 Truther" - it just makes you a real drag to be around at parties, and likely, unemployable.

People who sign up for conspiracy theories end up squandering their emotional energies on dead-ends.   And moreover, they ignore the far more relevant conspiracies that are right out in the open.

For example, why do you suppose the media loves these sort of stories and stokes them like a smoldering fire?  Think about it.

Yes, they want you to be passive, and emotional, and angry, and above all, watching television all the time, so they can sell you, like a whore, to advertisers.

Why?  Because if you got your fat ass off the couch and started thinking about your own life, and how the decisions you make in your life really affect it more than anything else, you might become self-actualizing.   And a person who is self-actualizing doesn't do stupid, emotional things, like buy a 15 MPG pickup truck, or an overwrought mini-mansion.   The self-actualizing person doesn't watch the TeeVee and buy Glen Beck's gold.

That is the conspiracy that is out in the open, for anyone to see - if they are just willing to look right at it.

Breaking free of the cycle of consumerism, debt, and misery is not hard to do - but you first must break free of a lot of bad ideas that are holding you back.   Television flings these ideas into your head at the speed of light.  Turning it off and walking away from it is the first step.   Not getting sucked into dark conspiracy theories is a second.

No, there will not be a compressed air on the market, ever.   Why can I say this with certainty?  Because I don't watch the hoopla on television, but I did take Physics in college - and minored in Industrial Hydraulics and Pneumatics.   You can engage in wishful thinking all you want to, myself, I will rely instead on Boyle's Law.    When it comes to perceiving reality in our universe, I think that is a far better approach.
Newer Post Older Post Home