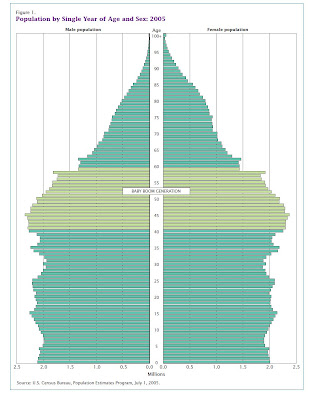 Nature tends toward equilibrium.   While we may view unemployment as "high" today, things will trend in the opposite direction shortly.

The price of gold triples in a matter of a decade.  Apple Stock soars to $600 a share.  The price of housing goes berserk.    What do these trends all have in common?

Corrections are coming.   Why?  Because the only thing you can reliably say about any trend, is that it is never sustainable, for the long term.   Nature abhors a vacuum, and nature also abhors systems that are out of equilibrium.  What goes up, must come down.

And it is simple math.  If Apple is making record profits selling little electronic devices, then other companies will see those profits and join the fray.   And they are, and collectively, they make up 2/3 of the smart phone market - and the pad market, shortly.

Gold shoots up in price, granny melts down her gold (or it is stolen by a crack head who melts it down).  Old gold mines all over the world reopen to dig for it.  Pretty soon, supply catches up with demand.  Bank on it.

So what about the labor market? We are told how hard things are today for people, with unemployment rates at 8-9%. However, historically, this unemployment rate is only a few percentage points higher than the background "noise" rate.  Unemployment rates rarely drop below 5%, even in a good market, if only because 5% of us are just not very good employees, and are usually out of a job.

But of course, for recent grads, the rates are as high as 25%, which is troubling.  But not for long.  What goes up, must come down.

And how can I say this with certainty?   Well, I was discussing this with a friend last night, and he pointed out that the age pyramid is sort of like a minaret these days, as I have discussed before.  What this means is that there are fewer young people today than in previous generations - or at least the younger generations are not expanding as when I was a youth (the group born 1960, my peeps, is the widest part of the chart shown above).

The chart should look like an ordinary pyramid, under a normally growing economy.   While our population continues to grow (mostly because the top of the chart keeps moving upward to new levels - people are living longer) the bottom is more of a cylinder than a pyramid.   This is a startling development.

And in the next 5-10 years, you are going to see a lot of people at the top of this chart check out.  The baby boomers are only a decade away from reaching the median life expectancy in America (about 76-79).   And long before then, most of them will retire, perhaps in as little as 5 years.

What does this mean?  Jobs opening up, soon, and no one to fill them.

If you are in your 20's and lamenting the current job market, take heart.    I was in your shoes back in 1982, when unemployment was at its highest since the great depression (10.8%).   But things turned around fairly rapidly in the 1980's and by the 1990's, it seemed like anyone could have a job, just for the asking.   These things never trend in one direction forever.  And the turnaround is often faster than you think.

However, if you watch "Gloom and Doom News" in the television, you might not believe that.   Heck, they were chanting doom and gloom back in the 1990's when things were going great.   Stop watching television.  I cannot emphasize that enough.

Of course, this may be cold comfort to finding a job today.   But finding a job in any job market (and 8% unemployment is a pretty good market) means only two things:  First, having skill sets that will enable you to find a job, and second, being able to work for the wages offered.

One thing that turned around the job market in 1982 was simply the expiration of unemployment benefits, which caused a lot of people to take jobs they otherwise would not have.   And once they went back to work, the economy started to recover.  Before long, they were getting raises or getting better jobs and making more money, and of course, this lead to more spending and then more hiring.   These things are very cyclical.

I think today, though, the demographics of the age pyramid will make this change more pronounced and sudden.  Combine this with our ill-advised idea of tossing out all our working immigrants (who will take jobs that no one else will) and you can see that a Labor Shortage will not only be possible, but inevitable, within the next 5-10 years.

And such a labor shortage could cause wages to rise rapidly, leading to inflation.   But let's not worry about that just yet.....
Newer Post Older Post Home