Auctions - A Waste of Time and Money 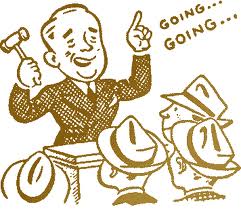 Are auctions a good deal?  Rarely.

As I noted in my SCAMS posting, I listed all Auctions as basic scams.  Why is this?  Well, auctions are great deals for sellers but often not for buyers.  Which is why it is great to sell on eBay, but often not so great to buy.

The basic problem with auctions is that often, if you go to one, you end up "shopping" and thus buying things you had no intention of buying, and perhaps later on have regrets about buying.   Like with a Casino, it is all too easy to get caught up in the hoopla and the hype and end up buying stuff you don't need, often based on the perception that it is a "bargain".

But unless you can re-sell it again at a profit, it often is no bargain.

For a buyer, the auction is fundamentally problematic in that you are negotiating with the seller in the company of other buyers.  Think about this for a second.   Suppose you go into an antique shop.  It is dusty and quiet, and you are the only customer in the store.   The slightly bitchy old gay man who runs the place (OK, maybe not slightly) is the only other person in the shop, and he has a desk full of bills marked "past due".

You see a craftsman-style quarter-sawn oak chair that appears to be an original Stickley.   You ask him how much he wants for it.  He comes off with a high price.  You negotiate.  He balks.  You start to walk out.  He says, "wait a minute!"  and before long, you are driving home with a real bargain.

Now imagine that same scenario with two buyers in the store.   Not such a hot deal, if you are bidding against each other, is it?

And that is the fundamental problem with an auction - one seller, many buyers.  And when buyers exceed sellers, demand exceeds supply, and prices can shoot way up, even if only two people are bidding.

But the problem with auctions doesn't end there.  There are host of ancillary problems as well:

First, you don't have much time to inspect the merchandise, figure out what it is worth, and work on a bid strategy.   Unless it is an art auction at a big auction house, who publishes catalogs months in advance, that is.  Your local auction house brings stuff up on stage, and that may be the first time you see it, other than perhaps in a "preview" an hour before the auction.   Not much time to really think about whether you want this stuff or how much it really is worth.

You are being presented with goods and then asked if you want to buy.  You are not making a decision to buy and then cross-shopping goods from different vendors on price and quality.   You are just mall shopping - impulse purchasing - in the worst way.

Second, they use shills.  Act shocked.  And it ain't illegal in many markets.  A guy in the audience bids against you.  He works for the auction house.  He makes sure the item will sell for more than a predetermined hidden reserve price.   If he "wins" the item, they just re-list it next week at the next auction.  Nothing is given away for free.

Well, once in a while, the shill "wins" a piece for very cheap, and this gets the cattle in the audience all riled up.   The auctioneer will take a low bid from the shill and then say "going once! SOLD!"   And then you think, "I don't want to let the next one slip out of my hands!  I'd better bid faster!" and that is exactly what they wanted you to think.

Welcome to the slaughterhouse!

Third, there is no such thing as a "no reserve auction"!   A "no reserve" auction is an auction where the items being sold are sold to the highest bidder regardless of how low the price is.  Yes, they advertised it as "no reserve" - but in almost every State, they are allowed, on the day of the auction, to change it to a reserve auction. And with shills, who even needs a reserve?  If no one bids up to the price they want, they have their shill bid, and then just sell it to themselves.

Fourth, auctioneers can be sleazy.   Another trick they use is the "Chandelier bid" - you are bidding on an item and the auctioneer, in his rapid fire talk, points vaguely at the chandelier in the room and calls a higher bid.   You are bidding against no one, other than numbers the auctioneer is pulling out of his ass.  They do this to prevent a piece from being undersold, or to try to get you to bid higher, or to make it appear there are THREE people bidding (you, the shill, and the chandelier) when in fact, you are the only chump in the room bidding.

Why do you think auctioneers talk so fast in the first place?  To confuse you, to distract you.   And since you are concentrating so hard on what he is saying, you may miss what is really going on.  Auctioneers don't talk fast because they are in a hurry (think about this, auctions do take time, and no time is saved with their non-stop patter).

There are legitimate reasons for auctions.  When a bank or an estate auctions off the contents of a farm, for example (or storage locker people auction off the contents of lockers), they do so to sell off the property right away.  The want this stuff SOLD in ONE DAY, and an auction will do that, an yield some reasonable prices, and sometimes - sometimes - some bargains for buyers.   Even then, professional bidders at such auctions may snatch up the best deals and outbid you.

But permanent "auction houses" that exist in many urban and rural areas, are often little more than junk shops that are selling entertainment more than they are actual bargains.  And many people see them as just that - a chance to go out and have fun, and spend a little money, and who knows?  Maybe we'll win something!  The same excuse used by people who go to casinos.

And auto auctions - open to the public - are just as bad, if not worse.  Buying a car under circumstances where you cannot inspect it or rationally think about pricing is ridiculous.  Think about it.  If you went to a used car dealer and they said "I'll sell you this car, but you have only 10 minutes to inspect it and 90 seconds to think about the price" you'd walk away and call the salesman a madman - or worse.

You are not missing out on fantastic bargains by not going to Auctions.
Newer Post Older Post Home