BANKRUPTCY is not a Dirty Word! 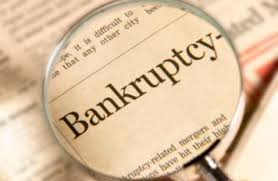 Bankruptcy is not a dirty word!


Your average plebe is scared to death of a number of words: Bankruptcy, Foreclosure, Probate, Audit.  To the unwashed masses, these are events that are worse than death itself.  In fact, some commit suicide rather than face such consequences.

Our society has created these sorts of legal procedures in order to help people.  Yes, often they are unpleasant, just as having your wisdom teeth out can be unpleasant (although, with the anesthesia they give you, odds are you won't even feel a thing).  But leaving your wisdom teeth in, is not a sound alternative.  Rather than face a brief unpleasantness, you are trading it for a long-term misery.  This is sound thinking?

The FEAR of these events causes people to do really, really stupid things.

For example, taking the last item first, you regularly run into people who don't file tax returns for years at a time.   They go through life convinced they will be hauled off to jail at any moment.  And then you explain to them that not only will they not likely face jail time, but that they will probably be due a refund, they act mystified.  After all, the IRS is this evil heartless government agency that is out to destroy them!

Well, that is hardly the case.  An Audit is hardly the end of the world.  Yes, they want to collect taxes, and yes you should file a return.  But there is no penalty for not filing a return on time, if you do not owe taxes.  And even the worst tax delinquency scenario can usually be worked out with a payment plan.  Unless you are intentionally trying to cheat the government by hiding income, chances are, they are not going to seek a criminal indictment.

As I noted before, a friend of mine who worked for the IRS once told me that the irrational FEAR people have of the agency is their greatest weapon.   The IRS does nothing to dissuade people of this FEAR, and horror stories of the "Audit from Hell" are allowed to circulate, as they help keep this FEAR circulating.  It is a pretty effective system!

Probate is another one of those things that the uninformed fear, for no reason.   Many people jump through hoops to "avoid probate" - as if probating a Will were some horrible consequence equivalent to the Spanish Inquisition.   But you can probate your parent's will.  It ain't hard to do, if there isn't a lot of money there (and anything under a million dollars isn't a lot of money).  Your local court clerk can be very helpful.

But middle-class people, afraid of things they don't understand, will set up a "Trust" to protect a paltry $100,000, convinced that "avoiding probate" is worth $1500 in legal fees.  Fools.

Foreclosure is another word that scares people.  From the era of the silent films, to The Grapes of Wrath, the movie industry (our media) has instilled this fear of Foreclosure - and the idea that Banks are being unreasonable by asking that loans be repaid in full.

But of course, if you borrow money, you have to repay it.  If you were the lender, you would see this concept in very simple terms.  You are not "making money" on a loan where someone pays back at 5% interest for a few years and then walks away on the balance.  You lose, period.

And if we allow people to walk away from loans that are no longer convenient to them, well, then no one will be able to borrow money, as banks will shy away from lending.  And to some extent, this is a problem today, as we talk more and more about "loan forgiveness" and ask banks to swallow tens of thousands of dollars in losses per loan for home mortgages.

Who in their right mind would loan money today, under these circumstances?  Where everything is constantly up for negotiation and re-evaluation, based on market circumstances?   And why is this fair to me, who has a good credit rating and no debt, but likely cannot get a loan, simply because banks are afraid I will join the chorus of debtors who will say, "I ain't paying it back, and foo on you!"

Foreclosure is a process that was established hundreds of years ago.  You pledge a piece of property as collateral on a loan and the lender has a right to take that collateral if you do not perform on the loan.  It is a very old concept, and thus no one can claim surprise at this.

And in fact, this is why many banks are dragging out this process, hoping the market improves, and realizing that a property occupied by a non-paying mortgage holder is better than an abandoned property.

But on the other hand, the sooner they can sell the property and wipe the bad debt off the books, the sooner they can move forward.   And this decision is up to the lender, not you.   So you can argue all day, until you are blue in the face, about the "unfairness of it all" but the bottom line is, you signed the papers, you knew what would happen if you didn't make the payments and you know what to expect, now.

You can whine all you want, but taking action is better than having the Sheriff haul all your shit out on the lawn and toss your ass out.

And in this regard, Bankruptcy can be your friend - staying foreclosure proceedings for months, if not years at a time.  But Bankruptcy is another one of those things people are irrationally afraid of.  You see articles in the paper all the time about Joe and Suzie Homeowner, who are "struggling to get by" and cashing in their 401(k) to make the mortgage payments on their upside-down home.

If they are insolvent, they could - and probably should - declare bankruptcy, forestall the foreclosure process by months or years (giving them time to make plans and put money aside) and protect their 401(k) and retirement plans.

Instead, because of this irrational fear of Bankruptcy, they cash in the only things protected from Bankruptcy and end up totally, utterly, and completely destitute.   Or in other words, proper fucked.

And you see this all the time online - fraudulent companies advertising to "reduce your debts, without Bankruptcy!" as if Bankruptcy was something to be avoided like the plague.  And in a way, their advertisements are selling that normative cue - that Bankruptcy is bad and evil and shameful.   But it isn't - if you are insolvent, the shame is already there.   Not taking proper action is just compounding the shame.

So, otherwise rational folks do stupid things like cash in their retirement savings to "hang on" to a house they cannot afford and to pay for a lifestyle that is beyond their means.

But people do this, everyday - hundreds of them!  Thousands of them!  Perhaps Millions of them!  Convinced that "Bankruptcy" is so bad and shameful that it is worth destroying the rest of their lives to avoid it.

Our society created these legal remedies to help people, not harm them.   In years past, in Jolly Olde England, a person who was insolvent was thrown into debtor's prison, often to die.   We see beyond that now, and offer people a limited "do over" if they fuck things up properly.

It is like the rainy day fund that many folks keep.   When they run into financial difficulty, rather than cash in the fund, they borrow more money convinced that they should save that money for a rainy day.   Look outside.  It's pouring rain.

If your finances are in trouble, and you are thinking of tapping into your 401(k), your IRA, or your pension fund, think again.  Chances are, you are insolvent, and you should think about Bankruptcy as a real option, in a non-emotional and logical way.   Talk to a real bankruptcy attorney in your jurisdiction, not some come-on "company" that advertises on the Internet.

You may find out that, stripped of the emotional baggage, Bankruptcy is not such a bad option.
Newer Post Older Post Home