Public Radio has abandoned all pretense of neutrality.
It is now the Fox News of the Left.
We all suffer when truth dies.
Your tax dollars pay for Union Propaganda.

On NPR this weekend, this bit of horse hockey:

"For many full-time employees in the United States, the five-day work week, paid overtime and holidays are expected benefits. This wasn't always so, and many workers' benefits today are the achievements of labor unions."


Henry Ford instituted the five-day workweek and the 8-hour shift, long before his plants were unionized. 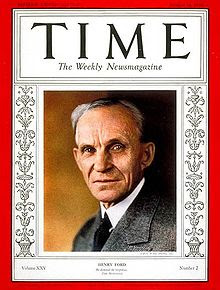 Time Magazine, January 14, 1935.
Ford was a pioneer of "welfare capitalism", designed to improve the lot of his workers and especially to reduce the heavy turnover that had many departments hiring 300 men per year to fill 100 slots. Efficiency meant hiring and keeping the best workers.[23]
Ford astonished the world in 1914 by offering a $5 per day wage ($120 today), which more than doubled the rate of most of his workers.[24] A Cleveland, Ohio newspaper editorialized that the announcement "shot like a blinding rocket through the dark clouds of the present industrial depression."[25] The move proved extremely profitable; instead of constant turnover of employees, the best mechanics in Detroit flocked to Ford, bringing their human capital and expertise, raising productivity, and lowering training costs.[26][27] Ford announced his $5-per-day program on January 5, 1914, raising the minimum daily pay from $2.34 to $5 for qualifying workers. It also set a new, reduced workweek, although the details vary in different accounts. Ford and Crowther in 1922 described it as six 8-hour days, giving a 48-hour week,[28] while in 1926 they described it as five 8-hour days, giving a 40-hour week.[29] (Apparently the program started with Saturdays as workdays and sometime later it was changed to a day off.)