Rebel Pride - How Idiotic is That? 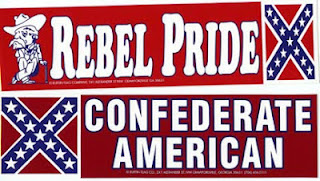 In recent years, a new movement has emerged, called the "Rebel Pride" movement.   People removed by generations from the Civil War are claiming to have "Pride" in their "Heritage" while at the same time claiming that the rebel flag represents "Heritage, not Hate!" - I suppose the same argument could be made by Germans, regarding the Nazi flag.  Shameful historical events are nothing to be proud of.


Genealogy is bunk, as I have noted before.  If you go back more than a few generations, you end up with so many damn ancestors that, well, you are basically related to everyone.  So when I see people waving Confederate flags and claiming it is part of their "heritage", I have to cry "Bullshit!" at full volume.

And the idea that you should be "proud" of this "heritage" is also nonsense.   What the rebels did in the Civil war was nothing short of terrorism and war crimes.   Confederate "Raiders" would venture in to places like West Virginia, and then kill off everyone in small towns, much as the Taliban does today.   And the treatment of Union prisoners in Andersonville is on a par with Auschwitz.

And this is not even taking into account the whole slavery thing - the wholesale enslavement of an entire race, the beatings and torture of slaves, the rapes and murders, the lynchings, and so on - much of which did not end with the civil war, but went on for another 100 years - under the same Confederate banner.

And yes, the Civil War was all about slavery.  Please don't give me this "States Rights" shit - the right the States were arguing about was the right to keep slaves.

But what is even worse about the Civil War was that it was a classic case of baiting and poor normative cues at work - where wealthy plantation owners (including my ancestor, Col. Robert Thompson, and no, I have no "Rebel Pride" for him) who owned hundreds, if not thousands of slaves, were able to convince poor white trash farmers (likely the ancestors of the "Rebel Pride" people of today) that it was in their interest to fight and die for a "Rebel Cause" that meant little or nothing to a tenant farmer.

Yes, Col. Thompson surely looked resplendent on his white horse and tailored uniform, standing in the rear and urging his foot soldiers to "charge" enemy emplacements.   And like many of the military men of his time, his training and tactics were outdated or non-existent.  And when hundreds of the white-trash farmers he lead into battle were slaughtered, no doubt he shrugged his shoulders and was awarded a medal as a hero of Dixie.

Of course, all wars work this way - people at the top use jingoism, patriotism, and all sorts of emotional arguments to convince the poorest and dumbest members of our society to march off into withering machine gun fire.   You never see smart people - or people from the upper classes - in the infantry.

And how wealthy Southerners were able to convince dirt-farmers (who owned no slaves) to "fight" for the "Rebel Cause" is an interesting example of how this worked.   If these same dirt-farmers thought about it, they had more in common with the people they were fighting to keep enslaved.   And the plantation owners, with their enormous estates encompassing thousands and thousands of acres, were more of a threat to their livelihood than anything else.

Today, in an ultimate note of irony, many of these same dirt-poor people wave rebel flags and proclaim their "Rebel Heritage" - and vote Republican, not realizing that the GOP was the same party that was in power when the Civil War started.    Yes, Abraham Lincoln was a Republican.   I wonder which party he would join if he were alive today?

And just as in the Civil War, this "Rebel Pride" nonsense is just an emotional argument to get really poor and dumb people all riled up and belligerent - and as a cover for racism.    Waving around the rebel flag - the same flag waved around during lynchings - is not an act of hate, but "heritage" we are told.   It is a perfect cover for a lot of subliminal messages and coded symbology.

And it is utter nonsense.   Some doofus living in a trailer in Georgia has about as much "connection" to the "Lost Cause" as anyone else.   Once you get 5 generations or more away from something, you really can't claim some sort of mystical connection to it.  It is just utter bullshit.

This is not to say that being an historical re-enactor is bad (although let's face it, those folks are three shades of creepy at best).  But taking pride is a cause that was not just lost but utterly wrong would be akin to being proud of having ancestors who were Nazis.

Sorry, but that is the truth of it.  And someone has to say it.  This "Rebel Pride" nonsense is just cultural trash.
Newer Post Older Post Home