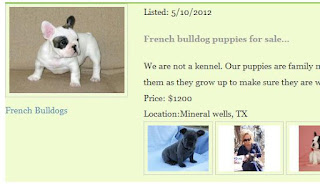 People get ripped off all the time by ads like this, for non-existent bulldogs from Mineral Wells, Texas.  People wire money, which goes to the Russian Mafia, and never get a dog.   But the overarching question is, why would some people pay more for a dog than they would for a car?  It makes no sense.


I recently was exposed to the seamy underworld of the Puppy Scam when my debit card data was stolen.  It was a fascinating trip down the rabbit hole of international scam artistry, an Alice-in-Wonderland journey, which took me from Ontario Canada, to Mineral Wells, Texas, all the way to Moscow, Russia, the home of many of these scams.

And the scam lives on.  In today's mail, this missive:

The credit card vs debit card fraud and came a cross a puppy add that looks familiar?  The company that we were going to purchase a pup from is now advertising under ****bulldogs.com.  I was researching the company and your blog popped up on google.  This ad was posted June 2 and it's selling the same exact puppies?  We are looking into to this place now, but just thought you maybe interested or what to look into who may have taken your $.

Note that it had the notation Sent from my iPad at the end, which didn't have a question mark? after it, thankfully.   Apple users.  Go Figure.  Apparently it changes the way you think - and not for the better.

But should we feel sorry for such people?   Not only are they dumb enough to fall for the wire-transfer scam (which is as old as the hills, in Internet time) but they are putting their desires for a material thing ahead of common sense - the hallmark of such scams.   And worse yet, the material thing they want is a living creature.

(In case you woke up late today, Wire Transfer Scams work like this:  A seller, overseas, advertises a desirable consumer good online, for a fraction of its market value.  People who are desperate to own things bite on this hook.  The seller has a long-winded story as to why the item is so cheap.  But, the victim is told, they need to wire transfer the money right away to seal the deal.   Once a wire transfer is sent, it is gone for good, period.   Anyone can pick it up, anywhere.   And no, there are no secret release codes needed to get the money.   Just walk away from anything having to do with Western Union!).

I wrote before about pets - and how expensive they can be.   A basic dog - not a purebred, either -  can cost you upwards of $1,000 a year to feed and take care of, if you give it the heartworm and flea medications, have regular shots, and at least one veterinarian visit a year.

And while I love my dog, realizing that a dog costs $1000 a year was a revelation to me - and made me wonder how so many poor people, struggling to get by on $20,000 a year can really afford pets.  Over the life of the pet, the owner will spend enough to buy a brand-new car.  Seriously.

But some folks take this even further - they want a particular breed of pet, and will pay hundreds of dollars - often thousands - to buy a pet of a particular breed.  And I hate to say this - as some of my best friends have "breed" pets - but there is something unseemly about it.

It is one thing to want a companion, a friend, a pal, to keep you company.   It is another thing to desire a particular look in your pet, to impress others.   And worse yet, to encourage breeding and designing of animal life, to achieve these certain types of looks.

It is not that just paying $2500 for a dog is a waste of money.   No, there is something sick about it as well.

But today, few people buy such animals for their intended purpose, but rather for their looks.   And indeed, if these breeds had a purpose, their breeding has long since veered off into other directions - mostly for "show dog" looks.   Most retrievers today would not make good hunting dogs.

And the entire "show dog" industry, to me, is just sick.   Creating life and grooming it to win prizes, and nothing else, is just wrong.   And the people who own such dogs behave as though winning a blue ribbon was some sort of personal accomplishment of their own - and not the animal's.   It is creepy and weird, period.  And the people who drive around in vans with "Caution: Show Dogs" on the back are just strange.

So, to some extent, I have no sympathy for people who get caught up in the Puppy Scam.   They put themselves in peril by deciding that they desperately needed something that was a want, not a need.   Once you decide that you "have to have" a $2500 designer puppy, well, even if you get that dog, you are getting ripped off, as you paid a lot of your hard-earned cash for a freaking dog, for chrissakes!

And why do they do this?  Status.   I have met more than one person with a "designer dog" who walks around with their nose in the air at the local dog park.   Their dog is better that yours, they think, and by extension, they are better than you.   It is childish and sick, and moreover stupid.  And an utter waste of money - to try to impress people you don't even know.  And it doesn't work.  No one is impressed!

Again, the easiest way to avoid being ripped off is to decide you don't desperately need something.   The moment you start salivating for a Harley or a Camaro, the local dealer has you wrapped around his finger, and you are screwed, even in a "legitimate" deal.   And when you become that desperate, ads on Craigslist advertising one for half-price sound like a dream come true.  But dreams like that can quickly turn into nightmares.

And the weird thing about pets is, while some people will pay thousands of dollars for one, they basically are throwing away thousands of them, every day, in every city across the country - even purebred designer pets.   To me, it makes no sense.

When we got our first dog, I went to the local shelter in Alexandria, Virginia.   At that shelter, they had a number of purebred dogs, including a beautiful red Doberman, several Spaniels, and of course those obnoxious "Frazier" dogs, who people bought in a frenzy when the show came out, and then discovered that they were basically insane.

Our dog today is a retired racing greyhound.   In terms of bloodline, she is a well-bred dog, with a champion genealogy going back 10 generations.   Total cost?  A $250 adoption and neutering fee.   They basically throw them away when they are done racing them.  They may have been worth thousands of dollars apiece to the kennels that raced them.  But once they no longer race, the kennels give them away to adoption agencies, for free.

Will I have another dog in the future?  Maybe.  Maybe not.   But one thing I can tell you is this:  I would never, ever, pay thousands of dollars for a dog, just so I can show off.   Status is the worst reason in the world, to spend money.

And Status is one of the biggest reasons most people in this country are broke.
Newer Post Older Post Home