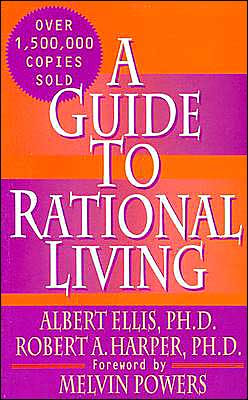 Self-help books were all the rage in the 1970's.
While most of them were bunk, you can gain a nugget or two of truth from some of them.


A reader was searching on the terms "art project ideas about rational and irrational things" which found my entry for "When Rational People do Irrational Things" (such as an airline pilot sucked into an MLM scam).


But the entry also turned up an interesting page on the "Ten Irrational Ideas" from Ellis and Harpers' A New Guide to Rational Living (1975).  Perhaps it is just another one of those mid-1970's psychobabble books, but you can find nuggets of truth in anything.

Rational-emotive behavior therapy consists largely of identifying, disputing, and rephrasing these irrational ideas and others like them.  Once they are rephrased in a way that more accurately depicts reality, it becomes easier to analyze them, see if they are reasonable, or suggest alternative ways of appraising a situation.

The following is a list of Ellis' Ten Irrational Ideas.   What is the most common denominator about these ideas, is that they are constantly harped by the media.   Think about each item, and how the media uses these to distort your thinking processes:

Irrational Idea #1 the "idea that you must—yes, must—have love or approval from all the people you find significant."   We see this all the time in family situations, where people jump through hoops trying to get approval from people who will never grant it.


Irrational Idea #2 is "I must not fail" or, as Ellis and Harper put it, the idea that you must prove thoroughly competent, adequate, and achieving.   This idea is irrational because, in truth, nobody is good at everything, and sometimes people do fail.  In fact, we learn more from failure than success, and many famous and successful people fail at half of what they set out to do.

Irrational Idea #3 is damning. This as the idea that when people act obnoxiously and unfairly, you should blame and damn them, and see them as bad, wicked, or rotten individuals. Some people apply this to themselves, giving themselves up as hopeless. Others turn the blame on someone else. Either way, it is not very constructive.  The public reaction to a scandal, such as the Clinton-Lewinsky affair, is a case in point.  It was damning behavior at its worst.

Irrational idea #4 is awfulizing: the idea that you have to view things as awful, terrible, and horrible when things go wrong.  We see this today in the media, where "ain't it awful" is the underlying narrative to everything, and to even suggest otherwise is to be "out of touch" with reality.  I suggest that the inverse is true - things are actually pretty good in this country, and the "ain't it awful" crowd is out of touch.


Irrational idea #5 is the idea that emotional misery comes from external pressures and that you have little ability to control or change your feelings.  The rational alternative, recommended by Ellis, is control your destiny by taking responsibility for how you interpret and react to events.   I have called this Externalizing behavior in this blog.

Irrational Idea #6 is that if something seems dangerous or fearsome, you must preoccupy yourself with it and make yourself anxious about it.  This is related to #4 above.  We need to worry about the European debt crises, or the national debt, or the deficit, or the price of oil, or war in the middle east.  But worrying  about these things accomplishes nothing, and often these things sort themselves out, over time, and our worrying means nothing.

Irrational Idea #7 is the notion that avoiding life's difficulties is more rewarding than undertaking new challenges.   I am guilty of this at times, preferring to goof off rather than work.  But life without meaning is often a miserable life.  Doing the hard thing is often the most rewarding thing.

Irrational Idea #8 is that your past remains all-important and that because something once strongly influenced your life, it has to keep determining your feelings and behavior today. Perpetual High School, I call it, or obsession with trying to "understand" your parents or childhood.  Move on with life - don't define yourself by the first 1/4 of it.

Irrational Idea #4 is the one most touted by the media and politicians - awfulizing.   If you turn on the news, they are all-too-happy to tell you how awful things are.  Why?  Because making you depressed will make you watch more television.   And politicians know that they can get elected if they can convince you that "everything is awful".   While the stock market has soared since February 2009 and the economy has recovered, you'd never know this if you listened to the media and the politicians.  Many people I know think the economy is still "in the tank" and that the stock market is "down".

These are interesting premises, and I will have to check this book out of the library.   It seems that so many people wander through life, thinking emotionally and irrationally, and wondering why they are so unhappy.  Irrational ideas can never be reconciled.  There is always some new outrage or some new thing to worry about.   They present problems that can never be solved, issues that are never resolved.   And some people, ironically, like it that way - the friend with the perpetual problem.
Newer Post Older Post Home