Why Are Advertisements So Stupid? 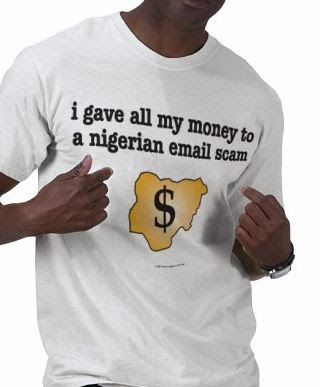 Why are Nigerian Scam e-mails so poorly worded?
Perhaps it is by design.
Advertising works the same way.

A recent article online (I cannot find the source link, sorry) raises the interesting theory that Nigerian Scam Letters are intentionally worded poorly.   Many folks assume that the folks perpetrating these scams do not speak English very well, and thus make the numerous grammatical mistakes by accident.

But a second theory has emerged - one that makes sense.  Either by accident or design, the scammers realize that the more-poorly worded e-mails have a higher success rate.    In other words, the only people stupid enough to respond to such e-mails are the types that are most likely to go along with the con.

If you are so dumb that you can't figure out that a letter chock full of typographical errors, poor grammar, and typed in ALL CAPS isn't from the "Microsoft Lottery!" then you are quite likely to think it might be real and thus send in your money.

It is a form of self-filtering by the respondent that works in the scammer's favor.   A well-worded and professional-looking e-mail might get a curious inquiry from someone who is more sophisticated - and thus more skeptical.   Once the scammer starts spinning his web of lies - and making the pitch for money - the skeptical person will walk away.   The complete idiot, on the other hand, will go along with the deal.

The best way to filter-out the smarter people (who will just waste the scammer's time) is the poorly worded e-mail.   The worst the e-mail is, the more likely anyone who answers it is an utter moron - and ripe for fraud.

And this is one reason why, I think, the scammers like to use weird English - that sounds official and serious.  Money isn't going to be wired to you - no, it will be sent through "certain modalities" which sounds legal or something (and the plebes love that sort of fancy-talk).

But it struck me that most Advertising works the same way - as self-selection filter than steers only morons and true-believers to the company doing the advertising.

The local used-car dealer has a giant inflatable monster with a club to "smash prices" on used cars.   Do people really believe that one used car dealer has significantly lower prices than another?   Yes, apparently some do.   And the moment you set foot on the guy's lot, you've told him all he needs to know about you - that you are Grade-A, prime choice, CHUMP meat, ready to be roasted.

Similarly, no one in their right mind would rent-to-own furniture, take out a payday loan, or send money to an "invention marketer".    But people do - all the time.  And when someone calls, they know they have a fish on the line, ready to be reeled in.   And the advertisements for these types of places tend to self-select the chumps for them.   Who is going to respond to an animated cave-man patenting his wheel or buying ugly houses?  Or the cheaply animated tax man, who promises to resolve all your tax problems?

To most people, these seem like idiotic memes for advertising.  But for idiots, they make "sense" in a weird sort of way - and the folks who like that sort of thing are suckers for advertising.

Liquor ads are the same way - often bizarre or somewhat disturbing.  If you think these ads are "cool" then they have a fish on the line - one that will pay dearly for designer Vodka - the one spirit that really has no flavor to it.

Or take all these "Free Gas" promotions - aimed at the heart of every plebe's "gimmie!" mentality.    When they bite on this bait, it is time to reel them in - and put them into an onerous lease deal, while dangling that "free gas" in their face.

Advertising is stupid - by design.    When you advertise a product, you want to yield not only a high response-rate, but a response rate of purchasers.   You don't want to waste the advertiser's time with skeptics, naysayer, and rational thinkers.

So, instead of saying "we have the best prices and service for car insurance" a company instead will have a disturbing homeless man advertising "the one trick to save you money!"   And of course, there is no "trick" to car insurance - or anything.   But plebes think there are secrets to wealth, and tricks to car insurance, and a secret way to lose weight while eating all you want.

So "one trick of the tiny belly" gets a laugh from anyone with half a brain.   But the desperate fat chick, living in the trailer park, will click on the ad,  and whip out a credit card to buy cake-shakes to lose weight.

And this is why advertising seems like such background noise to most thinking people.   It isn't aimed at us.  It is aimed at people who are easy to scam, easy to convince, easy to persuade.   And that is an awful lot of people.

And this is why I say that not watching television is such a good idea.   While you may think you are skeptical and rational, the more you watch these poor normative cues the more likely you are to believe, well, believe just about whatever they want you to believe.

And what they are selling, most of all, is that you should perceive yourself as a victim of some latest outrage - and comfort yourself by consuming as much as possible.   And many folks fall into this line of thinking - even smart folks.

And before long, they start to think that, "Gee, maybe a Nigerian Oil Minister IS going to send me millions of dollars!"
Newer Post Older Post Home