Should You Be AFRAID of the New Healthcare Law? 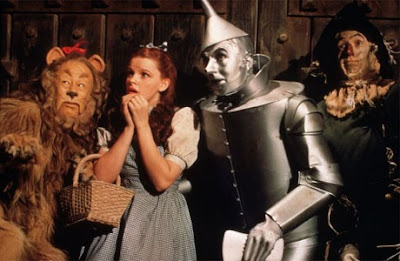 Lions and Tiger and Bears!  Oh, My!


As I have noted consistently, FEAR is one of the least trustworthy emotions.   While it may protect you from danger on occasion, in most cases, it simply makes things worse, or prevents you from taking action.

A better approach is to rationally analyze the danger and then take a logical course of action - as opposed to, say, running around in circles with your hands in the air, screaming.

Or, for example, wearing a tri-corn hat and holding a sign showing Obama as Hitler.

Many people are opposed to the new health care law, and when you ask them specifically why, they get amazingly vague.  Initially, it was the "mandate" provision, that we were told was unconstitutional and moreover a "fine" that would throw people in jail.

At least that was an articulation - and a fair one - of a specific part of the act.

But on Thursday, the hand-picked appointee of George Bush - our Chief Justice - who in anyone's book is not a "Liberal" said what in retrospect, appears to be obvious:  This "fine" is a tax by any other name, and Congress can tax anyone it wants to.

So, the act remains.

And today, the fear-mongers are at it again, telling you how horrible this will be for you, without specifically saying why, exactly it is so bad.

And speaking of vague - the GOP has promised to replace this act, with something else that will "fix everything" but when pressed for details, they evade.

It is like Romney's Immigration Reform plan.  He will revoke the Presidential Order signed by Obama and replace it with a comprehensive immigration reform package.  What is in that package?  Wait and See, we are told.  It will fix everything.

But getting back to Health Care, should you be afraid of this act?   Well, no, again, FEAR is just idiotic.

And FEAR is what is being touted.  We are told this will kill off small businesses - and destroy the economy!  How?  Well, vagueness, again.  In the Law, we call these "conclusory statements" - they state a conclusion without making a real argument.  And no, they don't carry the day in Court.  But in the court of public opinion, you can get away with saying just about anything,

We are told that small businesses will go under, forced to buy expensive health care.  But many small businesses employ part-time help, and may be exempt from providing health care for those employees.
For many businesses that employ younger workers, these costs may be trivial.  When I was 40, my health insurance cost $99 a month through Blue Cross.   This is what is going to break the back of small businesses?

And while this may increase their labor costs, it is hardly a logical conclusion that every small business in America will just close shop.  After all, if it is a cost increase, it is one their competitors are facing as well.  If you have a solid business plan, with a product people want to buy, a slight increase in labor costs is not going to put you under.  It may raise prices, but that's about it.

We are also told that the self-employed will get screwed, and a fake "Association of Self-Employed Persons" is coming out against this.  They claim that someone starting their own company should have the right to be uninsured, so they can plow that $99 a month into their business.

Huh?  Well, this "Self-Employed" group doesn't represent ME, let me tell you.   Health Insurance for the self-employed is a small nightmare, and this act, if anything, will either (a) not change much for me, or (b) make it marginally easier to shop for plans, and also eliminate that pesky "per-existing condition" problem.

So why is this health care plan a bad thing?  How is it different from what he have today?  While the plan may "force" people to buy health coverage - for themselves and their employees, and may incentivize States to provide more lower income health coverage via medicaid - is this really going to "increase costs" or merely rationalize them?

Today, uninsured people end up bankrupt, if they have staggering medical bills.  And hospitals are stuck with these bills, which in turn are passed on to YOU and your insurance company, which in turn passes them back to YOU in the form of increase health care premiums.

There is no free lunch here, unless we pass a law allowing those who don't pay to DIE on the hospital steps.  And that ain't about to happen.

So the uninsured and under-insured stiff us with their bills.  They clog emergency rooms, which they use as a doctor.  And they refuse to get health insurance, because that $99 a month can buy Cable TV or a Jet Ski or a Harley.  And yes, I know a lot of people who make that decision - that a $10,000 deductible plan is not worthwhile because "It don't pay for nuthin'!" but a recreational vehicle is a better purchase.

This plan would force people to realize that (a) they have to pay for their own health care, and (b) that they are not as wealthy as they thought they were.  In other words, this plan prevents a lot of people from foisting off THEIR health care costs on the rest of us, while they blow by us in their straight-pipe Harley, and right into that left-turning car (and on to the emergency room).

It also funds care for those who really can't afford it - taking them OUT of the emergency room and into an inexpensive medical clinic.  My neighbor was on the board of the local Hospital near Mount Vernon,  He helped establish a medical clinic for the very poor and it worked well.  Preventative medicine is so much cheaper than emergency care.  It cleared the ER of patients looking for doctor care, not emergency care.  And it meant the very poor had real preventive medicine.

The hospital faced an economic crises - they were being overwhelmed by gunshot patients from drive-by shootings and drug deals gone wrong.  These patients - very expensive patients - had no insurance and never paid their bills.  The hospital's solution to "cut the budget" was to eliminate the clinic for the indigent.  The ER was once again flooded and things went from bad to worse.

It is a pattern repeated over and over again in the US.

While there are a lot of things that "could be better" in this law, the GOP fails to put forth anything concrete in response.  And Presidential Candidate Mitt Romney signed into law, a very similar plan, when he was Governor of Massachusetts.

So what is going on here?  Vague threats of disaster.  Cranking up the FEAR.  No concrete counter-proposals.

What did I say about FEAR before?  That marketers use it to get you to buy things you otherwise would not ordinarily buy - guns, alarm systems, whatever.   They want you to be depressed and afraid and SCARED above all.  Because scared people can be stampeded into doing anything - like the way the Indians stampeded Buffalo off a cliff.

In other words, it is all a big LIE - designed to get you all riled up about, well about what, they won't say, exactly,

Sorry, but no sale.  Until they can articulate with specificity what the problem is, it is just a smokescreen.

Of course, they play this angle as the problem.  Senator Rubio, who is allegedly a VP candidate for Romney, has said that the "uncertainty" of the law is suppression economic recovery.  Throwing his hands up and running in circles, while screaming like a little schoolgirl, Rubio says that since everything is in such a state of flux, small businesses just don't know what to do and are not hiring or expanding or hiring as a result.

"All that paperwork!" he cries.

Bullshit.  The law will not be that big of a change as people made it out to be.  The same arguments were made about Social Security when it was first enacted.  The Republicans decried it as the end of the USA as we know it.  50 years later, the GOP has embraced Social Security, as they know that their elderly demographic will vote them down, if they try to cut it.

I suspect the same will happen here.  If this law is given a chance to go into effect, people will find out there is really nothing to be scared about.  When 1/3 of the population actually BUYS an insurance policy, instead of using the emergency room, costs for the rest of us will go down.  Yes, this means Cletus has to pay his own way now, instead of buying yet another Camaro to park in his yard.  I am all broken up about that.

But in terms of a radical overhaul of our country? I don't see that happening.  But then again, you don't get elected to office, by saying everything is hunky-dory.

And that, in a nutshell, is what this is all about - power and politics, and a party out of power willing to say or do anything to get into power.
Newer Post Older Post Home