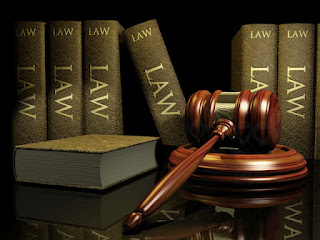 Most folks talk about the Law, without really knowing what it means.

In the debate over the new health care law, people complain that there is "uncertainty" in the new law.  This is not really true - the law has been enacted and anyone can read and interpret it, and smarter minds than you and I have done just that.  The notion that because it is more than 1,000 pages long that "no one has read the whole thing" is nonsense.   Washington Lawyers can read that while they sit on the can.

What creates "uncertainty" is that the law stipulates that appropriate government agencies will implement RULES to implement the law, and right now, we are not sure what some of these rules will be.

What is the difference between a Law and a Rule?  A lot.  And this is why when people say, "The Rule of Law" many Lawyers laugh.   They are two vastly different things.

Well to begin with, our government is administered through a layer-cake - a wedding cake, if you will - of the Constitution, our Laws, Rules, Procedures, and case law.  Each has a different role to play and is played out by a different branch of government.

The Constitution sits atop this wedding cake, providing general guidelines as to the structure of  our government.   A lot of people like to say "Well, the Constitution says this, so we can't do that!" or some such nonsense.  But in reality, the Constitution is not a ten commandments or a Bible - it has only broad outlines of governmental powers and how they interact.  It is up to US (the citizenry, through its elected representatives)  to implement our own laws for our own era - and the founding Fathers realized this.  They did not intend us to stay locked into one mode of operation which was appropriate for the 18th Century.   And this is why the Constitution grants Congress the powers to pass laws - and even allows itself to be amended, if necessary.

By the way, most people have never actually read the Constitution, and claim it says all sorts of things it doesn't. The louder someone screams "unconstitutional" the more likely they are to never have actually read it.  Read it sometime.

Our Laws are the next layer of this wedding cake, and are set forth in the United States Code (USC) which has many sections dealing with different areas of law.  For a Patent Attorney, 35 USC is where we practice, as this portion of the Code deals with Patent Law - in very general terms.

Note that bills are not laws - you will get e-mails from your friends who watch Fox News about how "H.R. 154 is going to take away our guns!" when in fact, it is just a bill proposed by one Congressman, that has never gotten out of Committee.  When someone LIES TO YOU like that, you need to stop listening to them.
While Laws are enacted by Congress, it is up the Executive Branch to enact the Rules to enforce and implement the laws.   These Rules are set forth in the Code of Federal Regulations (CFR) and often interpret the Laws, set forth procedures and standards, and, well, create Rules by which to enforce the Laws.   A Rule cannot negate a law - at least in theory - but only interpret and enforce it.

For us Patent Attorneys, 37 CFR is our Rules Bible - and it sets forth in more excruciating detail, how various matters are to be handled - matters that Congress did not anticipate in great detail.

How are Rules created?  Not by Executive Fiat (and no, I don't mean the new owners of Chrysler).  Rules are Promulgated through one of a number of procedures.  For example, if an agency is contemplating a new Rule, they may ask for suggestions from interested parties, usually by publishing the proposed Rule Change in the Federal Register (always a good read!).   Interested parties can submit their comments, and these, too, are published.  Hearings may be held as well.   Final Rules are then published and implemented.

In other instances, Rules may be promulgated through case law - cases decided by Administrative Law Judges working for the agency.  Weird situations not covered by the Rules or explicitly by the Law are decided, and over time, a body of case law evolves how Rules are enforced.

We used to have a saying at the Patent Office - "You can bend the Rules, but you can't break the Law!"  Simply stated, it meant, that as an agency, we could make Rules - and make exceptions to them - but these Rules could not violate the underlying Law.  So if a Law says that thoughts are unpatentable, we cannot create a Rule that says they are.   However, we can create a Rule stating whether data stored in an electronic memory is a "thought" or not.

Agencies also have Procedures as well as Rules, and these procedures set forth the day to day minutiae of how to run the agency.  For Patent Lawyers, these procedures are set forth in the Manual of Patent Examination and Procedure (MPEP), which really is our "Bible" of operations for both Examiners and the Patent Bar.  If you want to know how to prepare a Petition to Revive, don't look to the Law or the Rules, look to the MPEP.  They will tell you what form to use and where to file it.  That sort of thing.

It may sound somewhat arbitrary and capricious.  After all, Congress can enact a Law, and a hostile Executive Branch can somewhat nullify that Law through Rules changes.   And a President can even attenuate a law by dictating priorities for enforcement (i.e., Procedures).  So, for example, Obama promises to leave medical marijuana alone, if it is legalized at the State level, and the DEA backs off.  Later on, he changes his mind, and the DEA starts shutting down medical marijuana dispensaries.   This shows the folly of relying on the Executive branch - what they giveth, they taketh away.

However, if Congress is really pissed about this, they can pass a new law, explicitly revoking the Rule.  On the other hand, if Congress really don't give a shit about trivial details, they will let it slide.  This prevents Congress from micro-managing the various government agencies.

And of course, if a Presidential Administration creates a lot of unpopular Rules and Procedures, they may be voted out of Office.  This also acts as a "check and balance" on Executive power.  And therein lies the irony - many Presidents run for office, arguing they are going to "pass a Law!" when in fact, they can only create Rules and Procedures.   Only Congress can pass laws, and if your Congress is not on your side, they are not going to pass the laws you want.

Of course, challenges to Rules can also be made in Court, and CASE LAW is another way laws are created.   Courts decide how Rules and Laws are to be interpreted, whether a Rule violates the Law, or whether either violates the Constitution.  Over a period of time (200 years) a body of Case Law develops that defines yet another set of "rules" or "law" that we live under.  For example, when a Cop reads you your Miranda rights, it is not because Congress passed a law saying he had to, or that any Federal Rule says so.  It was a case, brought all the way to the Supreme Court, which decided this.

And Case Law changes over time, despite a nice fiction they use at the Supreme Court, that they never reverse themselves (they do it all the time).  Bowers v. Hardwick ruled that there was no Constitutional right to sodomy.  A few years later, in Lawrence v. Texas, the Supreme Court held that, well, there is.  So much for our right-wing Supreme Court.  (I hear Justice Clarence Thomas was the "swing vote" in more ways than one!  Just kidding).

Now some folks get all pissed off by this, too, claiming the Court is "Legislating from the Bench" - but in fact, it has been doing so for over 200 years, and this is nothing new.  While a Court is not supposed to create new law, by interpreting the Constitutionality of an existing law, it often ends up doing just that by default.   You could argue that Chief Justice Roberts has created "new law" by stating that a "fine" is a "tax".   And this is a Justice who decries Judicial Activism.

So what is the point of all this?  Well, first of all, that you should understand how your own government works before spouting off on something.   People who send alarmist e-mails about how a proposed Bill in the House or Senate is going to take away our right to free speech are missing the point.  Bills are not laws.

And with regard to the health care debate, it illustrates how much of the new Law is based on Rules that have yet to be made - and that is where there is some uncertainty in some people's minds.   But Rules are rarely onerous or unreasonable.  Why?  Because if they are, Presidents get voted out of office, people go to court to get them overturned, or Congress passes laws negating these Rules.

So again, being afraid of the new Health Care law is a little premature, until we see how the Rules pan out.   It seems ridiculous to me that any government agency would promulgate immensely unpopular Rules, as they would raise the ire of the citizenry and Congress.

But again, FEAR sells.   And many people are using FEAR to sell things to you - even their own candidacy.

And instead of trying to work within the framework of the new law - pass new laws improving it or amending it - their only response is to junk it entirely, which would set us back to ground zero and accomplish nothing.

This new law has a lot of features that people already like.  Throwing out the whole thing sounds to me like an extremist solution, particularly when the proposed replacement is just a vague set of promises to "fix things".

Sort of like the proposed all-sweeping GOP immigration reform.  "Trust us, we'll fix everything.  How?  We don't want to give that away just yet!"

Sorry, but to me that is being asked to buy a pig-in-a-poke.   No sale!
Newer Post Older Post Home