Be Your Own Boss! 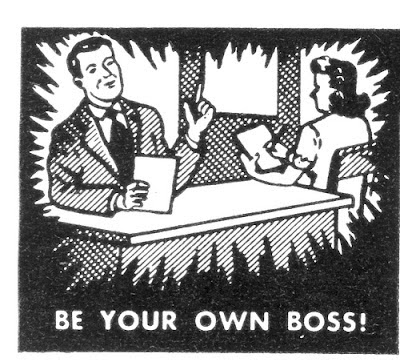 You can make a boatload of money selling the plebes on scams like this.

In the popular media, which normally provides poor normative cues, there are, in fact, some positive social values, or at least there used to be.

One of the recurring themes of The Honeymooners, The Flintstones, and even The Simpsons, were attempts by Ralph/Fred/Homer (really, the same character) to chuck their work-a-day world and strike it rich, with some ill-conceived scheme.

The scheme backfires and hilarity ensues.   Of course, in reality, if a working stiff tried as many cockamamie schemes as these fellows did, he would be utterly bankrupt.  But they illustrate the desire by many working folks to "strike it rich" someday.  And many folks think you need to have some plot or scheme to do this.

Yet all three men ignore the riches they could have, without much effort.  Ralph Cramden, a bus driver for the city of New York in the 1950's, could easily swap his run-down apartment for one of those new houses in Levittown.  With a cushy pension and full health care, he could retire from the city and buy a small house in Florida and spend his remaining days fishing.   Maybe it isn't wealth beyond measure, but in this day and age, it sounds like a pretty swell deal, to most of us.

Similarly, Fred Flintstone, a union laborer at the rock quarry, could likely have retired with a nice pension and good health care - and a little money set aside, if he didn't squander it with all the crazy schemes he and Barney cooked up.  And let's face it, he had a pretty nice house, what with all those modern dinosaur-powered appliances.

And Homer Simpson?  As a safety engineer at a nuclear power plant, he could be pulling down a six-figure salary, and have a fat 401(k) plan, if he wasn't constantly squandering what little they have on hair-brained schemes.

Unfortunately, those normative cues are not touted by the media - so in a way, the "hair-brained scheme" episode is, perhaps, a poor normative cue as it implies that is the only way for an average middle-class person to get wealthy in this country.

But the reality is, you live on less, do without some high-priced junk advertised by the media (smart phones, cable TV, leased cars) and over 30 years you can save up a half-million dollars.  Yes, it can be done, but you have to decide you want to do it.  Few do.  I have no pity for the rest.

But I do try, in this blog, to point out these basic facts.   Maybe someone will take the hint.  Most will not. They will follow the siren song of commerce, the television, and their brain-dead peers, who will sneer at them for having last-year's iPhone (which will force them to go out and get a new one, out of shame).  You can't help some people.

But getting back to topic A - should you "Be Your Own Boss"?

"Be Your Own Boss" is usually the headline used by scam artists to lure the Ralphs, Freds, and Homers of the world to part with what little money they have accumulated.   And for some reason, they do seem to accumulate some money - $5,000 to $10,000 - or they borrow it from Grandma.   Perhaps, after years of saving, they have accumulated only this pitiful amount, and then think to themselves, "Saving is for chumps - there is NO WAY I will get rich this way.  Unless I take what little I have and leverage it!"

Which is akin to gambling at a casino.  You are just throwing what little you have, away.

The "Be Your Own Boss" scams fail on a number of grounds.  First, they are just scams - selling you bogus franchises or MLM marketing schemes.   They claim to give you a "territory" and a "kit" to tell you how to buy old houses and fix them up, or to buy and sell "cash flow notes!" or some other come-on.

And people are so starry-eyed about getting rich, that they fall for this nonsense.   It must work - after all the fellow selling the program is driving a nice Mercedes! (a 2002 E-class, but a Mercedes, nevertheless).

So, these schemes are setup for failure from the get-go.   The guy running the scheme collects a few grand from each patsy, which is all the scheme was really about.   The money isn't enough to be worthwhile to sue over, and guess what?  You'd lose the lawsuit if you tried it.   Selling a money-losing scheme is not illegal, and it is very, very hard to prove misrepresentation.

And no, the Police are not going to do anything except chide you for being an idiot.

Well, it may sound like fun, but running a business is staggeringly hard work.   If working 9 to 5 sounds like a drag to you,  then you don't want to run a restaurant, where the hours can run from from 5 in the morning until 2 AM, leaving you scant time to sleep and shower.  Yes, some folks literally end up living at their place of business.

And the failure rate of new businesses is staggering - fewer than 1 in 10 survive the first year.  Why is this?

Well, to start with, you have to have a good business model - a good location, product, supply of customers, labor force, low overhead, high markup, and the like.  Ill-conceived businesses, like the Coffee Shop in Lansing, open up all the time - and then close down again.

If one of these elements is missing (location, customers, etc.) the business will fail.   And people who have spent years working as employees for someone else are not the best at understanding this.  As a result, most of the businesses that fail, and fail early on, are the ones run by ordinary folks who cash in their life savings for a dream.   And when the dream goes wrong, they go bust.  And they really can't afford to go bust.

And I have seen this, firsthand, happen to friends of mine - who cash in retirement savings or lump-sum payouts to start businesses that do little other than to drain bank accounts.

The second problem is, of course, if you have been an employee for a long time, you may not understand the harsh realities of running a business.   When I was an Associate at the big firm, my friends all told me that "If they ran the place" they would do things differently!  And of course, that meant paying the Associates more and treating them better!  Yessirree Bob!  that would result in more profitability in the long run!  Or so they thought.

Well, "thought" really isn't the right word, when you are talking about wishful thinking or weak thinking.

And these were not dumb people - but Engineers and Law School Graduates.   They were, allegedly, some of the smartest people in the USA - the top 90% to be sure.   Goes to show you how dumb most of us are.

And I did go out and start my own law firm.  And yes, I had some of the same naive ideas that they had - that I would do things "differently" and thus succeed where my bosses had failed.

But very quickly, I realized that the reasons my bosses did things they way they did.   You can't be "nice" to people in a work environment, at least not in terms of performance and pay.  There is a reason why young layers are given work quotas - billable hour requirements - and are expected to fulfill them.  You'll go broke if you don't ride herd over them and make these expensive stallions in your stable pull their fair share of the load.

Similarly, while it might sound like "fun" to provide employees with better pay, benefits, and even little freebies, these do add into your overhead, until you reach a point where you start losing money.

In other words, running a business is brutally hard work, and you can't be "Mr. Nice Guy" about any aspect of it.   You can't let things slide - business is business.

And most people don't get that.  They whine when the bank charges them a bounce fee, claiming it is "unfair" to them.   But they don't get that the bank makes its money from solvent customers and that folks who perpetually have only $50 in their account and bounce checks are just a royal pain in the ass.   The bounce fee is their way of saying, "take your business elsewhere, we don't want it."

(And like most advice a Bank gives you, it pays to listen to it.   They usually are right, you know).

Most Americans like to believe they are put-upon victims of one thing or another.  And this makes them ill-suited to be businesspeople.   And when they do try to run businesses, they fail at it.  And when they fail, they usually blame others for their woes.   It is never that their business plan was no good, that their overhead was too high, or that they simply didn't put enough effort into the business.  No, it was the government, or the competition, or even the customers who refused to cooperate by handing over their cash.

If you are thinking about starting a business or a franchise - or buying an existing one - think long and hard about it.  If you have some money saved up that will carry you through retirement, don't try to "double down" your bet by gambling it all on a business.

Unless you are a very shrewd businessman, odds are, you will lose your shirt.   Few of us have the skills to run a business - which is why they pay successful executives so damn much money.   The guy they hire to lay off all the employees and sell off the unprofitable divisions makes millions of dollars a year.  Why?  Because if they hired you or me, we'd get all weepy about laying off some Secretary, and end up doing nothing but watching the company slowly slide into oblivion.

In other words, we'd let our emotional thinking get in the way.

I learned a lot from running my own business - mostly that I didn't want to run my own business.  Working as an independent contractor has been nice - but hiring people and trying to expand the model is a nightmare of management and overhead.   In order to be successful at it - even modestly successful - you end up having to be a hard-ass and perhaps end up something you never wanted to be, doing things you never wanted to do.  And that is only if you are successful.

And it is interesting, when I think about my bosses from years past.  They were successful - but wildly successful?  Not really.  Even the Senior Partners at some of the firms I worked at, had relatively modest homes.  Few, for example, could afford to buy a $10,000,000 home on neighboring Sea Island.  I wonder if they felt all that work was worth a mini-mansion in a cornfield.

I did end up making money running my own business - but that was the business of buying and renting Real Estate.  And as a business, it was far easier to manage, as it involved managing equipment, not people.  And of course, I was in that business during a time when it was nearly impossible to lose money.  The only hard part, in retrospect, was knowing when to get out.   And I did that pretty well, again by eschewing emotional thinking.

Some friends of mine, wanting to "be their own boss" stayed in the market.   Today they are broke, and working for someone else.

"Be Your Own Boss" - it sounds alluring.  Usually it is a tip-off to a scam.
Newer Post Older Post Home