50 Million Americans on Welfare? Not Really...

Kelly's satiric take on the traditional view of Welfare Queens, from The Onion.

One number bandied about by conservatives is that "50 Million Americans are on Welfare!" which is an alarming statistic, because if true, means that 1 in 6 Americans isn't working, but instead staying home and watching TeeVee all day long.

But like so much else, it isn't really true.  And when you have to resort to lying and deception to make your point, what exactly was your point again?  And that is sad, too, as getting people "off the dole" is a good idea.  But your good idea loses currency when it is clearly based on distortions.

What is "Welfare" anyway?  That is the first problem to address, and if you include everyone who gets a check from Uncle Sam, then the number may be far higher than 50 Million.  Of course, all those conservative retirees collecting Social Security can't be counted as being "on Welfare" because they paid into the system, right?  And their Medicare was all paid for too, right?

Well, not exactly.   Most retirees end up taking out more than they put in, and the system is funded by current income, not money squirreled away in the Scrooge McDuck Money Vault by the Social Security Administration. 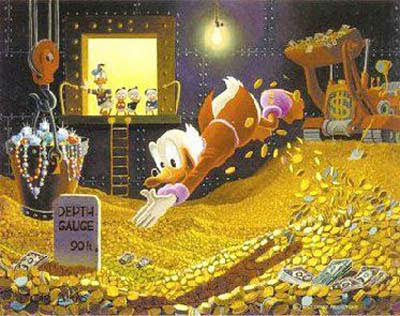 Exhibit A:  The Scrooge McDuck Money Vault.  Most people believe that 'their' Social Security money is being kept for them, here.  No really, they believe that.


So, right off the bat, we don't count the millions of Social Security recipients because if we did, that would add another 50 million to the count.  And the voter demographic we want to get at in order to cut off all those "Welfare Queens" is that 50 million older people on Social Security.   We want them, who are receiving a government check, to cut off the government checks of others - so the taxes of the very rich can be kept low.

Makes sense, in a sick sort of way.  But how many people really are on "Welfare" as we know it?  50 million like the conservatives say?

Whoa!  How did 50 million shrink to 4.4 million?  Well the conservatives have a very inclusive definition of "Welfare" as being any sort of government check you may receive other than Social Security of course!

They count medicaid, which is a program, like medicare, but which provides medical assistance for the very poor - and middle class people who make themselves "look poor" to qualify for nursing home care with medicaid.    Yes, those very same right-wing conservatives will deed their house to their kids, so they look "poor" to the government and can get a free ticket to the nursing home, all paid for by Uncle Sugar.
50 Million people are on medicaid, and that is a scary number.  And it is costing us hundreds of Billions a year.  But of course, this is much better than "Socialized Medicine" or "Obamacare" and donchuforgetit!

50 Million Americans on Welfare?  Try 4.4 Million instead.  Counting the working poor who receive food stamps and Medicaid as being "on welfare" is more than a little disingenuous.  It is an outright lie.

But these 50 million in medicaid are not all on "Welfare" but may in fact be working or retired as well or receiving Social Security Supplemental Income (SSI - the Welfare for the elderly, about 5 Million people).  So of these 50 Million, clearly some of them are the working poor, not "Welfare Queens".

Similarly, there are 40 million people on food stamps, which again is not "Welfare" in the sense of a check you get for not working but an assistance, again mostly to the working poor or elderly.  These are people trying to get by on $20,000 a year or less - often far less.  But they are earning income and they are working - not lazing about waiting for their gub-ment cheese.

And the average Food Stamp allotment?  $150.  No one is getting rich or buying Caviar on food stamps - but the GOP has lots of "friend of a friend heard it straight from the source" saying that folks are.   But that is not hard data, just made-up stories.  And unfortunately, made-up stories don't help us analyze this in a rational manner.

So, what does this all mean?  Well, the idea that 1 in 6 Americans is "living off" the hard work of the other 5 is sort of silly.   More like 1 in 75 Americans is on what we traditionally call "Welfare".  And, oddly enough, this number has not risen much in the last few years.  The number of welfare recipients has stuck pretty much at around 4 million.

This is a far cry from 50 Million and not nearly as alarming.  But that is the point, isn't it?  To get people all riled up about "50 Million on Welfare!!"  They are baiting you.

The number of people collecting Unemployment Insurance, on the other hand, has recently risen pretty dramatically to 10 million and above, which is not too surprising, considering how the economy has been.   However, unemployment benefits are temporary in nature (unless Congress keeps opting to extend them, again and again) and thus not part of a long-term "Welfare State" trend.  This does not keep conservatives from throwing their numbers in the mix, however.  And of course, letting unemployment benefits expire - as they were designed to do - is one way to get this number down, and get people back to work.


So, why do Conservatives lie about these Welfare numbers?  The real numbers are alarming enough - 50 million people on Medicaid, 40 million on food stamps.  But those are the working poor, and you can't get the 50 million people collecting Social Security all riled up about welfare if you set them against the working poor - or use the real number of 4.4 million who are actually on what we traditionally call "Welfare" (e.g., being paid not to work at all).   But if you can convince them that "Welfare Queens" are all buying Cadillacs - well, you've got 'em.  You've got 'em to vote for you.

And like I said, this is a shame, as it prevents a real discussion from taking place.  If all you have to offer is lies and deception, then what else ya got?  Not much, as it turns out.  And one lie invalidates all of your other arguments.

So, the next time Newt Gingrich tells you that 50 million people are on Welfare, call him out on it - and ask him why he isn't counting Social Security recipients in this math.

Let's work to reduce the number of people on Welfare and other assistance programs.  But let's do it HONESTLY, not by setting one group of people against another or by making up alarming and untrue statistics.
Newer Post Older Post Home