When "What If" Becomes "What Is" 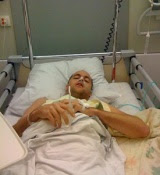 Shit happens, as they say - and often unexpectedly.  Are your finances prepared for unforeseen events - or even foreseen ones?  Think about this before buying some new toy like a car or a cell phone.


In a recent "Oh Woe is Us!" piece on MSNBC, they report gleefully that about 1/4 of Americans have no rainy day savings.  And while they tried to couch this in terms of the "current recession" (which technically is over) the reality of the matter is, in the last 20-30 years, this has pretty much been the case with Americans - a large percentage of us are living hand-to-mouth, not because we have to, but often because we choose to.

And I can say this with authority as I was this way once - spending every dime that came on on payments and bills of one sort or another.   I had little saved for a "rainy day" - but then again, most people in their 20's don't have much saved - they haven't had time to.

And of course, a certain percentage of the population is being rained on, at any given time, and thus might have depleted these savings - and is trying to rebuild them.   So it is not hard to come up with a 25% number at all.   And as the MSNBC article noted, these days, people are saving more than they were five years ago.   Recent events have a lot of people spooked, and rightfully so.   And more and more folks are thinking it is a good idea to own money rather than be constantly renting it.

But of course, this does not bode well for "the economy".   When you stop buying Jet Skis and other stupid purchases, the guy selling Jet Skis lays off a salesman, and maybe a mechanic.   And the guy selling ice and cold beer down by the dock maybe goes out of business.   Saving money, we are told by some folks, is a bad idea - for the economy.

But the economy is not a thing, and moreover, it is not your patriotic duty to spend money, when it is not in your best interests.   You have to look out for your own interests, and in most cases, this means being fiscally responsible.  Let the other fellow buy Jet Skis.

The problem with hollowing out your own finances - levering yourself into debt for houses, cars, credit cards, and whatnot, is that if something bad ever happens, well, you are totally screwed.

What bad things could happen?  Ask around, a few folks could tell you.    You could lose your job, have a medical issue, have a child having a medical issue, wreck your car, whatever.  Shit happens, as they say, and if you life is so leveraged that every penny you make goes to pay off loans, well, then what do you do when either (a) the income dries up, or (b) sudden unexpected expenses crop up?

And I say "foreseen events" in the caption above, as many of these events can be foreseen, either as probabilistic likelihoods, or as inevitable consequences.   It is likely you will have a health crises at some time or another in your life.   It is predictable that you will DIE eventually, and should plan on this.

But beyond hospitals and mortuaries, there are other likely or foreseen events that people should plan on, but fail to do so.    One reader recently asked me if he should cash in his 401(k) or borrow money in a home equity loan to put a new roof on his house.

In his world, I guess, a roof leaking is some wildcard, unforeseen event, like the comet that took out the Dinosaurs.  One minute you have a roof, and then the next, BAM!  Meteorite.

But in reality, a asphalt shingle roof on a home has a design life of about 15-20 years, depending on the quality of the shingles used and the quality of installation.  Many contractors use "15-year" shingles, which rarely last that long, while others may use 30-year shingles - but don't count on them being around over 20.

Ditto for home appliances - which last 10-15 years at best.   If you are out shopping for new cars and have 12-year-old appliances in your kitchen, ask yourself if you've set aside enough money to replace them, down the road.

If you look at your life in terms of these predictable, foreseeable events, as well as the likely probable events, you realize you are not as wealthy as you thought you were.   The cost of a new stove is hanging out there over your head just as sure as a car payment, even if the current one is "only" ten years old.  If you save up and set aside money, then when the control panel finally blows out, you can go out and buy a new one, instead of just scrambling to see which appliance company will finance you on onerous terms.

Sorry, but poor financial planning is not something I feel sorry for.   These same people who complain about living 'paycheck to paycheck' often have smart phones, cable TV, and a new car in the driveway.  And I know this, because some of them are friends of mine...
Newer Post Older Post Home