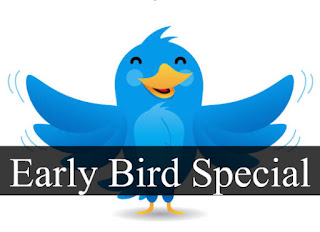 Restaurant Pricing is very elastic, and early bird specials are proof of this.


When we lived in Pompano Beach, we used to make fun of the old people, lining up at 4:30 for their "Early Bird Specials!" at the local restaurants.  But of course, as retirees on a fixed income (who were basically passed out by 8:30) such specials made a lot of sense to them.

And you can find some great restaurant deals, if you are willing to look for them.  And no, I don't mean on Groupon or some other stupid bullshit.

I just had a nice lunch at the Grand Dining Room and the Jekyll Island Club - the same dining room J.P. Morgan (of Match Game fame, not) once dined at.


The club offers special discounts on occasion, including a lunch special for $12.50 which includes soup or a salad and a predetermined entree.  We had a lovely salmon, which was broiled until it was crisp on the outside, and tender and flavorful on the inside, topping a small bed of rice.   Wash it all down with their House Label Demi-Sec Champagne (one must always have Champagne, or at least a good Cava) and lunch for two is about $50, plus tip - about 35% off what we would have ordinarily paid.

UPDATE 2020:  The Club hotel has new owners, and these amazing deals are no longer offered.  They still have some good food, but prices are a little higher now.

Usually, we consider it a good sign if the liquor bill exceeds the food bill, which it almost was, here.  We also used one of our huge stacks of 10% off coupons (no expiration date, including liquor, thank you Dodi) which allowed us key lime pie for dessert, for free.

Of course, this pales in comparison to the manager's reception at the lobby bar, where drinks are $1.25 twice a month this year, to celebrate the 125th anniversary of the club.  Free Hors d'Ouvres as well.  You can bet we are not missing that!

But other restaurants have "specials" that are really good deals, and you don't need Groupons to get them.

La Grotta is a very upscale Italian Restaurant in the Buckhead section of Greater Atlanta.   It is fine dining at its best, and a three or four-course meal there, with wine, can run into the hundreds of dollars (oh, but it is so worth it!).   We can't afford to eat like that every day.  But on the other hand, they offer a "stimulus package" prix fixe dinner for $24.95 which is one heck of a bargain.  And that includes a glass of wine!

Even your neighborhood restaurant (and by that, I don't mean some faceless tasteless corporate chain) has good deals.   Catch 228, a local bar and seafood restaurant has an "Oyster Happy Hour" from four to six PM where raw or steamed Oysters are 50 cents apiece and beers are as little as a buck.   Wild Georgia Shrimp are enormous, and served with a Buffalo-like sauce.  You really can't beat that - and it isn't expensive.

And of course, we have the Driftwood Bistro, which serves "down home" Southern Georgia cooking, with wine priced at $10 a bottle, with entree.   You really can't go wrong with stuffed collards or shrimp n' grits, washed down with a serviceable bottle of Pinot Noir.   At $10 a bottle, why bother ordering cocktails?

The point is, you can eat out, responsibly.  And by that, I don't mean eating out five nights a week (and ordering pizza the other two nights) and using restaurants as your kitchen.  You do have options.

This is not to say it is a bad thing to splurge once in a while.   But the key words are "once in a while".  Restaurant eating should be a very special and unique experience.   Sadly, for most Americans, it is a refueling stop at a forgettable chain restaurant, and another $49.95 slapped into their credit card, and another Styrofoam container of pasta rotting in the trunk.