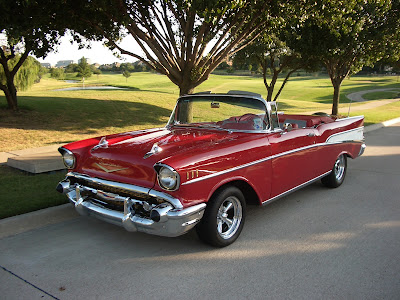 Old cars like this are collectable today.  But back in 1965, a 1957 Chevy was just a clunker you drove to the junk yard.

When I was a child, I spake childish things.  I recall my parents going through an old photo album with pictures of long-dead relatives.   As a kid, a photo of some grey-haired old Aunt Hattie was less than interesting.   But the fact the photo had them riding in my Dad's '58 Ford Fairlane Convertible was interesting!

And my Dad looked at the photo and mused, "Well, back then, it was just another old car, I guess."

And of course, he was right.   It was just an old car, worth nothing after a decade or less, and sent off to the junkyard when it got rusty and dented.   There were new cars to be had, that were better made and better appointed - and more reliable.

As I grew up, I put away childish things - and ideas.   After owning more than thirty cars, I realize that a car is just a thing, and when it gets older, it wears out and its resale value plummets to nearly nothing - to the point where it isn't worth fixing.   And it isn't worth "hanging onto" as a "Collectable" as it would take decades before it would be worth anything in terms of collectability.

And even then, it would only be worth a lot of money if you threw a ton of money at it, carefully restoring it.   And having been to a number of car shows and auto auctions, I can reliably report that most collector cars are worth about half of what they cost to restore.   You can throw $100,000 doing a White Post restoration of an old muscle car, it will be worth $50,000 at best.

Like I said, when I grew up and started owning cars, I realized this.   Reality was a learning experience.   But other people, who are nominally adults, never figure this out.

You expect comments like that from a 15-year-old, but not from a 50-year old.   They sold the car in 1965 because it was rusted out and worn out - and it was worth maybe $100 at that point.  "Saving" a rusty old car for fifty years would have been costly to them (the storage and moving fees alone would be staggering) and even so, it would be little more than a "project car" or parts car at this point.

No, the right thing to do with a junk car, is to junk it.

Unfortunately, this illustrates an aspect of Poverty-Think.   Adult people who think like children.   Big goofy grown-up kids, who think that cars are made of stone and last forever, and are not just collections of worn-out or wearing out parts.

And it is shocking they don't realize this, even as they have driven a dozen or more cars into the ground during their lifetimes.

But it got me to thinking, here is a 50-something adult man, who should be considered rational and mature, and yet he had the attitudes of a teenager.  And not surprisingly, his economic life was in chaos.  He jumped from job to job, always complaining that bosses were "assholes" or the at the company was "fucked up" or whatever.   And he spent money faster than he made it and then asked his parents to help him out financially.  It was embarrassing.

But, we have a nation of such folks - adult infants who engage in weak thinking and moreover, wishful thinking.  And when things don't go their way, they cry like a baby who has lost his binky.

It is sad.   But one of the important steps to getting ahead in this country is to think rationally.   And this means growing up and thinking like an adult, and not falling for poverty-think.
Newer Post Older Post Home