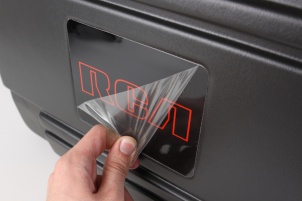 Most electronics, appliances, and even cars, come today with plastic protective shipping covers, to keep parts from getting scratched.   Remove these before putting the product into service.
A reader asks, in response to my posting on membrane switch appliances:

"How can I fix bubbly plastic control panel on my microwave?  It looks like the clear plastic outer layer is peeling off!"

Answer:  Remove it.  It is a plastic shipping cover, not intended to be used when the product is in service.

This may sound stupid to many of you, but I see this all the time, particularly with older people.

With one swipe, I peeled the entire cover off, at which point he gasped, "You've broken it!"

I sighed, "No Dad, that is the protective shipping cover, to keep it from getting scratched.  You are supposed to remove it when you took the TV out of the box, just as you take the Styrofoam packing off the television as well."

He still didn't believe me.

The point of this film is to keep plastic parts from scratching, so people don't return things under warranty, due to scratches from handling and shipping.  You could leave it on, I suppose, but it is not a part of the equipment, just packing material, and eventually, it will peel off by itself, as happened to my Dad, and the reader.

Some manufacturers tried making this film blue, so that people might recognize that it is indeed a shipping material, not part of the product.  Yes, believe it or not, they were getting returns and warranty calls when people complained that "the clear plastic is peeling off my microwave!" 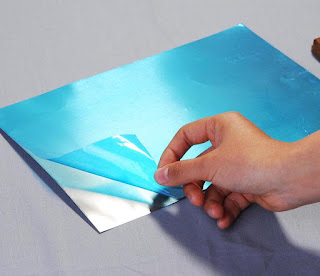 This blue film is commonly used on stainless steel sheets and appliances, to protect the surface from scratches and fingerprint etching during assembly, handling, and shipping.  It is meant to be removed before use, hence the blue color.
But the blue color backfired, as people would see it in the showroom and say, "I don't want a blue microwave!  That would clash with my kitchen!"  Or they would get the microwave home and complain that it was not the white model they ordered, but blue.

Other manufacturers have put little peel tabs on one side, with the notation, "Peel Off".   And of course, usually, the instruction book has these instructions as well, but not always.

It is kind of sad, really, that people are so technically illiterate in a technological world.  We live in a Cargo Cult society, really, where a bunch of primitive apes run around examining the technological relics handed down to them by the Gods.

So, to answer the question posed by the reader, if the plastic film is falling off, chances are, it was a shipping film, and you were supposed to remove it when the microwave was unpacked.