Everything Old is New Again 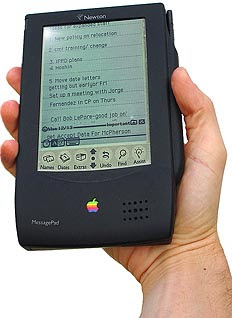 The Apple Newton, as well as a host of other "Personal Digital Assistants" were supposed to change the world, back in 1993.   Didn't happen.   Will this time be different?  Perhaps.

Microsoft introduced its own tablet computer today, adding to the piles of pads, e-readers, tablets, and whatchacallits out there on the market.  Are these the wave of the future?  Maybe yes, maybe no.  Maybe we've all heard this before.

Pictured above was something called the Apple Newton, a "Personal Digital Assistant" that was supposed to be a game-changer for Apple.  There were others, notably the Palm Pilot, which also had its brief day in the sun, and has now sunken into oblivion.

What is different today than, say, back in 1990?   Well a few things.  First, people are finally buying more media content online - books, music, television, even movies.   So these devices have some real uses, today, as opposed to the limited uses back then.

In addition, most of these devices today are cell phones, capable of downloading large amounts of data, so you can actually use them to surf the net, download content, and, well, actually do things with them, as opposed to just trying to look cool waving them about.

But the PDAs of the 1990's went away, mostly because people found them to be more of a hassle to use - just another electronic gadget cluttering up their lives.   They PDAs could keep track of notes and store a directory of names and addresses, but, well, that was about it.   And besides, Research in Motion had this cool new toy out, called a "Blackberry" - and everyone wanted one of those, right?

Oh, how times change in the techworld, where product cycles are measured in months, if not in fact weeks or days.

But I suspect that a similar thing may happen in the pad world before too long.  e-Readers of various sorts are quite popular - and a lot of content is being read online these days through iPads, Kindles, Nooks, or whatever.

But I am not sure that the market for $700 digital pads or readers is a very robust one.   Bear in mind that for that price, you could buy nearly two laptops, or three desktop computers.   The concept might be valid, but the pricing, at least for the time being, is whacked.  And while they have a lot more uses today than in the past, you can't write a book using a PDA - only read one.

And just because one platform or model is talked about in the press right now doesn't mean that their market share will remain robust or dominate forever - or even by next week.

It was not so long ago in this country that the big players in the cell phone business were Nokia and Motorola.   Today, both are struggling.  Tomorrow, both could be back on top again.   Blackberry once was the only smartphone you could buy.  Today, they look poised to go bankrupt.  Tomorrow, they may supplant Apple.  Who knows?   And maybe the Microsoft Windows phone and windows pad thingy will be the next hot product (somehow I doubt it, anything that isn't just plain Windows, Microsoft seems to just suck at).

I think the only thing we can predict, with certainty, is change.  We were ready to write the obit on Nintendo just a few short years ago.  Now look at them.   And Microsoft's rise to success is probably the most improbable business success story known to mankind.

And this is why tech stocks are so "volatile" - which is a euphemism for "you're gonna make a mint - or lose your shirt!"   Investing in tech stocks is tricky and risky - and probably not for the average investor.  Just a few short years ago, Apple was in the toilet - all they had were iPods and Macs to sell, and the P/E ratio was out of whack and the stock price a fraction of what it is today.  One hit product with a high profit margin, and it all changes.

But in the tech world, it all can change back, in a heartbeat.   You are only as good as your next product.   I did a number of Patents for a silicon valley tech company, that had become a household word in the computer components business.   They were steadily growing market share with a string of successful products.   But then their latest product turned to vaporware, and overnight they went from hot to not - and ended up laying off most employees, closing offices and downsizing significantly.   They are still in business, still profitable, and still going strong - but in an entirely different field, even located in a different city.

And this experience is not unique.   An industry high-flier can end up on the trash heap, in short order, and either have to remake itself, or die.   And this is not just a problem for small companies - the big boys fall victim to this all the time, including IBM, Sun Microsystems, and now Hewlett-Packard.   Even Motorola is struggling, now that Apple has abandoned their chipset.

If you asked me, 10 years ago, or even 20 years ago, about the prospects for any of those companies, I would have said they were "blue chip" investments.   After all, Sun Sparc workstations were the backbone of Computer Graphics, right?   And IBM - Big Blue - they invented the computer business, right?

Times change, and change relatively rapidly.   And what is startling is that these companies, while down for the count, are not out.  They reinvent themselves as something else.  And then continue to grow and prosper in new directions - the ones that survive.

So, in 20 years, perhaps someone will write an article about pads and readers and say, "Remember the 2010's and how we all had iPads?    I saw one in an antique store the other day!  It was heavy as hell!  How did they ever get along in the era before digital paper?"

Who knows what the future will bring for the tech industry, but uncertainty.   And that's why I don't own a lot of tech stocks.   Because betting on them is just that - gambling.  And I can't afford to gamble with my future.
Newer Post Older Post Home