Throwing Gasoline on the Fire 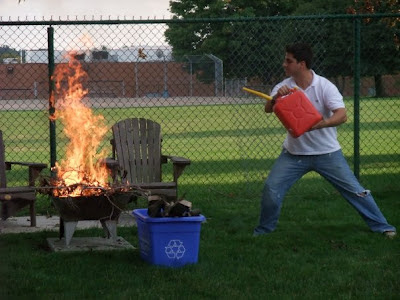 This is a very, very bad idea.

On MSNBC this morning, another "scam" is reported, but again, one that you have to voluntarily sign up for.   Once again, unscrupulous people target our servicemen with really, really bad economic deals.   Used car dealers ring each military base, selling clapped-out Camaros and Mustangs to young servicemen - at 15% interest - who have more testosterone than common sense.

And payday loan places proliferate as well, separating the serviceman from his meager pay.

But what about retirement?   When you get that fat pension check from Uncle Sam?   Well, it don't end there.  Companies will pay you a "lump sum" in exchange for your monthly paycheck.  And like most deals aimed at servicemen, it is a raw deal.   But a voluntary deal nevertheless.

"Struggling with bills, Henry says he answered an ad in the Navy Times and traded 96 months of future pension checks -- totaling $103,000 -- for a lump sum payment of $42,131. He then spent years depositing his government pension checks into a special account so Retired Military Financial Services could take its share of the taxpayer-funded payments and pay private investors with it."

Ouch.  What possesses people to do this?  This is not an "answer" to your bill problems, except in the very, very short term.   If you were diagnosed with an aggressive cancer and had weeks to live, this might make sense.  But here, all the fellow is doing is selling eight years of his pension, in return of less than half the money today.

Yet, the poor and stupid (and I am being redundant here) do this all the time.   They think that "if I can just borrow some more money, I can tide myself over!" - but that is akin to throwing gasoline on the fire.

Borrowed money has to be paid back with interest and the interest rates offered the poor are staggering.  If you are having trouble with bills, then you are poor.   Borrowing money to pay bills makes you even poorer.  Who in their right mind would do this?

For a military pensioner, there are other options, the first being bankruptcy.   If you really, truly have real bills (as opposed to fake ones, like Cable TV and Cell Phones, which can be merely disconnected) you can declare bankruptcy and get a workout on these debts.   And for someone in retirement, who will likely not need credit for much anymore this is a good option.

Your pension, your 401(k), your IRA, and other assets are protected in bankruptcy.   But instead, what "Henry" did was take a protected asset, squander it, and then use it to pay off non-protected debts.  DUMB!

A second option is to sell off a lot of crap, reduce your debt, and reduce your lifestyle to fit your income.  Frankly, this is not an "option" but something you will be required to do, eventually.   I am just guessing here, but "Henry" was either upside-down on a house, or didn't want to sell the Camaro/Harley/Jet Ski or whatever consumer debt he acquired.

Yes, this means selling off all your "toys" and perhaps downsizing to a smaller house or apartment you can actually afford.  It means getting rid of smart phones and cable TV.  And to some folks that sounds "harsh" - but actually it is liberating.   All the electronic gadgets in the world cannot compare to being economically independent.

And yes, I did this, and it is great.  I would rather have a bank balance every month, no unpaid bills or debts than a fancy car, a fancy smart phone, or 500 channels of crap TV.  Selling your soul for garbage makes no sense.

Once again, there are calls that such businesses that prey upon the military should be made illegal.  And while I support this concept in theory, as a Lawyer and a realist, I can tell you that is not the answer.   People have a right to make contracts - strike bargains - even bad bargains.   Protecting people from themselves just doesn't work, half the time.

And moreover, as a Realist, I can tell you that the folks who are offering these "buyouts" are making a lot of money - enough to contribute to Mitt Romney's odious PACs and affect elections.   So good luck passing that law through a GOP Congress.  They will argue that it is "unnecessary regulation of a legitimate business!" and further argue that there are "situations where such buyouts make sense!" (while not saying what they are, of course).

A better approach is to stop being an IDIOT and believing in SANTA CLAUS and jump off the consumerist bandwagon.

Young military men get into trouble because they think they HAVE TO HAVE a Camaro.  No one is forcing them to sign over their paycheck to "Sammy's Military Discount Buy-Here-Pay-Here Used Cars" - it was a voluntary choice to put perceived status over economic reality.

And while you might be inclined to think that a 20-something Hoo-Ha recruit might not know any better, one would at least think that a retiree would have the maturity to think things out for themselves.

But alas, the military does not encourage strategic thinking, at least financially.  Nursed at the teat of Uncle Sugar most of their lives, folks in the military tend to think of money in terms of paychecks and benefits, not in terms of large sums and overall transaction costs.

Perhaps a better approach to this problem would be to provide these recruits with mandatory fiscal training.   Before Uncle Sam hands them a paycheck, perhaps he needs to train them on how to use it.

Heck, you don't hand a young recruit a weapon without training him on how to use it first, do you?
Newer Post Older Post Home