A trip down memory lane.. 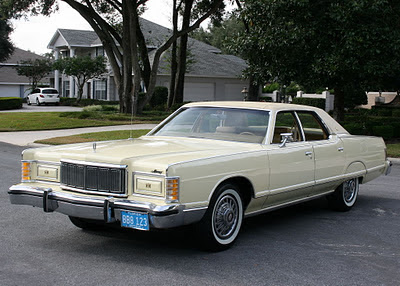 Sleds like this once ruled the mean streets of America.  Nostalgia is fun, but never let it get in the way of reality.

I was cruising eBay the other day, and this seller has the greatest collection of low-mileage old cars from the 1970s.  Big-block Thunderbirds, a long as a city block, with windows set at eye-level, displacing over 400 cubic inches, but generating barely 200 horsepower and getting 8 miles-per-gallon.  Those were the days, eh?

Well, maybe not.  Huge cars whose engines sounded like gravel-in-a-can when you hit the throttle, with the build quality of a third-world slum shack - that was the reality of life in the 1970's, and don't let anyone tell you different.

In 2009, the Insurance Institute for Highway Safety conducted a unique crash test to demonstrate the advances in motor vehicle safety over the last 50 years.  They ran a 2009 Impala into a 1959 Impala in an offset front-end crash test.  The results are startling.

While we tend to think of cars from that era as heavier and thus "safer" - it turns out not to be the case.  Lots of metal, welded on mostly to create fins and other doo-dads, doesn't make for a safe car.  Just lots of metal.  And in the 50 years since real crash-testing has been done, car makers have found ways to make cars safer in collisions - even as they get smaller and lighter.  It turns out that how you use metal is as important, if not more so, than how much you use.

The comments accompanying the video are interesting.  No one believes the test is real - they must have faked it.   The took out the engine, right?  Or unbolted the fenders.  Or maybe it was a rusty underneath?  But the idea that the old "lead sleds" of the 1950's were actually death traps, well, that isn't on the radar for most people.  But read some of the auto safety books from the 1950's and 1960's and you'll realize the truth of the matter.  Cars back then were crap.  And the big criticism of the industry back then was that the companies spent more on style than on quality, safety, or efficiency.

And you see this all the time in old car forums - and it is a form of poverty-think, too.   People drone on and on about the "good old days" and how much better things were back then.

If you actually lived back in that era, you remember the reality of American cars of that time.  Most went to the junkyard at about 80,000 miles.  Very few topped 100K.  With that in mind, the "low mileage" example above, at 63,000 miles, is probably pretty clapped out - and probably ready for a new engine and transmission shortly.  Pretty to look at, but don't use it as a daily driver!

I can say that with authority with regard to the car above (a 1977 Mercury Grand Marquis), as my Father had no fewer than four of them - leased in succession by his company.  Before the end of the three-year lease, they could barely start, much less run.

And the fabled cars of the 1960's and 1950's were not much better, even if they were not choked with the primitive emissions equipment of the 1970's.  That was the era when the phrase "planned obsolescence" came into use.  People complained all the time about how poorly American cars were made - how they rusted to quickly and fell apart so fast.

Of course, given the low prices of cars back then, it was a lot easier for most folks to just trade-in every few years.   Cars were sold on style, not durability.  No one wanted a befinned '59 Chevy in 1965 - it was a rolling billboard to your poor taste by that point - and your poverty.

But things changed in the 1970's.  People got sick of cars sold on style alone, and wanted something solid and reliable.  And companies like Volvo ran ad campaigns that touted reliability, safety, and longevity.  Volvo even had an animated ad that drove home the point that, in the time your neighbors trade-in two, three, or four cars, you could drive one Volvo - that you would own outright.

And perhaps a car that you wouldn't end up dying in, as well.

What the nostalgia people fail to remember is that not everyone wanted a big-block Chevelle back in the day.  The vast majority of cars tooling down the road were just transportation to their owners - just as today.  What people wanted was something that wouldn't bankrupt them, get them where they wanted to go, and not use too much gas.

Funny thing, too.  My late Sister bought a 1970 Volvo back then, secondhand.  It had more rear seat legroom and more comfortable seats than my Dad's Mercury Grand Marquis.  Those huge Fords were all fender and trunk, but very little usable room inside, as it turns out.

Cars have improved greatly in quality, safety, and efficiency, since the "good old days" of the 1960's.  Granted, they don't have the amazing wild styling of the old 1950's Mopars, or the muscle car looks of the 1960's set (although, with the retro-cars out these days, I guess they do).

But they are better cars these days.   A new Mustang or Camaro will crank out 300 HP from the base V-6 engine  and still get over 30 mpg on the highway.  This is more horsepower than you would expect from all but the largest engine options "back in the day" - and better gas mileage to boot.

Plus, if you plant one into a tree, or T-bone it, you are far less likely to kill yourself.  In terms of highway mileage driven and number of drivers on the roads these days, the death toll for automobile travel has plummeted dramatically.

And don't even get me started on the brakes.  Or the crappy, uncomfortable seats.

Yea, nostalgia is a fine and wonderful thing.  But one key to getting ahead in the world is to perceive reality as it is, not as you'd like it to be.  And when you start looking at the world through the cloudy, rose-colored glasses of nostalgia, well, you set yourself up for a lot of trouble down the road.

And funny thing, too.  The folks who engage in a lot of nostalgic thinking tend to be poor and stupid.  The sorts of folks who drive an old car and try to tell you it is "better that that plastic crap they sell today."  A disassociation with reality and poverty go hand in hand.

You know, funny thing, no one gets nostalgic over old computers.  "Old DOS, now that was an operating system!"