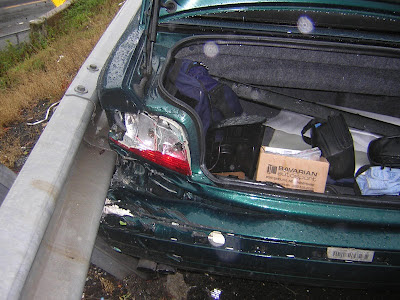 An auto accident can be an emotional nightmare, even if no one is hurt.   How you handle it, however, can determine whether you are even close to being "made whole" or not.


A friend of mine was recently in a wreck, and her experience was very similar to mine.  She was injured in the accident, whereas I just came away with just a sore neck (and probably some hidden injury that will haunt me at age 70).

In both cases, the insurance company tried to "fix" a car that should have been totaled.  And in both cases, it took months to get the problem resolved.

We were driving on the New York State Thruway, near Nyack, New York, a particularly nasty section of "Upstate" (as NYC dwellers call it).  We were heading to the Hudson to look at a boat.  It was pouring rain, and the poorly maintained and narrow road (no shoulders) was not draining at all.  I was in the right lane doing about 50, when a car spun out of control in the far left lane, veered across three lanes and hit me in the left front wheel, spinning me around 180 degrees and backwards into a guard rail.

What a mess.  And an expensive fix for any car, as the rear quarters are welded in.  They loaded the car onto a flatbed, and I called the other fellow's insurance company.  They said that under New York State law, they would total the car out of repairs exceeded the book value.  And since the car booked at $16,500, they would total it out if the repairs exceed 3/4 of that amount.

But the lady at GMAC had other ideas.  She said the tow truck driver could fix it for about $8,000.  Thanks but no thanks.  No doubt it could be "fixed" for that amount, with a gallon of bondo.  I took it to the BMW dealer, instead.

$22,500 later, the car is fixed.  And under the law, I don't have to take it back.  So they call me and offer me $3,000 in "diminished value" to take the car back.  And foolishly, I take it.  Why foolishly?  Well, I didn't need another car at that time (I had six then) but could have used the $16,500.   Also, even though the BMW dealer did a stellar job of welding in a new rear quarter panel and laser-aligning the whole body, the car did have some post-accident "issues" such as top adjustments and a rear window adjustment and a new rear half-shaft replacement.

And a few years later, when I sold the car, it was worth maybe $6800 on the market.  Shoulda taken the money!

(What happened to the car?  It will be sold by the insurance company at auction, and some used car dealer will try to pawn it off on some unsuspecting buyer who cannot see the collision repair.  It may be a good car, or it may have an annoying rattle.   It is hard to tell.  But bottom line is, it should not sell for the same price as an un-wrecked car.  More about that in another posting).

Why do insurance companies do this?  Well, they hope to steer you to a discount repair place that will do quick and shoddy work for cheap, and thus save THEM money.  But it is a huge dent in YOUR wallet, if you let them do this.  Insist on a proper repair and get an estimate from a reputable shop or dealer, if the insurance is paying to have it done - particularly if the other guy's insurance is paying.

Why?  Because if you have a crappy repair job done, you will end up losing a significant amount of money in the deal, as the car will be worth a lot less and may give problems down the road.  And even a stellar repair job won't make you whole. Why? Consider these factors:

Salvage Title:  In some States, if the car repairs exceed the vehicle book value, you are required to register it with a Salvage Title.  This is the scarlet letter of car titles, and you will have trouble selling the car later on, other than for a discounted price.

Inspection:  In some States, a salvage title requires inspection and proof that the car was repaired properly.  Why?  People were welding together two or three wrecks, and then trying to "title wash" them in places like Tennessee and then passing them off on unsuspecting buyers.

Car Fax: Even without a salvage title, the repair and accident may show up on Car Fax.  Mine did, about a year and a half after the accident.  When I sold the car, I was honest and linked the eBay listing to the pictures linked here.  Not everyone is that honest.  That's why there is CarFax.

Hidden Problems:  Another friend had one of those Cadillac Station Wagons (not a Hearse) and after a friend put it in a ditch, they had the rear repaired.  Ever since then, whenever they hit a bump, the entire roof makes an oil can noise, like it is wrinkling under pressure.   Many cars, after a serious accident, can have:

Diminished Value:  All of the above mean that the car is not worth what it once was.  If the book value for the car was $16,500 in good condition, then the resale value drops by several thousand dollars, if it has a record of a "major accident" attached to it, even if the repairs were "properly done".

So, how do you tell if the car should be totaled or not?  And how do you get the insurance company to see the light?  Well, first, figure out what the book value is, and get the insurance company to agree on an amount.   In my case, they picked a high number, hoping to bring the repairs in at under 3/4 that.  That plan backfired (and that lady no longer works there).

Next, refuse the insurance company's kind offer to use their repair facilities or recommended repair facilities.  I did this once with my Camry, and while they did an OK job, I am sure they did not use original Toyota Parts.   Seek out a shop that does good work.  There are high-end shops in every town, such as WagonWerks in Arlington Virginia (which usually does only Porsches, BMWS, and Mercedes, as well as other high-end cars).

Get an estimate first, and make sure you tell the estimator that you want all the charges to be realistic.  Some shops, hoping to get the work, will under-bid the job, and then go for "supplemental" repairs once the car has been taken apart.  This is how repair bills end up exceeding book value.  If the shop tries this low-ball approach, find another shop.

If they do repair the car, be sure to ask about Diminished Value adjustment.  In my case, they gave me $3000 cash to take the car back, and paid for me to fly up to New York to retrieve it.  They also gave me a small amount of money for "soft tissue damage".

(Note: the scope of this article is related to car repairs.  Injuries are a whole separate topic).

Now bear in mind that "totaled" only means the repair costs exceed the book value (which is when any car should be scrapped).  A friend of mine had a $3000 car, which she had collision insurance on (talk about risk-averse!).  When she hit a deer with it, they gave her $3000 (minus deductible) and allowed her to buy the car back for a dollar.  She put a new radiator in it and is still driving it to this day.  Once in a while, you might come out "ahead" in a deal like that, but not by much.

In fact, as I have noted in my other postings on Car Insurance, an accident is not like an all-expenses paid Spa Vacation.  Yet many people buy lots of insurance, saying things like, "Well, my policy promises me an equivalent value luxury car as a rental while mine is being fixed!" - as if this was some sort of great deal or they were planning on having an accident.

Other companies promise you a brand new car even if yours is a few years old.  Of course, such insurance is ripe for fraud, and you can only imagine how the premiums are.

No matter how much insurance you have, you never come out ahead in these sorts of deals.   Your time and efforts are never compensated, and the endless hours on the phone are all lost time.  And any sort of injury, of course, even a minor one, can't be compensated by money. 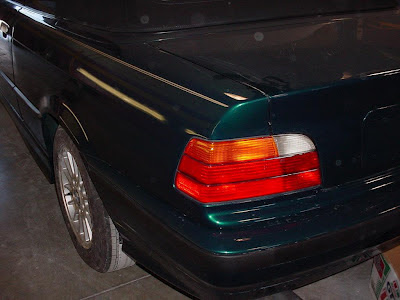 The BMW dealer made the car neatly good as new, but some hidden problems cropped up a few months later.   All in all, I would have preferred to just get a check.  You rarely get "made whole" in these deals, no matter what.
Newer Post Older Post Home