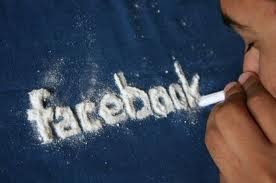 Are you addicted to Social Networking?
A recent advert for a smart phone touts its ability to categorize all of your "friends" into groups - work friends, party friends, family members, girlfriends, ex-girlfriends, and whatever.  In the little 15 second drama, a 20-something "dude" uses his smart phone to group people into categories, and in "real life", all these people jump into little circles.
Pretty silly stuff.   But it illustrates how many young people today spend an inordinate amount of time tracking and logging friends online, through Facebook, Twitter, texting, Instant Messaging, and other forms of Social Networking.
Oftentimes, these "friends" may be distant acquaintances or people they knew from college, high school, or a former address.  Sometimes they are even people they have only met online.  And for some young folks, having as many "friends" as possible is a big deal - often logging hundreds of them on Facebook, as sort of a status indicator (woe be to the person on Facebook who has only three friends!  It is the equivalent of being a wallflower in High School).
High School - that sort of sums up a lot of this Social Networking trend and why it is popular with young people.  Realistically, you cannot have 400 close friends - or even 200.  Chances are, you have less than a dozen friends and perhaps even a smaller circle of intimate friends.
Keeping up with a larger group than that takes a lot of energy.  And that is one reason I stopped using Facebook.   Once you get on it, you have to keep up all these contacts with people.  If you don't respond to pokes, prods, questions, or chats, you end up offending people.  And if you don't go on very often, there may be a mountain of e-mails on there when you do go on, some from angry friends wondering why you did not respond to earlier e-mails.
If you are young and in High School or College, perhaps you have time for all of this.  And yes, a lot of people drift through High School and College, spending more time on socializing and partying than studying and applying themselves.  These kids end up as "OWS" protesters, arguing that their student loans should be forgiven, as their 2.5 GPA won't land them a job.
Compulsive texting, messaging, chatting, and Facebooking - like any compulsive behavior - is not very productive.  It provides the appearance of productivity without doing any actual work.  And moreover, it can be exhausting. Trying to maintain three, four, five or more conversations at the same time is stressful.

If you are wasting time on your computer while a lawn service is mowing your lawn, that should be a wake-up call that something is wrong.

Plugging into this type of network is just as bad as plugging into television for 4.6 hours a day (the national average) and in fact, Internet addiction is quickly displacing television as the new time bandit for many young people.
Facebook doesn't "cost" you anything, but time.  Texting can actually cost money, even if you have an "unlimited" plan.  But the time bandit factor is far more important and costly than even the monthly fee.
Time is the one commodity you have a finite amount of, and it is the one commodity that we squander the most.  And squandering time leads to squandering money.  People claim they are too busy to cook and "just don't have time" to do many things that can help their personal financial decision.  So they send out for pizza and pay extra for "time saving" services.
But, if you look at how they spend their time, they really have tons of time, they just choose to spend it doing things like watching television or social networking.  If you are sitting on the computer while a lawn service is mowing your lawn, that should be a wake-up call that something is wrong.  And that indeed happened to me, which is one reason I got rid of my lawn service, and decided to mow my own lawn.  If I had time to screw around on Facebook, but was paying someone else $50 to cut the grass, I was squandering time, which was making me squander money.
And that is just by way of example.   As I noted in another posting, a lot of people spend hours tending to their virtual farms on Farmville, counting their virtual coins, but can't find 5 minutes to balance their checkbook online.  Which is more important to your personal life and personal finances?
And this entire trend of texting-while-driving is very disturbing.  On a recent 100-mile round trip to Jacksonville, we saw several people doing this.  And they are not hard to spot, as they drift out of their lane and when you look over at them, they are looking in their lap - texting.  What on earth is important enough to risk killing someone?
I wrote before how important it is to conserve emotional energy and often, socializing takes up a lot of this.  Trying to keep up with larger and larger groups of friends, their current topics and their little controversies, is draining.  If you expand your social circle far enough, you will find yourself pretty much spent, at the end of the day, and not getting any work done.
For me, the choice was simple.  I could chat and twitter and facebook, or I could work and make money.  I chose the latter.
Newer Post Older Post Home