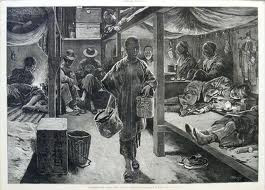 
If you can find something that a group of people are inclined to become addicted to, you can control them very easily.  Figure out your opponent's weakness and exploit it - that is how it works.  As a consumer, the trick is to realize your own weaknesses and then guard against attempts to exploit them.
Compulsive-addictive behavior is present, to some extent, in all of us.  For some reason, however, some of us are more prone to it that others, and certain groups of people seem to be easier to exploit by appealing to their weaknesses and instincts.

For example, the British, tired of paying for Chinese wares with hard silver, found that they could import Opium from India, and then trade that for silk, porcelains, and spices.  What was once a drain on their hard-currency, the China trade became a source for them.  Combined with the tea trade, it made Britain into an empire and largely subjugated China to Western interests for many years.

Similarly, while the use of guns and the introduction of European diseases are viewed as the primary ways that Westerners subjugated (and largely wiped out) the native population in North America, the sale of liquor to the "Indians" is often overlooked.  The native population, not having been exposed to alcohol for centuries (as in Europe) had little resistance to this highly addictive drug.  Indeed, even today, alcoholism on Indian reservations remains above the norm for the US population.

Find someone's weak spot - either intentionally or by happy accident - and you can crush them, politically and economically.  Drugs, alcohol, consumer spending, easy credit, television, the welfare state - whatever you can get people hooked on, will be their downfall.

I noted before, half in jest, that marijuana (and drugs in general) ends up being an excellent way of subjugating an entire populace of young, left-leaning people - sentencing them to a lifetime of low-wage jobs and marginal living.   Today, we have incarcerated an entire generation of young black and Hispanic men for drug-related crimes - and caused untold heartache and violence in their communities.  Better yet, we have them fighting each other in gang warfare, rather than taking out their aggression on the upper class.  Minority groups are far more likely to be victims of crimes from members of their own minority groups.

If you could sit down and design a better system to keep minorities down, you could not do it.  This is not to say there is some grand conspiracy (because I do not believe in conspiracy theories).  But it doesn't matter - the end result is the same, isn't it?  Whether by design or accident, drugs have become this major trap for the lower classes, young people, and liberals.

Similarly, consumerism and easy credit has long been a trap for the lower classes - and now the middle class as well!  EZ-Payment terms, high interest rate loans, and the "take it home today and pay later" mentality have pervaded our society.  Pawn Shops, once the province of Skid Row, are now mainstream.  Bankruptcy, foreclosure, credit card debt, and poor credit ratings have moved upscale now.  Anyone can be broke - even on $100,000 a year!

Of course, some of you might be quick to point out that, if a  person can resist the urge to engage in addictive behavior, you might succeed in avoiding these sorts of pitfalls.  If you don't smoke crack, you won't get addicted!

And yea, it happens to even regular middle-class people.  I recounted the experience of one friend of mine, whose husband, attending law school in a bad neighborhood, came home with a vial of crack one night.  They both smoked a little pot now and then (a habit left over from college, and they saw no harm in it).  The husband, trying to "score" from a local dealer in the city, found that marijuana was hard to come by, but crack plentiful.  26 years old and he decides, in law school, to become a crack addict.

And that first toke is all it took.  Last time I checked, he was in jail for running a meth lab.

Yea, there are some things you just can't try once to "see that it is like" and crack is one of them.  So is heroin or methamphetamine.  And even marijuana can be addictive, although not physically.  Once you start on it, though, it becomes like a religion.  I know, firsthand.  So please, no more e-mails from you so-called "functional marijuana users" out there.  No sale to bad merchandise!

But while few of us are at risk for becoming meth heads - because frankly, most of us are not inclined to even try such a thing, or even know the sorts of people who do it - we are all at risk for being exploited through our various weaknesses.  Understanding this and guarding against it is essential to financial success.

And the marketers know this - and they pander to your vanity, your need for status, your laziness, your tendency to want-it-all now and pay later.  And most of all, your desire to get something-for-nothing, a free deal, or a discount.  And they dangle things in front of you like frequent flyer miles credit cards (the Platinum Card, of course, or perhaps Plutonium would be more appropriate).  It appeals to your vanity and need for status - and your need to feel that you are a "smart consumer" by getting a "good inside deal" that of course no one else knows about.

Well, no one else but the 300 million other people who were bombarded by the same ad and thought, "Gee, maybe I'll be a smarty pants and get one of those Plutonium VISA Cards!  What could possibly go wrong?"

And like a fellow I met a few years back, who tried to argue with me that it was possible to be a "responsible meth user" (I could not get a word in edgewise!) the "rewards" card user will tell you that he has his habit "under control" and he "pays off the balance every month".

"I can control the beast!" he says, but of course, he knows that last month, he didn't pay off the balance entirely and was socked with a few dollars of interest - and not for the first time - and that his vaunted free airline ticket or rewards dollars have been negated by the interest charges.  But an addict never wants to admit defeat.  Well, that is, until they've hit rock bottom, if you are willing to believe the 12-step people.

But, why wait for rock bottom to act?

Realize that we are all just a bunch of Pavlovian dogs - rats in a Skinner box - all to willing to salivate at the sound of a bell, jerk a lever to get a pellet, and generally be manipulated, abused, used, steered, directed, controlled, and otherwise jerked around, all the while believing that we are exercising "free will" in the marketplace, when our free will, oddly enough seems to be what everyone Else's free will happens to be.  That of course, would just be a coincidence.

Embracing the addict within, and realizing they need protection is the first step.  If you go into a candy shop, you will buy candy.  The answer is not to try to lean to restrain yourself in candy shops, but rather just not go in there - if you want to break the candy habit.

And most of all, not watching television and its fire-hose of brainwashing commercials is a great way to not program your brain to spend and want things.

Yea, we all like to think we are Super-men.  "I can withstand temptation," we think, "I can stand in the candy store or ice cream parlor and say 'no thank you ma'am!'".  But the reality is, we are all weak and can be easily manipulated by the media, in ways that run far beneath our conscious level of thinking.  They don't call them the hidden persuaders for nothing!

And as I noted before, the pressures can be very subtle these days, with the Internet and all.  Innocuous discussion groups may create normative cues that fly right under your radar.  Go to a car site, and you will see "sig files" on each posting, listing the number of cars and the modifications they've made.  People compete to rack up credit card debt to have the most bragging rights.   On a cruise website, I've seen the same thing, where people list the 10, 15, or even 25 cruises they've been on, with dates and ship names.  Status - through purchasing.  Did this happen organically?  Was it created by marketers?  Are the marketers just happy it happened?  It would be easy to create such a "buzz" online.

And things like "Viral Videos" are indeed proof of this - humorous advertisements that sell a product, but not directly.  And people will send them to each other, without thinking whether they are in fact being manipulated.

Rather than pretend we are not affected by marketing, I think a better approach is to admit to the problem (the first step is admitting you have a problem, right?) and then try to be more aware of your own potential to be manipulated.