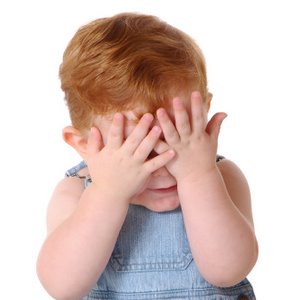 Online news sites are taking peek-a-boo journalism to a whole new level.
Misleading headlines sell.  Back in the day of print newspapers (I guess I can say that now) editors would put sensationalist headlines on newspapers because they new it would sell newspapers.  The New York Daily News was the king of this sort of thing, often using the entire front page to display a single headline.  If you wanted to read the story, you'd have to buy the paper.

It was a method of "baiting" people and it was remarkably effective.

The Internet has taken this to a whole new level, of course.

Online websites like Fox, MSNBC, CNN, Slate, and even the Daily Kos or the Huffington Post, have resorted to these sort of Peek-A-Boo headlines to get you to click on the underlying article.  Many advertisers pay on a per-click basis, and if your site is not generating "hits", no one will advertise on it.

Let's face it, no one is going to click on an article with a boring title.  "Economy doing OK" generates zero hits, while "Experts predict problems, despite recovering economy" will generate millions of hits.  The more enticing you can make the headline, the more likely people will click on the article.

Consider this headline, recently on MSNBC: Nearly unplugged, coma patient now speaking, walking.   "Oh my God!" You might literally say, "they almost killed a guy by taking him off life support!  The right-to-life people are right!"  But that would be an emotional reaction to the story.

The reality was, of course, the kid in question was being treated for a major brain injury, and removing him from life support was discussed - as a possible option down the road - if the treatments were not successful.

But let's face it, a headline of "Man recovers from auto accident, family advised of end-of-life issues as part of routine discussion in major brain injury cases" doesn't generate a lot of clicks and moreover, is just too long.  "They almost pulled the plug on me!" is a more compelling headline, and anyone reading this who works for the New York Daily News is welcome to use it.


But such articles are examples of more irresponsible journalism.  Now, whenever there is another Terri Schiavo, folks will use this "story" as "evidence" that brain dead people can come back to life. It also will guilt all those families out there who had to make a heart-rendering choice to take someone off life support.

To make it clear: Despite what the headline says, no one was talking about "pulling the plug" on this young man, but rather what might happen down the road, if he was not responsive to treatments. And it is clear that they made heroic efforts to treat this man - they hardly were "ready to take him off life support."

But gee golly whiz, the truth doesn't make for a compelling headline, does it? And no one will look at your sidebar ads if they don't click on the links. And without clicks, no click revenue.

So, the internet breeds sensationalist headlines designed to get you to read the article. It is a new variation of the old child's game of "made you look!" and for a legitimate (so-called) news agency, sort of despicable.

What's next? A headline reading "Family of Martians found in Area 57!" - click on the link and you'll discover there is a family named Martian living in a subdivision there. Made You Look!

And that is what I call this sort of thing:  Peek-A-Boo Journalism.  It is totally designed to do one thing:  Make You Look - so they can sell your eyeballs to advertisers.  They will say whatever outrageous thing they have to say in order to get you to look.

And as you become more and more inured to outrageous things, they will create even more outrageous things to say, until you reach a point where everything in the news is outrageous and by reading or watching the news, you get a distorted view of the world, where criminals are ready to head-bash you on a moment's notice and terrorists are ready to blow up your favorite shopping mall.  A scary world where you son will get Gay-Married and your daughter will have serial abortions.  And of course, the economy will tank, taking out your life savings, but only after your identity has been stolen by those no-good welfare queens.