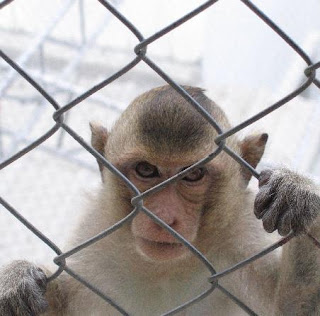 When a monkey can manipulate his environment, he is less depressed.


Recently, I finished some home repairs that I had been putting off.  And finishing these small projects made me very happy - literally ecstatic.  Being able to manipulate your environment and see a result is one sure way to fight depression.

In my case, the project was our laundry room.  Poorly laid out by the previous owner, the washer and dryer were arranged in a dust-collecting corner.  The laundry sink wasn't bolted to anything and wobbled whenever you used it.  Worse yet, it leaked.

I pulled it all apart, cleaned everything, and then rearranged the washer and dryer side-by-side, eliminating the wasted corner.  And I installed a melamine shelf above the back of the washer/dryer so old socks would be less likely to "fall down behind."  It also made a good place to put those giant jugs of liquid soap.

I bolted the damn laundry sink to the wall and re-worked the drain pipe properly, with new pieces and seals.  When I got done with it all, it was clean and neat and easy to use.  But more importantly, I was happy, too, after it was completed.

Being able to manipulate your environment is important in maintaining mental health.  People who feel powerless, passive, and not in control, tend to get depressed.

When I was a lad, we had those Time-Life books about the human body.  The scariest of these was the one about the human mind.  I remember one photo in the book was about a crazy lady getting her hair cut.  The caption mentioned that even changing a hairstyle can help a person improve their self-esteem and fight depression.  And it is true, even small things like that can trigger self-empowerment - the idea that you can control and manipulate your environment.

And this is critical to happy living.  As I noted in an earlier post, Learned Helplessness, when an organism believes that nothing they can do can affect their environment, they simply roll over and whimper in a corner and become depressed.  On the other hand, when an organism realizes that its actions have a direct effect on their outcomes, they become more emboldened, happy, well-adjusted, and successful.

Unfortunately, today, many of us end up the former, through our passive lifestyle - both physically and mentally.  Most Americans work at jobs where what they do doesn't seem to affect the outcome of anything very much.  In many cases, our jobs are so specialized that what we do does not appear to contribute to the overall product or project very much.

Then, at the end of the day, we drive home, in traffic, where our actions are hemmed in by the actions of thousands of other motorists, and often, we are stuck in traffic with no way out, other than to wait.  It is passive, it is frustrating, it is depressing.  We are no longer in control of our own cars - or our own destinies.

Then we get home and flop down in front of the TeeVee and watch the average of 4.6 hours a night of it (I don't watch any, so your typical TeeVee watcher ends up watching more).  They eat some prepared meal or send out for pizza, and then lament about their weight.  Nothing they seem to do will make that extra pounds go away!

And their finances are in ruin as well - nothing they can seem to do will get them out of that "paycheck to paycheck" rut.  And it is a rut - a form of depression.  And not surprisingly, a lot of Americans are in that rut and a staggering number (about 10%) are on anti-depressants.

How do you fight this trend?  By manipulating your environment, any way you can.  If you find yourself depressed, think about your life and how much control you feel you have over it.  And if you feel hemmed in by life, then make changes.  Often, depression is your mind's way of saying that you are unhappy with your situation not yourself.

Even small things can make a big difference, which is one reason why many people have hobbies.  If you make ceramics, paint a painting, fix up and old car, do woodworking, arrange flowers, gardening, or whatever, it gives you the chance to build something with your hands - and demonstrate to your mind that you can alter your environment.

And often, hobbyists end up giving away or selling what they make - as it is the making of the thing that gives them pleasure.   If you read the Experimental Aircraft Association (EAA) publications, you read, time and time again, about people who build their own airplanes, only to sell them when completed and start on another one.  They are less interested in the flying experience as they are in the building experience.  And nothing says "manipulate your environment" than building a machine in your workshop that can actually fly.

We recently completed a small house on our property - a studio for pottery.    And putting it up was the fun part.  You saw, on a daily basis, your environment changing in response to your inputs.  In 14 days, we had the entire shell erected and sided.  From then on, it took months and months of work to finish the inside, insulate, sheet rock, wire, trim, and finish.  Finish work is tedious and time-consuming, compared to framing.  And it seems that you spend hours cutting one damn board and the overall effect isn't squat.

And this is one reason why a lot of people get home improvement projects about 7/8ths done and then stop.  They get used to living in a construction site, and the project is never completed until the day before the house is sold (but more on that in another post).

And the same is true of hoarding, or living in squalor.  People see no point in "cleaning up" the house, as nothing every changes, so they instead get used to living in a pile of junk, and think that nothing they can do will change it, because it is all so much work, to sort through the junk (because it might be valuable!).  On the other hand, nothing says "happy" like a dumpster in the driveway and a shovel to fill it with.  Unfortunately, we have created a crime in this country, of throwing things away - aided and abetted by the Mafia in the trash business, who have convinced us that there is a shortage of places to put our garbage (but nevertheless, will find a place to put it, if you pay them enough money).

And it is no mere coincidence that the actions which tend to make us happy are actions that also are important survival skills.  The hairless ape that sits around and mopes and lives in its own filth, is more likely to be the one that starves to death or dies of disease.  The smart monkey who takes charge of their life, and takes action, ends up happier, healthier, and living longer.  Our brains are programmed this way, by eons of experience and survival.