Law of Supply and Demand in the Job Market 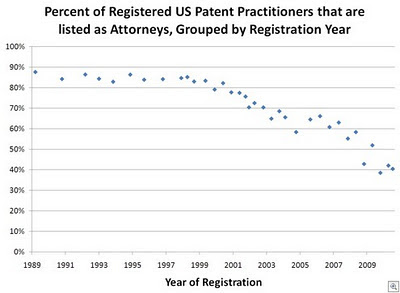 As the demand for Patents increased, more and more Patent Agents became registered, to meet the demand.  The chart above, from the Patently-O Blog, illustrates that Agents, once a rarity, make up more than half of new registrants.  Where there is money, job seekers will go.


Hot jobs won't remain hot forever.  Never get into a field just for the money - the money will never be enough.  But, if you love the work, you will love your job.  And if they are hiring, well, that is a bonus!

Which jobs are "hot" and which are "not" varies over time.  Periodically, the media publishes lists of hot careers to get into.  And while these can be helpful in making a career choice, you should not use money alone as an indicia of success and happiness in a career.

I recounted the story of the Very Annoying Girl at college, who told me that she wanted to be either a Doctor or an Electrical Engineer, as both made "a lot of money."

"But," she said, "Being a Doctor seemed like a lot of work, so I chose Engineering!"

Yes, back in 1982, Engineers were well-paid and in high demand.  Those were the days.  Today it is still a good field, but you will never get rich at it.

She was in the field for the money, and had no natural aptitude for it.  She cheated all through school by memorizing answers from the fraternity house exam files.  Perhaps it isn't cheating the school, but it is cheating yourself.  She never learned anything - never learned to be an Engineer.  And not surprisingly, her Engineering career was remarkably short.  Alumni newsletters can be very illuminating sometimes.

And she annoyed everyone in school - talking in class, complaining about professors who wouldn't use the same exam every year - she even tried to have one professor bounced from the school, claiming discrimination!  His only crime was asking her to shut up in class instead of yakking with her friends.

At the time, it seemed very unfair - after all, with the answers to the Exams, she got good grades and a good job out of school.  But without the real education, it went nowhere fast.  The Karmic wheel goes round and round, rather quickly.

So you young people, don't despair when you see major injustice in the world.  Sometimes the wait is worth  it, and revenge a dish best served cold.  Wait until you see what happens to that "tough kid" who bullied you in High School.  The payout is so totally worth it!  Just be patient.

But getting back to topic, jobs that are "hot" turn into "not" in a real hurry, as people like Very Annoying Girl flood the field and dilute the job market.

Today, they are registering new Attorneys in the 60-70,000 range, and the supply has expanded considerably.  Attorneys with registration numbers of 20,000 and below are dead or retired.  So you can estimate there are maybe 40,000 to 50,000 Registered Patent Attorneys today - nearly double (or more) than 20 years ago.  Demand for Patents has risen, to be sure, the number of applications nearly doubling with the number of Attorneys.  And it appears that demand in recent years has accelerated.

Many of these newly Registered Practitioners, however, are not Attorneys, but Patent Agents, who need only an Engineering degree (but no Law Degree) to practice.   As the demand for Patents has risen, more and more people are chucking Engineering careers (which have stagnated) for the Patent world.

And for them, the salaries are good - but of course, since they work for less and bill out at a lower rate, the net effect is a suppression on prices across the board.  And as the Supreme Court, Congress, and even the Patent Office rein in the scope of protection and enforceability, the value of Patents diminishes, and people are demanding lower prices as a result.

The net effect is that incomes are flat, and even some law firms, with high overheads, have gone bankrupt.

So what is the point of this post?  If you are getting into a field because it is "hot", bear in mind that by the time you graduate and pay off your student loans, it may be "not".  And if you are in the field just for the money, you will likely be disappointed.

For example, in a recent article in the Nooze, they opined that "mining engineer" was the hot ticket today, as all those gold mines and fracking sites are opening up.   Problem is, the gold boom might not be there for the long haul (20-30 years) and fracking sites, once established, require little in the way of labor.   If you choose this major today as a Senior in High School, the lucrative job openings might not be there when you graduate from college.

And this is true for any "hot" field.  Eventually, people wise up and figure out where the jobs are and then gravitate toward them.  People with marginal credentials for a hot fieldo may go back to school to obtain additional credentials to qualify for a certain profession.  Others, such as the Patent Agent example above, may use back-door ways to get into the field - which is why Physicians Assistant is a hot job now - they can do a lot of the work of a Doctor, without nearly half of the training.

But the inverse is also not true.  If you are in a field flooded with qualified applicants, don't think that the market will "turn around soon" and wages will go up.  It will take a long, long time before there is any sort of shortage in your chosen field, once it is flooded with people.

Note that there are some exceptions to this rule.   We are awash in a sea of Dentists and Veterinarians, in my opinion.  And rather than reducing wages, incomes have actually gone up.   Dentists and Vets have done this by gravitating toward wealthy, urban markets and then offering high-end services, which many folks are afraid to question.

A recent article I read on line (I need to find the cite) talked of the shortage of Dentists in places like West Virginia, even though the market was crowded elsewhere.  As one analyst put it, you'd go broke opening a dental practice in West Virginia (where people have "summer teeth") but you'd make a fortune in Princeton New Jersey selling braces to adults - and teeth whitening services.  Wealthy clients will pay more for your services, particularly after you convince them they need them.

And that illustrates why it is important for a patient or client to be skeptical and aggressive (as opposed to passive) when dealing with professionals.  Just because a professional says you need to cough up $4000 for some service, doesn't mean you actually need it.   It just means he needs to make a mortgage payment.

But getting back to the point of this post - never expect your career field to remain "hot" for long.  And in fact, it may go stone cold before you reach retirement age.  Plan on hitting the bricks at age 55, and you won't be surprised when it happens!
Newer Post Older Post Home