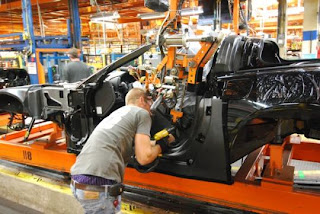 Working in a factory sucks, until you consider the alternatives!
One of our readers landed a nice job recently, and when I went on his employer's website, I nearly had a heart attack.  In addition to getting a guaranteed paycheck every week - where they take out the money to pay your taxes, no less! (no unpleasant surprises on April 15th!) they had a roster of benefits that were pretty staggering.  401(k) plan, defined contribution retirement plan, free gym membership, health insurance, dental insurance (!!), even discounts on cars.

I was sorely tempted to quit my practice and apply there.  Why?  Self-employment sucks, period.

Yea, I know, you say your boss is an asshole - I have the same problem.

But beyond that, think of all the advantages of having a "Job" and you will understand why they are in such short supply:

2.  Withholding:  Your employer takes out taxes, which is mighty convenient.  At the end of the year, you fill out your 1040 and probably get a refund.  We self-employed people have to learn the discipline to pay the IRS regularly, or end up owing a boatload of money (and penalties, for not making regular payments) on April 15th.  It ain't easy, as it is hard to project your income as....

3.  No Regular Paycheck:  When you work for ACME company, they cut you a check every bi-week.  If the company loses money one quarter, chances are, you still get paid.   If you are self-employed and lose money one quarter, you don't get paid.  You never know where your next paycheck is coming from - or when.


4.  Health Insurance:  This is so staggeringly expensive today that as a self-employed person you will quickly move to a $10,000 deductible policy - not by choice, but necessity.  Otherwise, the premiums would bankrupt you.  Think about this the next time you want to say "take this job and shove it!"

If you take these things all together, the idea of "being your own boss" loses its allure rapidly.  Retired factory workers and teachers often have fat pensions and few worries.  Retired self-employed people - if they ever can afford to retire - have to live on their savings, and you never know if you have saved enough.

I think this is one reason the tide has turned against the Unions in this country.  Most of us realize that the cushy factory jobs with full benefits are very comfortable sinecures.  And most of us would give our right arm to have such jobs - and such benefits.  When we see petulant strikers out picketing for yet another dollar-an-hour raise, the rest of us shake our heads and think, "What, are they insane?"

And when the company closes down and the jobs go to China and India, few of us have any sympathy.  I mean, when people strike for six years or more, it is hard to feel sorry for them.  That ain't striking, that's quitting your job.

If you are fortunate enough to have such a job, in this day and age, cherish it and nurture it, and don't fall into the trap that so many do, of taking it for granted.

I worked at a GM plant in Connecticut that employed 8,000 people in a factory of 22 acres under one roof.  A huge place, and no one thought GM would ever close it.  And everyone took the place for granted, and didn't work as hard as they could have - or should have.  And when the factory closed, well, those jobs went away and never came back.

And it is unfortunate, but people get used to their surroundings, then they get comfortable with them, and eventually they become contemptuous of them.  And I've seen, firsthand, how workers can convince themselves, in short order, what a raw deal they are getting, when they are hardly working at all, and being paid 2-3 times the going rate for their labor.

Don't fall into that trap!

And maybe that is what we need to get our country back on track.  We need to stop taking jobs for granted - thinking of them as a "right" and then demanding ever higher and higher pay, just so we can buy more crap.

Because the alternative is pretty grim - massive unemployment and jobs going overseas.  Overseas to people who cherish those jobs, more than we do.
Newer Post Older Post Home