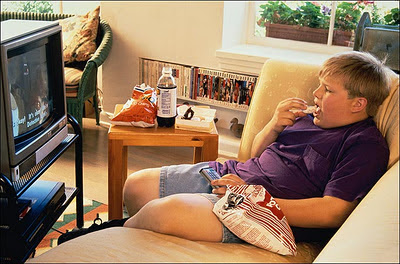 Most people today are as passive as sheep.
Are you passive or active?

Do you DO things, or just watch other people do things?

Do you take initiative or wait for someone to show you how?

Most people today are passive, and it annoys me to no end.

For example, we all have computers these days - for decades.  And yet, so many people I know claim not to know how to do the most basic things.  They ask me to show them.  I show them.  A month later, they ask again.

They do not even try to do things for themselves, as they are "afraid they will break something."

And that sort of mentality is beaten into their head by the media, which wants you to be passive.

Take the show Car Talk, for example.  When it first came out, they actually talked about cars.  Today, it is all about the latest "puzzler" and if someone calls in and asks a question, the answer is never "well, pull the head and do a valve job" but "take it to a mechanic - let an expert look at it!"

And even in auto enthusiast magazines, such as the Roundel, have gone passive.  No longer are actual repairs discussed,  but whether such a repair is covered by warranty.  Not only are we told to take our car to a mechanic, but to take it to a dealer - because only the dealer has the high-tech tools needed to repair the car!

That is, of course, utter nonsense.  People fix cars all the time.  But then again, BMW has sort of taken over the BMWCCA car club, so it is no surprised that "do it yourself" has morphed to "ask the expert!"

Consumerism in general is a passive activity, and the most passive part of it is television watching.  We are a nation of choosers, not doers, anymore.  Our greatest role in life is that of the customer, who is "always right" and whose greatest job is not creating wealth, but selecting which consumer product to consume.

Or which channel to watch.  Our greatest role, we are told, time and time again (by the TeeVee) is that of selector - the arbiter of tastes.  We exist as a Nielsen share, a market segment, a popularity contest, or a political poll.

Your views matter!  Click here to take survey!  No wonder so many scams and cons use "surveys" as a come-on.  We are convinced that our almighty opinion are the most important thing we have.

We are a consumer-based society, we are told.  It is our patriotic duty to consume.  That Jet-Ski isn't just an overpriced toy, it represents Jobs for Americans (regardless of whether it was made overseas).

The problem with this model is that few people create anymore.  And creating things is what creates wealth, for an individual, for a nation.  You take iron ore and coal and you make steel - you create something new from raw materials.   You take canvas and paint and create a painting - worth more than the underlying art supplies.   You type a number of sentences and you create a book - a compendium of ideas.

Today, however, creativity is not promoted or encouraged.  Rather, raw, dumb labor is.  We cut the art program at High School, but subsidize the football team.  We teach rote learning (no child left behind) but not creative thinking.  The few jobs available are low-wage jobs that do not involve any creativity or insight, merely manual labor.

And what is to blame?  Consumerism.  We have sold ourselves to the marketers, a little bit at a time.  And it is happening at all levels.

Our high school cafeteria fired all the cooks and brought in Pizza Hut and McDonald's (and a Coke machine).  The small-town restaurant goes broke, but the mayor welcomes a new Olive Garden! (our motto, just like all the other Olive Gardens!).   We give tax breaks to chain stores while the locals go belly up.  The creative content and individuality of our lives decreases accordingly.  Yes, someone is being creative - at corporate headquarters - creating a menu of choices that is bland enough to appeal to the largest possible populace.  When in doubt, add salt - that always sells.

Getting off the passivity bandwagon is hard to do - it is so ingrained into our American way of life.  And it starts and ends with the television.  And that is one reason I harp on the TeeVee as the destroyer of lives, finances, and families.  So many folks spend so much time glued to it, and doing nothing creative themselves - doing nothing at all.  So many folks "park" their kids in front of it, with a six-pack of Pepsi, and wonder why Junior isn't doing well in school.

Passivity robs us of our soul.  We all have the need to create and be creative.  When our creative outlet is reduced to "what channel to watch" we all die a little bit inside.  And we end up consuming, more and more, to offset this passive lifestyle.  Buying things seems like doing things, in a way.  But it really isn't, even if they make it take up a lot of your time.

And that is an interesting observation right there.  How many consumer transactions these days are all about the transaction - moreso that the product?  A trip to Starbucks isn't about a cup of coffee, it is about waiting in line, making your incredibly complex order (half-caf/decaf espressso double-shot with artificial sweetener, no foam), waiting around for a "barista" to hand it to you, and then marching out, hand held high, label out, announcing to the world your most excellent choice in brand name coffee.

But we are more than just a checklist of brand name preferences.  And in fact, a list of brand name preferences really isn't anything.  Being a Ford man or a Chevy dude is not only meaningless, it is ludicrous.  They are just factories that spit out appliances - often containing the same or similar parts.  But, being brand loyal, or being a FAN, we are told, is all-important.

This is why, when I go to a car meet or a motorcycle show, it is far more interesting to me to see the car or bike or whatever that someone actually built with their own hands, as opposed to the guy who bought a lot of stuff out of a catalog and bolted it on, or the guy who hired a company to build his bike or car for him.  Maybe the dude with the rat bike doesn't have all the fancy stuff, but whatever he has, he put together himself.  Some talent, some creativity was involved.

I would hope that when I die, I do not leave behind a tombstone with the epitaph "He was a good consumer" - along with a list and the logos of companies and suppliers.  I hope that I ended up creating something of my own.
Newer Post Older Post Home