The War on Christmas Trees 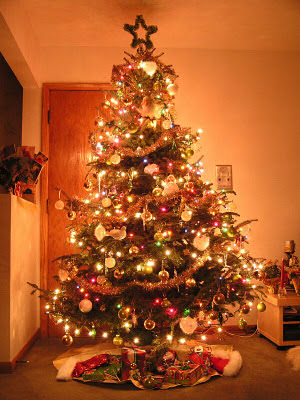 Christmas trees are garish, ugly, expensive, messy, take up far too much space, and a fire hazard.  What's not to like?

OK, about this time of year, Fox News likes to trot out their "War on Christmas" bullshit and blather on about how America's Favorite Holiday is under attack.  What they fail to analyze is perhaps it needs to be under attack.  As a Christian Holiday, it has been co-opted, over the years - in particular, recent years - into a commercial orgy of over-consumption.
We are all expected - nay, forced - to buy presents, decorate our houses, hang wreathes, put on parties and dinners, and, worst of all, set up that damn Christmas tree, a task I particularly loathe.
Now, I know what you are going to say - great, another Grinch trying to destroy Christmas for the kiddies.  But what I am really saying is this:  Why do we all do the same things, year-in and year-out, without analyzing them objectively and rationally?  Why do we let others dictate for us, what our traditions will be - and how they evolve - without taking an active role?
And these things are important.  Christmas was, originally, like Chanukah is for Jews, a minor religious holiday.  Easter is the big deal - the resurrection.  If you are at all a real Christian, the day Jesus rose from the dead is far more important than his birthday.  I mean, it is the whole thing, really.   But we have relegated Easter to a second-rate status.  A basket of candy, a day at church, new clothes, and more overeating.
When he was born is really immaterial.  And in fact, most scholars think that December 24th isn't anywhere near that date.  And in fact, the entire Christmas holiday was created as a way for the early church to subvert pagan Solstice holidays and put them in the context of Christianity (And the church still does this in many countries, adapting local holidays and customs into the Christian context -  It is smart marketing!).  But some Christians - particularly the fundamentalist kind - are starting to question whether the secular trappings of Christmas have overwhelmed the holiday.

Think about it for a minute - when someone wants to describe something ugly and garish, during the other eleven months of the year, what analogy do they usually use?  Yup.  A Christmas tree.

The Christmas Tree is based on a pagan symbol of life and renewal, a form of shrub-worship.  That alone should be reason enough for Christians to say "enough with that, already!"    And of course, it is part and parcel of the entire secularization of Christmas.  Christmas trees, lights, wreaths, etc. have nothing to do with Jesus or Christianity.  And Santa, Frosty, Rudolph and the rest of the gang, really have no place in a Christian tradition.  Anyone at Fox News who defends secular Christmas as part of our "Christian Heritage" really had their head up their ass.  But then again, I am talking Fox News, where head implantation is a job prerequisite.
But the Christmas tree, from an aesthetic, cost, safety, and practicality standpoint, is a nightmare.  Aesthetically, it is just ugly - let's face it.  It is garish, loud, and over-baubled and ornamented.  Think about it for a minute - when someone wants to describe something ugly and garish, during the other eleven months of the year, what analogy do they usually use?  Yup.  A Christmas tree.  "Lit up like a Christmas Tree" is not a phrase that ordinarily follows the word "Tastefully".
But the first problem I have with the Christmas Tree is that it is huge.  Right off the bat, we have to rearrange the furniture to accommodate this beast.  And that is never a good sign.  Setting up and decorating a Christmas Tree is a task that can take hours, even days, particularly if you have to go out and buy one fresh.
Fresh trees are a real nuisance.  You go buy this thing, fill your car with pine needles, then drag it home.  Then you get out a saw and try to cut green wood to fit the damn stand, getting sap all over your hands.  More needles all over the house, while you set it up.   No matter what, there is always a bad side or "hole" in the tree, or it leans or it is bent.  You finally get it set up, and now you have to water it constantly, lest it burn down your house on a moment's notice or just shower your home with dead needles.
Watering it is fun, trying to crawl on your belly with a pitcher of water, to pour into that tiny, leaky reservoir under the tree.  You can buy one of those tree-watering devices (great!  more crap to buy!) but they just leak more water.  You can spot, in any house, where the Christmas Tree is kept, just by the damage to the hardwood floors.
Then, the lights.  They never tangle, right?  And of course, at least one string is dead, necessitating a late-night trip to the drug store to buy another.  And running those un-bendable wires through the sappy and prickly limbs is just a joy.  What crappy engineering. There is no  real mechanism to hold the lights in place, and they just sort of hang there, with the wires plainly showing.

"Lit up like a Christmas Tree" is not a phrase that ordinarily follows the word "Tastefully".

But fear not, if you slather enough ornaments on the tree, the light strings won't show.  Just carefully unwrap those incredibly delicate glass balls that you put away last years and - where's the damn hooks?  What idiot took all the hooks off the ornaments last year?   Someone decided to "save" them so they wouldn't get lost, but problem is, they decided to "save" them someplace very special, and now we can't remember where that is.  So, off to the drug store again, and hopefully they won't be sold out like last year.
Several ornaments are broken, of course.  They are incredibly fragile and break with ease.  More will fall off the tree this year, breaking underfoot, which is always a joy on Christmas Day, to step in ornament shards in your bare feet.  If you have pets, particularly cats, they will of course declare war on the tree, batting at the ornaments until all the low-hanging ones have been broken.  Or they will just piss on it, or, as happened one year, attempt to climb it, with disastrous results (Tim-ber!).
So, now you have this space-hog set up in the living-room-you-never-use-anyway and you stop to admire it for all of about 60 seconds before going back to the family room to watch the Peanuts Christmas Special.  Gee, that was worth it.
You end up putting the lights on a timer, as, let's face it, you basically forget to turn the damn thing on, otherwise.  And again, most are designed to either have a switch underneath (allowing you to conveniently crawl on your belly to get at) or requiring you to plug in to the wall to turn on.  Just move the sofa to get at that plug.  Easy as pie!
A few years ago, we got one of those artificial trees, pre-wired with LEDs.  I figured that it would be a lot easier to deal with, and the LEDs would last forever.  It breaks apart into three pieces, which collapse like umbrellas, into a box, which I shove up into the attic every year.  150 degree temperatures in the attic in the summer act to preserve it.
Even though it is fake, the "needles" fall off it in a shower when you set it up, and it scratches and itches no matter what, particularly as you assemble the sections, which require you to reach inside the scratchy branches to lock the sections together.  When you are done, get out the vacuum to clean up the shower of fake pine needles.  How many years it will last this way, before it is bald, is anyone's guess.
And of course, collapsing it into a box tends to crush all the fake limbs.  So you spend hours pulling them all apart and "fluffing" them up in a vain attempt to make them look real.  But you know the drill - you can spot a fake tree from 100 yards, and it doesn't have that "real tree" smell.  Fake trees are no answer to the problems of real trees, they just have their own problems.  And they are just as tacky, if not more so.
So, given all of this, why do we do this?  Who has the time to do this, anymore?  For many Americans, it is a ritual with no purpose.   You go through all this expense, all this effort, to set up this tree, and then maybe you look at it for a few minutes and then go on with your life.
I suppose it is worth it, if you have small children whose eyes light up on Christmas morning when they see all that loot under the Christmas tree.  And to the eyes of an 8-year old, I suppose a Christmas tree has a certain aesthetic.  But then again, 8-year-olds think Chuck-E-Cheese is tasteful as well.
But once the kids are grown, once they are teens, when you say "Let's decorate the Christmas Tree as a Family!" they say "Whatever!" and go out to smoke pot with their friends, while you and the spouse put up the damn tree, wondering why you are doing it and what ever happened to the mystery and joy of Christmas.
And I'll tell you where it went.  It died from sheer repetition.  Once you do something 20, 30, 40, or even 50 times, it loses its allure.  Only a moron would to the same thing again and again, like Jet Skiing, and think it was interesting.
And the tree has nothing to do with the religious nature of the holiday.  The Jews have the right idea.  You can set up a menorah in minutes.  You go through a religious ritual with it, lighting the candles, and then putting the damn things out before they burn down the house.  No messy pine needles, no huge annual expense.  No garish display.  What's not to like?
Jeremiah 10:1-5 in the Bible says the following:

Hear what the Lord says to you, O house of Israel.  This is what the Lord says: "Do not learn the ways of the nations or be terrified by signs in the sky, though the nations are terrified by them.  For the customs of the peoples are worthless; they cut a tree out of the forest, and a craftsman shapes it with his chisel.  They adorn it with silver and gold; they fasten it with hammer and nails so it will not totter.  Like a scarecrow in a melon patch, their idols cannot speak; they must be carried because they cannot walk. Do not fear them; they can do no harm nor can they do any good."

Some Christians have gone to great lengths to say that this passage is not describing the Christmas Tree, which again, is a pagan symbol.  But I think the key phrase is "they fasten it with hammer and nails so it will not totter" - if that isn't describing a Christmas Tree, I don't know what is.  And of course Jeremiah doesn't call it a "Christmas Tree" explicitly, for obvious reasons.
You will never hear Linus quoting that passage from the Bible, during the Peanuts special!
Newer Post Older Post Home