Paper Goods and Other Supplies 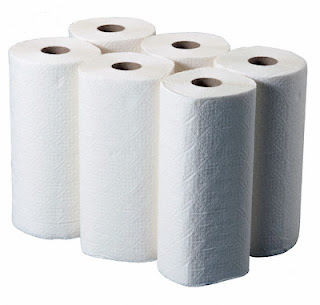 I used to use these to dry my hands after washing them.  Not only was it a bad idea from an environmental standpoint, it was expensive as well!

"Don't you hate spending money on things you throw away? one of my pet peeves. Trash bags, paper towels?"

That is a good point.  Paper goods and other household supplies are not cheap.  These sort of "little things" add up to a lot, over time.

Razors are my pet peeve.  Those special triple-edge jobs are so expensive that many stores lock up the supplies.  Or you buy a big package of them at the discount store, only to find half the clam-shell pack is filled with cardboard blockers.  These things are staggeringly expensive!

By the way, I did a price analysis on those once, and the cheapest ones are the single-edge disposable razors.  But going back to those is hard, coming from double or triple edges.  And I am not sure they last as long.  If anyone has an idea about this - other than growing a beard - let me know.  And I am not sure I am ready for an old-fashioned straight razor, either.

Paper towels are fairly expensive, and if you use them for everything, not only will your trashcan be full, but you will burn through a huge number of them.  It is hard to even compare prices on them, as they are often shown with a "sheet" price (cost per sheet) and yet some rolls have half-sheets, which skews the entire pricing scheme.

Usually the "brand name" rolls are the most expensive, even with coupons.  BJ's always has coupons for the "Brand Name" paper towels, but they are still more costly than the generic store brand.  And the regular price is often double that.  Paper towels can run over a dollar a roll.  That is a lot of money to dry your hands or wipe a counter.

We try to use hand towels from hand drying and reduce our paper towel usage for only certain things (such as cleanups).  Of course, there is no need to use paper towels at all.  Believe it or not, at one time in this country there was no such thing as paper towels for home use.  While the first paper towels were developed as early as 1931, when I was a  kid in the 1960's they were not very common.  In fact, I recall my parents buying the towels, which came packaged with an under-the-counter holder that Dad and I installed with a screwdriver.  It was a big deal and part of the entire "new modern disposable mod 1960's!" deal.

And they suck for cleaning windows, too - leaving lint all over the place.   The best and cheapest way to clean windows is to use vinegar (perhaps diluted with water) and old newspapers. Windex leaves blue streaks and paper towels leave lint.  Vinegar can be bought by the bottle and then poured into an old spray bottle (and labeled).   Newspapers are cheap - or even free.  The local rag sheet sends a free advertising supplement, delivered to my door, every week.  Great for cleaning mirrors, windows, and the like.  Funny, but the cheap or free products work so much better than the expensive store-bought solutions.

Paper towels are really entirely unnecessary to your lifestyle.  And yet, paper towels are the second largest part of the tissue market, second only to toilet paper.  Granted, a lot of that market may be due to the use of paper towels in restrooms, which supplanted the cotton cloth serpentine roll towels we had in the 1960's - but are not being displaced by air dryers.

Pretty neat product - that can go from zero to a big chunk of the market in a few years!  And yet, many folks will tell you they "can't live without them".  I think our consumption has gone way down, since we put hand towels in the bathroom and a ready supply of kitchen towels in the kitchen (which are laundered almost daily).  Granted, the cost of laundering probably negates some of the savings.

And for the sanitary aspect, well, guess what they use in restaurants?  Yea, they ain't going through a billion paper towels every night.

We try to buy these at the wholesale club, which is marginally cheaper than buying them at a grocery store.  Again, though, the problem with buying in bulk is that it encourages consumption.  When you have a lot of a thing on hand, the law of supply-and-demand dictates that you will tend to treat it with less care.  You will view your supply as large and then waste more - it is human nature.

Paper napkins are another area of weakness for us.  I do like them, particularly the well-made ones.  We have a friend who goes to Casinos.  She doesn't gamble, but her family does.  She spends her time stealing all the soaps and napkins from the rooms, which she then gives to us.  So we have a LOT of paper napkins with the names of Casinos on them, and they are really nice - a sort of soft, non-woven spun fiber kind of deal.

Would I buy these?  I suppose not.  And I don't advocate stealing them, either.  And I guess, I should not accept them from my friend, but I guess we'll both burn in hell over the Napkins.  But she is Catholic, so I think she has a get-out-of-jail-free card on that deal (say three hail Marys - what a great religion!).

I supposed one way to avoid expenses here is just to go back to what our forefathers used before "disposable" came into being.  Cloth napkins, cloth towels, even cloth diapers.  Why not?

Well, OK, but I think I have to drawn the line at toilet paper.  If there is one vice of 20th Century civilization, toilet paper is the one I will keep.

Other supplies, such as soap, can be staggeringly expensive as well, as I have written before. But you really can't get away from buying them.  Most are pretty much the same, other than in terms of concentration and price.  The so-called special cleaning ingredients are usually just bleach.  There is not a lot of difference, I find, in laundry soaps.

For the bath, traditionally we all used bars of soap, which always made a gooey mess in the soap dish.  Today, they sell "body washes" in pump bottles.  If you are particularly young and stupid, you can buy stinky "Axe" body washes which allegedly will get you laid more.  I am not sure why young people have such a difficult time getting laid.  After all, they are young and good looking?  We old people just have to turn out the lights.  I think perhaps you get less inhibited as you get older, not more so.

But these liquid soaps are very expensive, compared to the bar kind.  We recently went back to the old school bar soap, I suspect it is about 1/4 the cost of a fancy 'body gel' in a pump or squeeze bottle.

For hand washing, we use an anti-bacterial soap, and I refill those Dial "foaming" dispensers (which I guess are supposed to be disposable, but can be easily refilled).  To make them "foam" you just have to water down the soap by about 3:1, which in turn makes the soap last a long time.

One thing that annoys me about shampoos is that they usually sell them in a twin pack with conditioner, and usually the conditioner lasts twice as long as the shampoo.  So you end up with five bottles of conditioner in your shower, and one very watered-down bottle of shampoo.

As I noted before, I end up watering down the shampoo, as the consistency from the factory is like a gel, and it comes out and slides out of your hand and goes down the drain.

The biggest waste in soap is in over-using it.  Once a certain amount of soap dissolves in water, adding more does not increase the working power of it - as we all learned in science class in the 8th grade (you were paying attention then, right?).  Doubling the amount of soap in your washer doesn't get things twice as clean, it just doubles your consumption and costs.  And yet, it is temping to "throw more in" to get it "extra clean" - or to measure haphazardly or not measure at all.

Trash bags are another area where modern convenience has created a market for a product that just did not exist 60 years ago.  But they are handy, and I am not sure I will give up my kitchen garbage bags anytime soon.  Scrubbing garbage pails, particularly the messy kitchen one, is not my idea of fun.

We recently switched to Waste Management here on the island, and they gave us all new roll-around rubbish bins that the truck can pick up with a mechanical arm.  These are too large for "can liners" and as such, we don't use them.  As a result, our use of black plastic garbage bags has dropped to near zero.

For wastebaskets in the office, bathroom, or bedroom, I either do without (for papers in the office) or try to re-use plastic bags from the grocery store.  These usually fit smaller wastebaskets nicely.  When done, just tie up and toss. And I neatly fold up several extra in the bottom of every can, so there is no excuse not to put a fresh one in, when taking out the old.

However, our supply of plastic grocery bags has dwindled lately.   Yea, we got suckered into buying those reusable bags, and we try to use them, particularly at the wholesale club, where there are no bags.  This has cut down on grocery bags a lot, which is fine with me, as they collect like dust bunnies after a while.

Of course, I did not start this blog to compete with Hints from Heloise, as I think she has covered the waterfront, there.  But it does pay to think of every financial transaction in your life, from a new and different vantage point.  Can I save money here?  If so, how much?  Is it worthwhile?  What are the alternatives?  How did we live before these modern conveniences?

And it is funny, how something gets invented and brought to market, and before long, we all decide it is a "necessity in life" - like triple-edge razor refills, or paper towels, or disposable diapers, or plastic wire-ties, or, well, whatever.  And sometimes these things are new, modern, convenient, fun, better, and easier to use.  But usually, they end up costing us money, particularly disposable items that must be continually replaced - a subscription item, so to speak.  And while tiny in cost individually, over time, these small expenses add up.

I wonder how many other things in my life I take for granted as "necessities" but are actually products for which a market demand was manufactured.
Even just reducing paper product and plastic bag usage (which I think we have done) can save tens of dollars a year.  In the past, we might have used a roll a day of paper towels.  Today, it is maybe a third that.  At a dollar a roll, that is over $200 a year - just in paper towels.   It might not sound like much, but it could be enough for a nice meal in a pretty nice restaurant or three tanks of gas.

See also:  The Death of Paper - large dual displays have cut my paper (and toner) usage by a factor of 10!  They pay for themselves within a year.
Newer Post Older Post Home