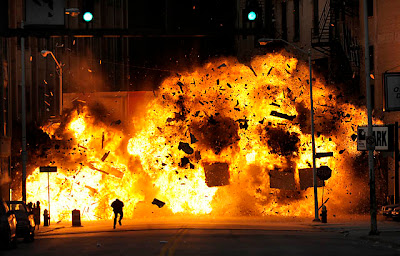 One of the biggest exports the U.S. has is culture, in the form of Hollywood movies.  And for Hollywood, an Explosion Movie is a safe bet.  You don't have to translate 'Bang!' and  'Ka-Pow!'


We just rented, through Netflix, 2012, the movie about the "end of the world" in 2012.  I am not sure how this ended up in my queue, but it arrived the other day in the familiar red envelope.   It is the only movie recently where I watched most of it at 2x, 8x, or even 50x speed.  It is a classic Hollywood Explosion Movie.  What is an Explosion Movie?  They are not hard to spot:

1.  They have a number of usually B-level stars, or A-level stars on their way down.

2.  There is an ensemble cast of actors from all over the world - the target audiences for "foreign sales".  In the case of 2012, this apparently includes Russia and India.

3.  There are more people in the credits for special effects and CGI then there are for live-action.  When they say "lighting effects" they are not talking about a guy aiming spotlights, but rather a man on a computer.  When you see "hair effects" they don't mean hairdresser, but a guy who draws hair for a living.  And when you see three pages of "shaders" you know you have an explosion movie.

4.  Product Placement is rampant - and often done such that you don't notice it.  In 2012, the assembled world leaders meet around a conference table, each with their own VAIO laoptop, with the logos clearly facing the camera square-on.  Could be a coincidence, I suppose.  Oh, wait, this is Hollywood, the land of whores.

5.  The soundtrack is loud and jarring.  If you see this in a theater, you will leave with your ears ringing.

6.  The dialog is just a clanking, wheezing cliche machine.  "Don't go back there!", "Give me your hand!", "For God's Sake, Jump!" - this stuff writes itself and is easy to translate.

7.  The plot is non-existent.  There is a threat to the world, people try to save it, explosions ensue, the hero and heroine finally meet up and view the wreckage as the titles roll.  2012 or Avatar, it really makes no difference.

8.  The Slacker/Striver sub-plot is used (the most popular plot in Holllywood these days, and there are only 11 plots in Hollywood).  The Husband/Boyfriend/Whatever is a slacker, and wants to get his Girlfriend/Wife/Whatever back.  She is "serious" and wants to get ahead and typically has left the Slacker for a yuppie jerk boyfriend.  We all look forward to him getting eaten by the dinosaur.

9. The musical soundtrack features some of "today's hottest artists" who either have written songs for the movie, or had their tunes adapted to it.  The sound track is for sale of course, and that is not by accident, but by design.

So what's the problem with these movies?  Well, they are repetitive, to be sure.  2012 was just a bad remake of The Day After Tomorrow or Independence Day or - whatever.  Hollywood screenwriters, I am sure, get these scripts out of a vending machine near their office - or perhaps give a homeless man a half-eaten hotdog for them.  Often, there are no writers at all, but a "Writer/Director" who ties together CGI and action scenes with a few lines of dialog and a paper-thin plot.  Shakespeare it ain't.

So this is our cultural export.  No wonder the world hates us.  We sell crap - bad movies, fast-food, and global hegemony.  They make a lot of money for the studios, who often make their real profits in "foreign sales."  And these movies, as I noted earlier, are designed for the foreign market, as they have no plot, two-dimensional characters, and little dialog to translate.

And they are full of very poor normative cues.  One recurring theme in these movies is the end-of-the-world, or global destruction, which is just assumed to be a good thing.  When the White House and Capitol get blown up (for the umpteenth time, in CGI) some character quips, "about time someone cleaned up that mess in Washington!" - to which I am sure there were redneck hoots in the audience at the 3-D IMAX theater.

While we may need to improve things slightly in our government, it is hardly "broken" as people like to say (if it is, it has been "broken" for over 200 years).  And whatever we need fixin' in D.C., I am not sure an alien invasion or mega-volcano or a return of the dinosaurs is really the right answer.

The normative cue that Hollywood is selling here is that our society, our Democracy - our government - are not worth saving.  Just blow it all up and start over.  The survivors will have a better time of it.  If you think about this, this is a very depressing normative cue and yet many people buy into it, either consciously or subconsciously.  The whole far-right Christian movement believes it fervently - that the "end times" are near - and that this is a good thing.

I find it disturbing, as not too long ago, this was a country of hope and promise.  We were conquering space, landing on the moon, and soon would explore other planets - perhaps even stars.  Now, it seems, we have just given up and decided to ride our civilization all the way down.  July 21, 1969 was the apex of our culture.  But of course, like 9/11 that was faked, right?  Sigh.

Depression, as I noted in earlier posts, makes people pliable and good consumers.   If you are butt-all depressed as hell, you feel like giving up.  But hey, why not buy a new 580 HP Camaro and finance it on onerous terms?  What the heck, the aliens will arrive and the world will explode before the balloon payment is due, right?

And in this regard, the explosion movie works both ends of the spectrum.  First, it gets you utterly depressed, consciously or subconsciously, by reinforcing the notion that the world is going to end, and moreover that the world ending is a good thing.  This makes you a nice pliable little consumer.  Second, through product placement, the explosion movie sells you all those great Armageddon Accessories for you to buy, now that you just don't care anymore about your own future.  Might as well live for today, right?

So what's not to like about explosion movies?  I guess the special effects and CGI were kind of cool - when the first ones came out over a decade ago.  But after you've seen the White House or the "HOLLYWOOD" sign blow up for the umpteenth time, it kind of gets, well, boring and repetitive.  And there is something very, very disturbing with this trend toward "end of the world" movies - and the fact that people seem to be rooting for the end times.

Maybe I am getting old, but I tend to like movies these days where there is actual dialog and character development, things aren't either on the verge of blowing up, blowing up, or blown up, and it is not posited that humanity deserves to be wiped off the face of the earth.

And it would be nice to watch a movie, for once, that was not a variation on one of the dozen or so plots Hollywood only seems to know.  And please, let's put the coffin nail into the Striver/Slacker plot line.  It is not only overdone, it is ripe with poor normative cues - that young men should be party animals and hang with their "buds", while women are just blank-page two-dimensional characters that always harp about responsibility all the time.  We need to put that to bed.

But, alas, I am not in that 16-35 white male demographic that Hollywood loves to market to.  When you stop buying, they stop talking to you.  Funny how that works!  But to some extent, it is a blessing, as at least they leave you alone.
Newer Post Older Post Home