A House is Just a Place to Live 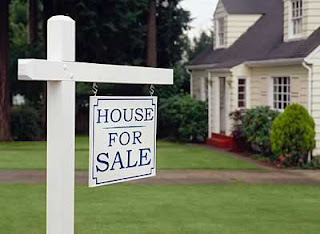 They are not HOMES, they are just HOUSES.  Do not get emotionally attached to material things - it leads only to woe!


The Real Estate industry likes to call them "homes" as in "new home sales" and "existing home sales" as the term "house" sounds so cold, and "home" has all the emotional appeal of a Mother's teat to a young baby.

Now, stop and think here a second.  What have I said all along about how people try to play on your emotions?  And how, when someone makes an emotional appeal to you, they are after your wallet?

Nowhere is this more true than with houses.  Yes, houses, NOT homes.  They are just a structure to live in, to keep you out of the wind and rain, not some sort of family homestead where Grandpa sits on the front porch in his rocking chair making some of that delicious Country-time(tm) Lemonade-flavored-drink-mix made with real corn syrup solids.

Politicians play this game, too.  "Elect me!" they say, "and I'll get you a HOME or keep you in your HOME or increase HOME OWNERSHIP and preserve the AMERICAN DREAM OF HOME OWNERSHIP!"

Here's the deal:  The American Dream has never been and should never be, to own a house.  Rather, the American Dream is the concept that you can live in this country and succeed and prosper on your merits, without interference from anyone, including the Government.  THAT is the American Dream, not owning a bunch of shit.

But the commercial interests in this country want to co-opt the American Dream and turn it into a commercial opportunity to sell you their crapola, whether it is a bloated SUV or granite counter-tops on your end-unit townhouse in Foreclosure Mews Estates.

Why do I say a house is just a place to live?  Because the family homestead is dead, for the most part.  And this is not a bad thing.  Yes, to be sure, there are still a few folks who own homes that date back in the family hundreds of years.  But those folks are few and far between.  And a chain of ownership, like Genealogy, is really just bunk, if you think about it.  You have as little in common with Great-Great Grandpa who built the old homestead as you do with anyone else.  But we like to delude ourselves that somehow this chain of custody, like a chain of paternity, has some deeper meaning and makes us more significant as a result.  Usually, however, these sorts of things are, if anything, stifling.

But even assuming there is some sort of point to saying a home has "been in the family" for generations, chances are, if you are a typical American, you don't own such a home and one isn't in your family.  Chances are, you live in a suburban or urban home, built on spec, and you are the umpteenth owner to have lived there.   You may live there 5-10 years (Five is the average) and then move on.  You will not be birthing grand-babies on the living-room floor.

So, getting attached emotionally to a spec-built suburban crackerbox is nothing short of crazy.  And yet, people do it.  All the time.

I recall, when the Beltway was to be widened, a lady in her housecoat, posing next to her 2-bedroom, 1-bath shitbox, with a line of dying posies outside, saying she would "never move".  After all, this was her "home" and she had lived here for 20 years!

She's right.  Why widen the Beltway, and force her to move?  The needs of a couple million people are nothing compared to the lovely birdbath she put in her back yard.  No really, people think that way.

During the housing boom, this sort of craziness became even more apparent.  In my neighborhood, all the homes were built on double lots, and developers bought these houses, knocked them down and put up two.  From a land-use perspective, it made sense - after all, it would help alleviate sprawl to build homes "closer in" than to move further out.  And in 1949, when the deeds were drawn up, they certainly felt the land should be used for that purpose!

One lady, who had put cement birdbaths and figurines (the donkey with the flower cart, two frogs on the kissing chair, the boy fishing, etc.) all over her yard, told the developer, at the closing table, that he couldn't move her precious ornaments.  He told her, "Yes, Ma'am" and as they drove her off to the nursing home, a bulldozer leveled them all.

Sounds heartless?  Perhaps. But it is just a house, and a poorly built one at that.  And no, no one has the right to say "my cement donkey should stay here in perpetuity".

When the developers came to our neighborhood, we sold out as well.  And yea, we had our own version of the cement donkey in our back yard - to the Nth degree.

When the developer offered us double what our house was worth, though, we made the rational decision to sell.  Why?  Because that house would not be worth that price, probably in our lifetime.  It was literally a once-in-a-lifetime deal.

And yet, others didn't sell, because they didn't want to leave their "Home" - forgetting for the time being that other houses were available for sale, and that, moreover, this wasn't some family homestead, but rather a house they bought less than five years ago - one that was 60 years old and in need of serious foundation work (good old Marine Clay).

They passed up an opportunity to double or triple their investment - to make hundreds of thousands of dollars, for purely emotional reasons.  And yes, I am sure a lot of them are regretting that decision right about now.

Today, a lot of people hurting - severely - because they bought a house, while emotionally thinking they were buying a home.  According to a recent Reuters article, about 22% of homeowners in America are "under water" on their homes - owing more on their mortgages than their homes are worth.  That's better than 1 out of 5 people - and close to 1/4 of the population!

How did we get snookered so badly?  We believed the hype about "The American Dream of Home Ownership." and thought that owning a house was the end-all to humanity.  And we thought that you could make a lot of money owning a house - which as I have noted before is not true, unless it is an income property.

And once we emotionally bought into this model, it was all-too-easy to sign those toxic ARM loan docs and start the whole ball rolling.

1.  For example, I know a lot of people here on the island, who buy 3-4 bedroom houses, even though they are retired couples, on the premise that "the grandchildren" will come to visit.  They pay $100,000 extra on the premise that maybe once a year they can re-enact a Normal Rockwell moment.  And guess what?  It rarely, if ever, happens.  Emotional Thinking!

2.  Still others buy more home that they need, to impress others.  They want a "look at me" house to impress the folks back in the old country, or their friends or neighbors, or to get acceptance from their parents (cut to the chase there - you never get that, so don't bother looking for it!).

3.  Others buy huge houses, convinced that they are getting a bigger tax deduction or making a great investment, based on emotional mantras ("buy as much house as you can afford!") rather than rational ones ("buy a calculator, asshole - and learn how to use it!").

4.  People refuse to sell and move when it makes sense.  A lady sits on her porch in Flint Michigan, wondering "where all the jobs went" and refuses to move, because "this is my home."  Idiot.  A person is offered huge amounts of money for their home during the housing boom, but refuses to sell, convinced they will be "priced out of the market!" if they do, and besides, who rents anymore?

How can you avoid the emotional pitfalls of home ownership?  Simple: Stop thinking emotionally.


1.  It is OK to rent.  No, really.  Owning a house is a never-ending series of chores - mowing lawns, cleaning gutters, and the like.  And the more house you own, the more work there is.  You can pay people to do this (which is what you do when you "own" a condo) but that just means you are spending more money.  Maybe renters don't make out in the long run, but then again, they have far fewer expenses, and often pay less in rent than you do in a mortgage.

2.  Buy a Calculator - Learn to Use It:  If it is cheaper to rent than it is to buy (taking into account ALL the expenses of home ownership and deducting possible tax deductions) then rent.  Why pay more for possible headaches and also the risk of losing your shirt?  If it costs more to buy than to rent, chances are, the market is overheated.  Very few people sit down and do this simple calculation before buying a home.  Most only look at the monthly mortgage payment and try to figure what they can 'afford'.

3.  Do Not Become Emotionally Attached to Material Things:  Even people who consider themselves to value people more than things often allow themselves to be swallowed up in emotional thinking about an old house.  "This old house has so many memories for me!" they say.  But the house doesn't have memories - you do.  Better to move on, when the time is right, than to get all weepy about sheet rock and vinyl windows.  And by the way - who promotes this emotional thinking about homes?  You guessed it!  The MEDIA!  Every other movie and TeeVee show, it seems, has some woman weeping about how she loves her home and doesn't want to move.  Poor Normative Cues!.

Home is where you hang your hat, and that can be anywhere you and your loved ones are - in a yurt, a motorhome, a tent, an apartment, or a mansion.  But what makes a home is the people in it.  The structure itself is only a shell which houses those folks.

It is easy to confuse this hollow shell with the life that goes on in it.  But without the people, it no longer is a home, just a house, and we should all realize that.  The home travels with you, even after you sell the house, or even after it is destroyed by a tornado.

Thinking emotionally is not very smart and in fact, dangerous.  People who want to rob you of your every last penny want you to think like a weeping teenager - all the time.  They want you to be "Emo" - first, last, and always.

Screw the Real Estate Industry!  Screw the "Home Builders"!  They are not selling "homes" - but merely houses.  A home is something you create not something you buy.  All they can do is sell you a place to get out of the rain from.  Never confuse that with a home, and never get emotionally attached to the physical structure.  If you do, they have you - forever!